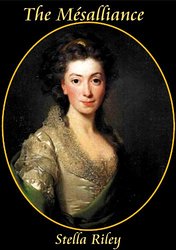 Reluctantly, the Duke of Rockliffe is in the market for a wife. His requirements are simple; a lady who will occupy her position with well-bred grace and chaperone his sister, Nell – but who will not bore him to distraction. He is acquainted with a number of ladies who could fulfil the first two but none who can achieve the last.

Then, whilst accompanying his sister to what he speedily comes to regard as the house-party from hell, he meets Adeline Kendrick – acid-tongued, no more than passably good-looking yet somehow alluring; a combination that Rockliffe finds infuriatingly provocative. Worse still, her relatives are quite deplorable – from Cousin Diana, a spoiled and ill-natured beauty, to manipulative and devious Uncle Richard. As a prospective bride, therefore, Adeline is out of the question. Until, that is, a bizarre turn of events cause the Duke to change his mind and make what his world will call a mésalliance.

Once back in London, Nell, plays fast and loose with the affections of Harry Caversham, Rockliffe – whilst attempting to woo his elusive bride – begins to scent a mystery and Adeline finds herself confronting a family skeleton which emerges, without warning, from the closet. Intent on averting a scandal and unwilling to burden her husband with the secret, complications and misunderstandings inevitably ensue.

But his Grace of Rockliffe is neither a fool nor a man to be easily defeated and his stylish Duchess, no milk-and-water maid. How all their difficulties are resolved and the mésalliance proved to be no such thing, is told in this lively sister-novel to The Parfit Knight.

Add my voice to those wishing you wrote faster yet also willing to wait for each new book with breathless anticipation. Lucky for me the follow-up for this one, “The Player,” is already out. It’s rare that I find authors with whom I “click” so easily but a delight when it happens. His Grace the Duke of Rockliffe played a secondary, yet important, role in “The Parfit Knight” and I was looking forward to seeing him in action again but the man was going to need a strong woman to match him. I think he found her in Adeline.

Rock and Adeline are both strong people yet have vulnerabilities. Adeline’s are somewhat more on view but it would be a mistake to think Rock hasn’t his weak spots nor that he is the totally unflappable man he presents to the world. Their first meeting was slightly memorable, each recalled the other, but it was not the unforgettable cliché of so many novels. Indeed, the two found themselves a touch disappointed during the initial encounter at the “house party from hell.” Adeline had grown a protective shell and defended herself with a sharp, bitter tongue as she had become that mistreated, despised and pitiable creature The Poor Relation. Rock had inherited his title with its due consequence adding to his cool and controlled façade. He also powdered his hair, something Adeline found sad given her memory of its dark beauty and how she felt this disguised him.

Each finds the other changed, yet still hints poke out from behind their walls of who they each used to be and, perhaps, still are under the weight of the intervening years. They also have things in common besides intelligence and wry humor with neither being one to suffer fools – though Rock has been able to express this more openly while Adeline needs-must hide this under thinly veiled mockery.

So each has hidden their true self. While the outside world might think to know them and take pleasure in discussing, gossiping about and speculating on them and the nature of their marriage, will Rock and Adeline be able to let down their guard and fully trust a person who though a spouse, in many ways is still a stranger and unused to opening up? And even if they can, what will happen when the dark secret conflict rears its ugly head?

Adeline is not a martyr nor is she willing to sit and take what her relatives dish out. She has learned, the hard way, to control herself and frankly I couldn’t blame her for taking verbal slings at the family who have tried, physically at times, to cow her. For all that, she doesn’t come across as waspish or a shrew, merely as a young woman protecting herself as best she can amidst a life of painful drudgery for which she sees no end. Indeed when she is at last brought to accept Rock’s proposal, she tells him plainly that getting away from this is the most tempting part of the bargain.

Rockliffe is a Duke in the days when this actually meant something. As the head of his powerful family, he is well aware of the social gulf he is bridging in offering for this well bred but unknown woman of no consequence, rank, looks or fortune. In a perverse way I was delighted to notice little instances of how a shocked society views this marriage between unequals. But in her he’s found one whom he never thought to locate – a woman he finds attractive, intelligent, who he thinks won’t bore him silly and whom he physically desires. His explanation of these reasons to Adeline are as matter-of-fact and honest as hers were to him. Not exactly a match made in heaven but at least they’re up front and everyone knows where they stand.

But soon cracks in their façade begin to show even if only to themselves and those who know them best. Rock also discovers to his chagrin that even with all his influence and power, he might be able to direct and channel society in the direction he wishes it to go but winning his wife’s love is another thing altogether. Finesse will be required as he finds himself wooing a woman for the first time in a long time. Adeline quickly develops a fierce loyalty to him and determination to shield her new family from any insults due to her lesser social background. Something that of course turns out to be disastrous.

This is a sequel to The Parfit Knight but I think it stands alone. Other previous characters besides Rockliffe are introduced succinctly with enough information to explain their place yet none overwhelm the story.

Despite having reasons for easing into trusting each other (Rock has never been in love before nor even tempted to say those words to any woman and Adeline has lived with her cold, snubbing family long enough to put up thick barriers), there were so many times I just wanted to shake both of them. So many near misses when either one could have broken the ice, spilled the beans, asked for help, bridged the gap, etc… Instead each clings to secrets like barnacles, letting the issues fester until their marriage was almost nothing but overly cordial strangers living in icy silence and poisoning relationships with friends. Shake, shake, shake!

The final showdown was like fireworks on Guy Fawkes day. I mean, wow. It’s really going to take a fabulous new scandal to move into first place in London ton gossip. But I do have to hand it to Tracy – with his real self unpowdered hair – for a declaration of love which I won’t forget for a long time.

And, when the lucent, dark-fringed eyes locked with
his, he said, ‘I once told Rosalind I was looking for a duchess. It
wasn’t true. What I wanted was a wife who would occupy every corner
of my heart and set my blood on fire; a woman I could make the very
core of my being and who I hoped might feel the same about me. When
you and I married, very little of that existed between us and yet I
had an unreasoning instinct that, one day, it would. This, finally,
is that day. I love you and want you more than I dreamed was
possible … and nothing will ever hurt you again while I have breath
in my body.’ He paused, the dark eyes still looking deep into hers.
‘And now it’s your turn to believe. Do you?’

I also enjoyed watching two of the characters from “Knight” find their ladies – though best of luck to Harry. He’ll need it. And my question about who gets Broody is answered. But did Robert Dacre have to be sent to America? Banastre Tarleton wasn’t enough? B+