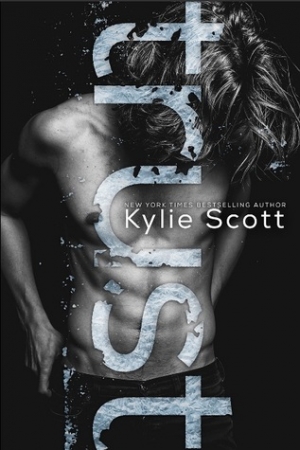 Trust represents your first foray into self-publishing. It fits somewhere in the YA/New Adult romance subgenre, with both protagonists in their senior year of high school. The cover suggests to readers that there is sex contained in the book – and there is – but neither does Trust have as much heat as your other books. Maybe it’s mature YA?

Like your Stage Dive and Dive Bar books, the story is told entirely from the first person perspective of the heroine; in this case, Edie Millen, a 17 year old senior at a fancy private high school. One night, Edie and her BFF, Georgia, do a snack run and Edie, as the (slightly) more presentably dressed of the pair, goes into a gas station/convenience store known as the Drop Stop to stock up on Doritos and other essential binge-watching items. Unfortunately, while she is in there, a meth-head named Chris also enters and attempts to rob the store. The robbery goes badly and Edie and two other customers also present are taken hostage. One of the other customers is John Cole. John, via his older brother, Dillon, knows Chris somewhat. John attempts to engage Chris in conversation in an attempt to calm the situation. Ultimately, things get worse before they get better. When Edie’s life is at serious risk, John takes decisive action.

At the start of the book, John and Edie are polar opposites. John is a bad boy. He’s the dealer all the high school kids come to for weed, having inherited the role from Dillon, who has now moved on to selling more hard core drugs. He doesn’t do very well in school and has a bit of a reputation with the ladies (as in he’s a hit ’em and quit ’em type). Edie is a “good girl”. She studies hard, doesn’t drink, doesn’t do drugs and is a virgin. However when their worlds collide, John and Edie suddenly have a bond perhaps no-one else can understand.

After the robbery, Edie finds herself with far fewer fucks to give than ever before. Her entire worldview has been shaken. She struggles in school, stands up to a bully and gets suspended. Then she transfers to a public school, against her mother’s wishes. It’s the same school John goes to as it happens.

For John the robbery produced almost the opposite reaction. He saw a glimpse of what he could become if he doesn’t straighten up and fly right. So he’s stopped selling weed and moved in with his uncle. He’s studying and trying to graduate high school with a high enough grade to go to college. He has plans for a future and that future doesn’t include jail or drug addiction.

At the new school, Edie makes a new friend in Hang, and also has a wider circle with Hang’s other friends, Carrie and Sophia, who are dating each other. I loved the dynamic between the girls. I loved the friendship between Hang and Edie, I loved the broader representation in Trust, both ethnically and from a queer perspective. I loved that these characters were presented as welcome and belonging.

“John who?” I slid a bookmark in to flag where I’d been up to, because only an ignorant, soulless monster doomed to burn in hell for all eternity would dog-ear a page.
“Don’t even try,” Hang groaned. “You nearly fell off your chair when he walked in. Which is a totally fine response to his manly beauty, no shame in it at all.”
“My chair was wonky,” I said, surprised to find myself smiling and genuinely enjoying myself. “I’ve broken chairs before. There’s a lot of joy weighing me down.”
Carrie laughed, taking another bite of apple. “Bullshit,” she said. “Hang said he looked at you.”
“You’re probably mistaken,” said Sophia. “Don’t look at me like that. I’m not kicking puppies or being mean. None of us are cool or hot enough to get his attention.”
“Or vapid enough,” said Carrie.
“Or easy enough,” threw in Sophia.
“Speak for yourself,” said Hang. “I’d be easy for that.”
“There’s nothing wrong with liking sex,” said Carrie. “Don’t slut-shame.”

I also loved that Edie is fat. It’s not just Edie’s perception either. She is often teased about it. (I use the term – as Edie does – as a descriptor only.) What her weight is is not specified exactly but it was clear to me that Edie isn’t the big-girl-who’s-really-not-that-big who seems relatively common in romance. What I loved the most? Edie doesn’t get a makeover. And John clearly loves her and her body just the way she is. She’s a fat teenaged heroine who has friends, a hot boyfriend, affection and love and that was awesome. There was no part of the story about her dieting or changing her body for John. Sure she was embarrassed at first to show him her body but her confidence built as the story progressed and really, the kick start to that was the robbery making her realise that what petty pathetic people think of her is really not important. From a representation point of view, this one ticked a lot of boxes in gold pen.

John’s best friend (pretty much the only friend who stuck with him after he stopped dealing) is Anders. Anders is very much like Mal from the Stage Dive series – and as much as I love Mal (and I really do), it is perhaps a titch more acceptable from a teenager than a grown man. He also reminded me a bit of Blake from Sarina Bowen’s & Elle Kennedy’s Us and Good Boy. In other words, Anders is great. He’s larger than life, loyal to the bone, smarter than he lets on and hilarious. The lighter moments in the story came from Anders and I adored him.

Both Edie and John are traumatised by the events at the Drop Stop and it draws them together. John and Edie talk, a little, about how they’re feeling and John urges Edie to open up to her therapist rather than just fobbing him off as she had been doing. Unsurprisingly, when she does start talking to the therapist, it helps. John doesn’t have the luxury of counseling. I suppose this reflects the inequities in the US health system.

John encourages Edie to apply herself in school and stop getting into trouble. They start studying together. Edie helps John with English homework. John helps her with maths.

“Stop delaying. Come on, you explain this Poe guy to me and I’ll help you with your math issues.”
“Deal.”
“And hey, Edie?”
I got busy rifling through the contents of my schoolbag. “Hmm?”
“You’re cute when you’re pissed off.”
My head snapped around like the chick from The Exorcist, but he was reading his textbook, not even looking at me. Weird. “Thanks. But I prefer the word fierce.”

Edie has a kind of bucket list now and she’s pretty desperate to tick those items off; life is short right? John helps her out with a few of those items as well, as it happens.

I loved how Edie came into her own. She stood up for herself and valued herself and that was so great to read. She doesn’t go to John as a supplicant but as an equal and she demands he treat her with the respect she deserves. (It has to be said that he almost always does without having to be reminded but it was good to know she would stand up for herself with him should it be necessary.)

“Want to tell me why you’ve been avoiding me, Edie?”
“I haven—”
“Don’t!”
I stopped. The tone of his voice didn’t encourage debate. And yet. “John, I get that you’re upset. But if you raise your voice at me again I’ll push you out the fucking window. Understood?”

John is not the world’s most expressive man. He doesn’t talk about his feelings often. But his actions speak for him. He doesn’t tell Edie she is pretty all the time but it is plain for all to see that he thinks the sun rises and sets by her. I wouldn’t have complained about a little more in the pretty words department from John but I do tend to believe what someone does over what they say and I definitely believed John.

I did think the book stuttered a little at the end, which felt a little rushed and info-dumpy. That said, Trust hit so many high notes that I have no hesitation in recommending it.

→ Kaetrin
Previous article: DAILY DEALS: A couple of must download freebies and two others
Next Post: REVIEW: Illuminating Women in the Medieval World by Christine Sciacca