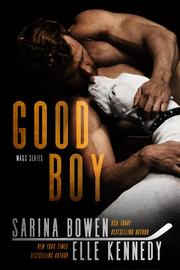 Us nearly made my top 10 list last year – it was an extremely close call. And as much as I love Jamie and Wes, Blake Riley kind of stole that show for me. He was a goofy doofus with a heart of gold – I imagine him looking like Chris Pratt circa Guardians of the Galaxy but slightly closer to the character of Chris Pratt circa Parks and Recreation.

Blake was onto me, though. And that dude is a lot like a big, drooly dog. Doesn’t matter if he just met you, he wants to lick your face and hump your leg.

Astute readers will know that something steamy went on between Blake and Jamie’s sister Jess when they were supposed to be looking after a sick Jamie. Good Boy picks up four months or so after the end of Us, at Jamie’s and Wes’s wedding in California. Jess has done all the planning but in doing so has realised that yet another career she aspired to is not right for her. She’s embarrassed at being the family screw-up and worried that no-one will ever take her seriously.

She has however finally identified her true career passion: nursing. At 26, Jess is going back to college. It turns out nursing school is cheaper in Canada and before she knows it she’s living in a dorm in Toronto and freaking out about passing her classes.  Blake and Jess ‘accidentally’ hooked up at the wedding but Jess is not planning on any more repeats. Not surprisingly, that plan isn’t what one would call successful.

At first Blake is the cheery, friendly doofus readers knew and loved. Being the hero of his own book however, we need to know more about him. In some ways it felt a little like a personality transplant. That’s not really fair though. It stands to reason that getting to know Blake a lot better, to understand what makes him tick, would reveal a depth of character not previously seen. It makes him more than a doofus but the corollary is that as he becomes a deeper character, he also becomes less pratfall funny. It’s a trade-off I was willing to make however.

Some readers won’t enjoy the trope employed in this book. Evil ex-girlfriend often draws complaints – sometimes I am even one of the folks complaining. I admit evil ex isn’t my favourite trope, however, I think that representation here was balanced out somewhat by the other positive representations of women in the book – Blake’s sisters, his mother, Jess’s sister and mother and the other WAGS who, to my applause and delight, were all wonderful. There was not a bimbo in sight. Also, there was some effort made to understand why the evil ex did a bad thing (although what she did afterwards makes far less sense to me and it wasn’t really something the story explored).

Anyhoo, Blake asks Jess to be his fake girlfriend at his sister’s baby shower – where his ex-girlfriend will be because she is also his sister’s BFF.

“Mom is over the moon. She’s bought out the baby store already, so my sister is gonna end up with four of everything. I mean, what does a baby really need? A bed and a hockey stick. The end.”

One thing leads to another and the fake thing gets extended and then morphs into something real of course.  What’s different about this book is that there isn’t a big black moment where things look dire for the HEA. The arc is much more a gentle slope towards the happy ending rather than a particularly bumpy ride. I both liked it and didn’t. I’m so used to the black moment that I was waiting for the other shoe to drop and when it didn’t and the book just ended I was a bit nonplussed. So I’m doing readers a favour here – there is no other shoe, just relax and enjoy it.

While Blake reveals himself and becomes more than a funny sidekick, he’s not unfunny either. There wasn’t quite as much silly Blake humour in the back end of the book as at the beginning but it wasn’t entirely absent. He still cracks me up.

Blake called it our reunited and it feels so sexy sexy-times. I pointed out that the back-to-back use of the word sexy was kind of redundant, at which point he said I was redundant and proceeded to fuck me again. Which leads me to believe he doesn’t know what redundant means.

Blake, like so many of the heroes I love best, goes all in when he decides Jess is the one. Honestly one of the most attractive traits in a hero is how much he adores the heroine.

“I can’t remember my name,” I mumble.

Her dry voice tickles my neck. “Really? Because I think I just shouted it, oh, about a hundred times?”

Not all of the humour was from Blake or at his expense. Jess’s friend Dyson, who provides her with useful man-advice, has his moments too.

“Dyson, if it’s fair to criticize the things we did in the seventh grade, I’m going to have to call you out on that awful polyester blazer with the satin lapels.” There’s a puff of outrage in my ear. “I was wearing it ironically.”

The story also covers Jess’s first trimester or so of nursing school and her ups and downs in pursuing a new career. The “I’m the family screw-up” wasn’t deeply explored. By the end of the book, Jess was more confident but there was a whole level of how she is perceived in her family which was completely undeveloped. There were some other things which were dropped in but which didn’t really go anywhere; the disparity between Jess’s income (ie none) and Blake’s, the thing about the grand gesture.

I enjoyed Good Boy very much but when I reflected on it afterwards to write this review, there were some missed opportunities. It’s very much a feel-good book (nothing wrong with that at all) but those things left dangling and unexamined did bother me a little.