REVIEW: Illuminating Women in the Medieval World by Christine Sciacca

When one thinks of women in the Middle Ages, the images that often come to mind are those of damsels in distress, mystics in convents, female laborers in the field, and even women of ill repute. In reality, however, medieval conceptions of womanhood were multifaceted, and women’s roles were varied and nuanced. Female stereotypes existed in the medieval world, but so too did women of power and influence. The pages of illuminated manuscripts reveal to us the many facets of medieval womanhood and slices of medieval life—from preoccupations with biblical heroines and saints to courtship, childbirth, and motherhood. While men dominated artistic production, this volume demonstrates the ways in which female artists, authors, and patrons were instrumental in the creation of illuminated manuscripts.

Featuring over one hundred illuminations depicting medieval women from England to Ethiopia, this book provides a lively and accessible introduction to the lives of women in the medieval world.

Romance books used to be full of medieval stories. I cut my teeth on the famous – or infamous depending on your POV – “The Wolf and the Dove” by Kathleen Woodiwiss. When I saw this beautiful cover, I immediately clicked to discover more of what this book is about. In addition to seeing what medieval women looked like, the illustrations also show what they routinely did and how they lived. The books and manuscripts from which the figures are taken give definitive clues as to their influence on not only women but also men of the day. The fact that some were not only commissioned by women but also made by women and owned by women – no mean feat when books were extraordinarily expensive – give more evidence of the financial and influential positions some women managed to achieve. 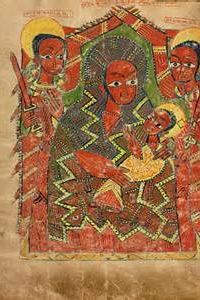 Since the Church was so important in medieval life, it’s not surprising that most of the illustrations are taken from European Christian devotional books but I was delighted that there is one image from the Ethiopian Orthodox Church and several from Haggadahs, a Siddur and a Torah. In addition there is an illustration from a famous twelfth century story by Nizami about the romance between Iranian king Khusrau and Armenian princess Shirin.

The images weren’t all positive. “Come hither” Bathshebas frequently appear as more responsible for David’s actions than his own weakness and of course Eve is the mother of all sin. Gomer and Mary Magdalene were women who could be redeemed of their sin. The wiliness and feared sexuality of women is seen in illustrations from “The Romance of the Rose.” On the positive side, Courtly Love, courtship and approved marriage show what women should aspire to as it lead to the cementing of political and economic alliances as well as the children needed to carry on the family.

Women’s economic roles are shown in images of them with bread loaves and distaffs. Figures of women patrons being presented to the Virgin point to them as commissioning the books. The name of one Parisian illustrator – Jeanne de Montbaston – and her works – done along with her husband – have survived. Meanwhile images of Christine de Pizan – one of the first known European female authors – and Hildegard of Bingen as well as their writing were recorded. One of the most charming pictures shows a group of villagers on their way to Church with their children for a Candlemass celebration.

This is a beautiful book packed with gorgeously reproduced images that shows a bit more about how women truly lived, worked and were viewed in their own time. Men might have dominated most aspects of life but here are women, taking their place in society and proving their worth and importance. A-

Want to see more? Check out the link to the exhibit at the J. Paul Getty Museum