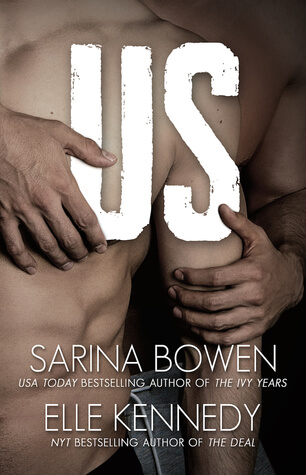 I loved Him. In fact, it made my favourites list for 2015. So I admit I was a little dubious when I heard there would be a follow up book, Us. Because what if it wasn’t as good? What if it was pretty much the same story? What if, if I didn’t like Us, it soured my memories of Him? None of that is a reflection on what I think of your writing skills. This is a thing I think about any story where there is an unexpected follow up. I thought it about The Rosie Project and The Rosie Effect. And in fact, I decided not to read The Rosie Effect for that very reason (and some of the reviews I read indicated that was a good decision.) So I left Don and Rosie just where I wanted them and nothing messed with the HEA.

But what if Us was as good as Him? What if it was all the things I liked about Him but a different story and also wonderful? And this is where reader trust comes in. Because I trusted you ladies enough to read it. Another good decision, as it happens.

I’m happy to report that Us is not Him revisited. It’s a different story and I liked it just as much as the first one and for much the same reasons but not because it was a repeat of the first story. These characters have grown and changed and Us is about the next chapter in their lives.

(There are some similarities in plot to The Understatement of the Year but it didn’t bother me; they were different characters in a different universe, but I suppose it could be an issue for some readers.)

Ryan “Wes” Wesley and Jamie Canning have been living together since the end of Him. When we left the pair, they agreed that Wes would come out at the end of his rookie season. He wanted the focus to be on his hockey skills and not on being the first out gay NHL player. He also wanted a chance to cement himself with the team so they’d know him as a person before coming out to them.  Jamie agrees but after six months, it’s hard going. Both hate lying to their associates but more than that, it has interfered with each man’s ability to make friends with the other players and, in Jamie’s case, with the other assistant coaches. It’s easier to keep themselves apart to limit the lying but it also means that Jamie and Wes are all the other has in Toronto and that’s a lot of pressure.  Added to that, Jamie is often alone in Toronto because Wes travels a lot for away games.

I will admit the beginning of Us didn’t exactly grab me by the throat. It took me a little while to get into (but only a little while). Wes is having an amazing rookie season. The team is a chance for the playoffs even. Jamie isn’t celebrating the same level of success with the junior majors team he helps coach. They’re a very talented bunch of kids but something isn’t gelling. Jamie is working with another assistant coach, David Danton, who is a homophobic bigot. Jamie isn’t all that concerned for himself, but he is worried about the effect these slurs will have on the players and on how important it is for a coach to model good behaviours.

Blake Riley, a D-man teammate of Wes’s, has just rented a condo in the same building as Jamie and Wes. And suddenly, “home” is not necessarily the safe space where they can be themselves with no filters, because Blake is over all the damn time. He’s the kind of guy who just barges in. And speaking of no filters – Blake has none. He lives large. He’s also loyal and funny and kind but these things seem less important when he’s busy cramping Wes’s and Jamie’s style. Wes is freaking out in case Blake guesses he and Jamie are more than roomies. And, Jamie is even more frustrated than before because he’s getting less time with Wes than ever. There is so much attention on Wes and how brilliant a season he’s having, Jamie is beginning to wonder if Wes will stick to the agreement about coming out at the end of the season. Maybe he’ll change his mind and want to put it off for longer? Jamie doesn’t think he can handle that.

Both Wes and Jamie spend a little too much time in their own heads in this section and not enough actually communicating. While it was a little frustrating, it also felt authentic and understandable. However, when

Jamie gets ill and is rushed to hospital, Wes is unable to hide how he feels and the truth comes out.
And this is where the story did grab me by the throat. Thereafter I had all the feels and I was completely on board. And this happened not very far into the story at all.

I have to say I loved Blake’s character. He’s larger than life, hyperactive and a clueless when it comes to social cues. He’s the kind of guy who terrifies introverts like me because he’s loud and brash and always wanting to do stuff and be social. But he’s also the guy you can always count on. He’s 100% loyal.  In some ways he reminded me a little of myself (but only a little because he is completely extrovert and I’m really really not) – it’s because of those social cues. I’ve felt that embarrassment and hurt when someone is just putting up with you and really really wants you to shut up. So I found him relateable as well as all the other things.  And he delivered to me the biggest laugh out loud moment of the book. It was just so classic Blake and completely funny because it was him.

Blake was sometimes in danger of taking over the story actually. (I really hope he gets a book of his own. *hint hint*)

I liked that you didn’t go the obvious route with Us. The conflict didn’t go where it could have; it was more about Jamie’s social isolation and him dealing with the after effects of illness. While both men, at various times throughout the story, are scared their relationship is tanking, there was never a serious threat to their HEA. The story demonstrated how damaging it can be to hide who you are and showed some of the flow on effects of that.

While there was some miscommunication (and absence of communication), I was confident that they’d sorted through their bump in the road by the book’s end. One of the things I enjoyed about Him was Jamie’s and Wes’s ability to talk to one another. There were reasons (as opposed to excuses) that they went through a period where they weren’t really talking effectively with each other and those reasons made sense to me. Also, I think that experience only reinforced how important it is to keep the lines of communication open. Plus, now that they’re both out, much of those reasons have disappeared anyway.

The ending was a little cheesy but I didn’t care. It’s clear Jamie and Wes belong together and I’m all about the HEA after all. As much as I adored Blake, there was plenty of Jamie and Wes to enjoy and I liked the chance to explore their HEA a little further.