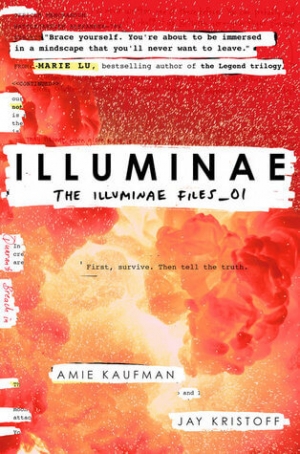 This morning, Kady thought breaking up with Ezra was the hardest thing she’d have to do. This afternoon, her planet was invaded.

I saw this book mentioned in the discussions at the “File 770” blog, where I lurk on a pretty regular basis, and I should probably stop going there because my wallet is not thanking me, but I cannot find the strength. I loved this book, but readers need to beware of several things which could stop them from enjoying it.

First and foremost, as the blurb tells you, the story is not written in a standard narrative style. It is mostly a linear narrative, but it is also an epistolary novel. and more. We have emails, diary entries, and descriptions of the security footage on the space ships where the action takes place. We also have diagrams of the ships in the story, pictures of the civilian casualties, and communications from one of the ship’s AI, which look very weird, but I guess it works as computer communication. There are also some blank pages. I could have done without them, but I get what they were supposed to reflect in the story, so consider them a visual aid, I guess? There are also some pages with very few words on the page – same thing. Those pages with no or very few words are not many amongst an almost 600 page book. But if this style is something you know you cannot enjoy, I cannot state it strongly enough – skip the book.

If my initial description is not something which will scare you away on its own, keep reading and see if the rest of the review helps you make a decision ?.

The blurb gives you the setup, but I am going to elaborate on it just a tiny bit. Basically, one of the corporations has decided that it would be a good idea to put the illegal settlement of regular people on a tiny planet called Kerenza so they can do mining work there. They have been working, studying, and living their lives, until one day the ships of the BeiTec Corporation appear near their planet and attack them, killing tons of people and destroying their ships (sadly this was only the beginning of the horrors they inflicted). Just because they’re illegal? Let’s bomb them all, instead of going to whatever Judicial Body that governs this federation of planets (is it called Federation? I don’t think so, but it is certainly something that governs the planets in this system) and making sure that the corporation that started this illegal settlement gets fined a lot?

One of the entries in this ‘Illuminae files” which provides some backstory is the entry from “Unipedia” ?. So let me quote from it:

Sadly, the battle did not go well for the Alexander, and at least some of the Kerenza ships had many civilians on board. They now were incapable of jump travel, which meant that assistance would be months away, and obviously their employer was not too eager to report an illegal settlement to the authorities. Oh, and there was a nuclear confrontation involved too, and the Bei Tech ship fired at Alexander and completely destroyed another civilian ship with thousands of refugees on Board.

Two Kerenza ships, the Copernicus and the Hypatia, escaped after that battle and the Alexander eventually escaped as well. But they are pretty sure BeiTech ship Lincoln will catch up to them soon and attack them again.

I think this is all you need to know about the setup. Remember how I described the way this book was written? I was actually very surprised when I started to read it, because irregular narrative or not, the story moves at a very fast speed pretty much *all the time*. Usually when I read epistolary novels, even with the best of them I feel a bit distanced from the events in question. Not so here – we do get a chance to catch a breath here and there, but mostly it is a very fast moving action.

The ships, both civilian and military, are trying to deal with the situation to the best of their abilities and it feels like the situation is getting worse and worse, not better. The death count in this story is extremely high –  not gratuitous at all, and I would not say that the violence is very graphic, but the authors do not shy away from what war is all about.

I thought the book combined a love story with fast-paced science fiction very well. Kady and Ezra are wonderful characters – after their escape from Kerenza they end up on different ships, and Ezra is conscripted in the army as are many other civilians, per the directions of “Alexander” command, and they really did need help a lot. However, that means that they can only communicate by email and yes, a lot of their emails are written in a slang form, but I had no trouble understanding them, and *not* everything in the story is written like that. I had the misfortune to glance at a couple of reviews, and one of them suggested that unless you look at your phone all day, or live in your phone, skip the story. I do not agree at all – there are plenty of documents written in very nice English ?.

Kady is brilliant, which could have make me roll my eyes a lot, because she obviously plays an important role in turning the situation for the better. I mean, she and Ezra are seventeen when the story begins and I guess they are both eighteen when the first book ends, so I get that her IQ is 147, but everything that she did? All of that? But I think story pulled it off, because we saw so much of Kady’s uncertainty and fears and despair – she did not come off as a caricature to me at all, I ended up loving her. I liked Ezra too, but his actions did not raise this issue for me.

Read this book, it is awesome. I just hope the second book will be as good.