After reading your novella in The Brightest Day, I knew I wanted to read more of your work. The cover of book three in your Migrations of the Heart series, A Treasure of Gold, caught my attention and I decided to start there. 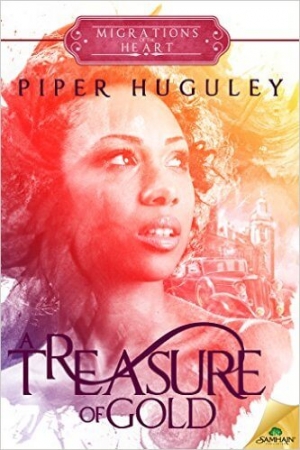 Like its predecessors in the series, A Treasure of Gold is set during the Great Migration, the movement of African Americans from the Southern United States to other parts of the country between 1910 and 1970.

More specifically, the story takes place in 1923 Pittsburgh, and begins with Nettie Bledsoe’s discovery of an injured man in an alley.

Nettie is a recent arrival in Pittsburgh, having moved there from Winslow, Georgia only two weeks earlier. Nettie is walking to Freedom Christian Church, where she volunteers in the charity kitchen, when she hears the injured man’s groan.

Although she has been warned by her sister Ruby not to stop for any reason, Nettie stops to help the man. He tells her he has been shot and she helps him reach the home of Ruby and her husband, Adam, since the latter is also the nearest doctor.

Adam identifies the injured man as Jay Evans, the man who runs the local numbers game. Adam fears that lending his assistance to a criminal could be dangerous to his family, but Nettie insists that he aid Jay, so Adam treats Jay’s wound. In the process, Jay explains that his young daughter will be worried by his absence.

The sight of Nettie distresses Jay. He recognizes her as the woman who participated in the traveling revival circuit that came to Freedom Christian Church two years earlier. At that time, Jay’s wife Clara was ill, and he blames Nettie, who prayed over Clara and offered what he sees as false hope, for Clara’s death that same night.

Nettie has for years had a feeling of special connection to God, and she’s certain it is God who guided her to the injured Jay. She hears an inner voice command her to go to Jay’s daughter, and she does.

The little girl, Goldie, opens the door and greets Nettie by asking if there’s a number she wants Goldie to take down for her father’s policy game. Nettie is further shocked to find Goldie’s babysitter, Eva, passed out on the couch and smelling of cigarettes and alcohol. She fires Eva and takes Goldie to Jay, then helps them get back home.

While Jay sleeps, Nettie and Goldie clean the house and make a nourishing soup Jay savors later. When Nettie returns home, Adam sternly warns her to be careful of her reputation. But the next day Jay and Goldie show up at the charity kitchen, and Jay insists that since Nettie fired Eva, she must temporarily watch over Goldie until a replacement can be found.

Nettie takes the position, but as time passes and her sisters keep insisting that she quit, she becomes less sure that working for Jay is the right choice. Is the position a calling from God to care for Goldie and her father, or is her growing attraction to Jay clouding her judgement?

Even if Jay can realize Nettie did not wrong Clara on the day of the latter’s death, there are still other obstacles between them. One of the biggest is that Jay resists going to church, while Nettie is devoted to her faith.

Then there is Jay’s life of crime, which is hardly compatible with Nettie’s beliefs, or her need to maintain a good reputation, especially given the snobbery of some members of Freedom Christian and her family’s resulting determination to keep Nettie away from Jay.

There is also Jay’s belief that he isn’t good enough for Nettie – and Nettie’s corresponding belief that Jay would never want her, since she is infertile due to a childhood illness. Can Jay convince Nettie that whether or not she can bear children, she deserves to be treasured?

I enjoyed this novel on several levels. First, the characters were interesting people who quickly became real to me. Jay could have been a banker, but for the color of his skin. Because black people were barred from using white banks, much less working in them, and there were no black banks nearby, Jay used his policy game to raise money for his own needs and occasionally for the needs of others in the community too. He also knew how to charm Nettie when he wanted to, and he saw her worth even when she did not.

Nettie was a strong minded heroine with a soft spot for Jay and his daughter, and she followed her sense of purpose despite her family’s interference. She contributed to her community in multiple ways even when people judged her for the time she’d spent with Jay. I was especially moved by Nettie’s fears (stoked by her family members’ assertions) that no one would ever want her for a wife because she was infertile. It was clear she had so much to offer and that Jay at least appreciated that.

Second, the conflicts I mentioned above also made for a touching love story with a theme that had a hint of star-crossed love. Although Nettie’s sisters Ruby and Mags, as well as their husbands, refused to see that any good could come from Nettie’s relationship with Jay, Nettie and Jay’s hearts could not give up. Despite all their own doubts, some part of Nettie and of Jay knew they were meant to be together, and eventually that love won out.

Third, I was moved by the bond between Nettie and Goldie. The child responded to Nettie’s care like a flower to sunlight, and I also loved the little girl’s personality (for example, the way Goldie tells Nettie she could teach her how to dress).

And fourth, I really loved the evocation of this time and place. I don’t believe I’ve ever read a romance set among 1920s Pittsburgh’s African American community, so the setting here felt very fresh. It also came alive, from the church with its charity kitchen and the school classes Nettie begins to teach, to the policy bank where Jay worked.

There is a great scene in which Jay takes Nettie to meet a couple who are friends of his. It turns out that this couple is white. Nettie’s hand trembles when she shakes hands with Erma, the wife, because she’s never shaken hands with a white person before. This scene brought home the level of injustice African Americans faced in the 1920s.

Because I’m not a Christian, I had to adjust my thinking when Nettie’s connection to God was first mentioned. I decided to look at the voice Nettie sometimes heard simply as her inner voice, rather than as something that came from above or outside her, and that worked for me.

I also had a couple of points of confusion. One was that it was stated that Jay used his policy game to help people who needed money, but it was also stated that he and his men wrote down the numbers people bet on, and that he got the winning number from a bank. I’m confused about how both these things could be possible at the same time, so I wish the method by which he helped people when they were in need had been explained better.

The other thing that confused me was Nettie’s childhood illness. It was described as a mysterious, undiagnosed illness yet everyone was dead certain that it left Nettie unable to bear children. Since Nettie had never been married or in a sexual relationship, I didn’t understand how her family (which included a doctor) could be so certain of that.

The book contained a few copyediting errors too. While I wish that these had been caught, I found the novel moving, romantic and worthwhile. This is one treasure I hope more readers discover. B/B+.