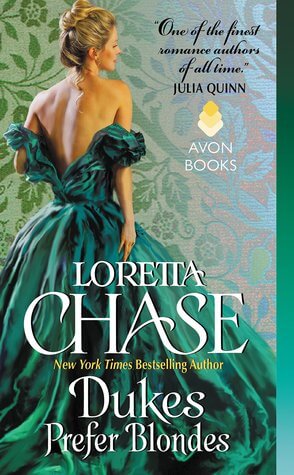 I requested this book on a whim though I haven’t read all of the previous books in the series (I think I read the first one?). I don’t think that fact affected my enjoyment *that* much, but it’s fair to say that I wasn’t blown away by Dukes Prefer Blondes.

Lady Clara Fairfax and Oliver “Raven” Radford first meet as children, when she chips a tooth trying to protect him from his bullying cousin Bernard. They meet again years later when he briefly saves her on the streets from being run down by a carriage, and then again shortly afterward when she comes to him for help. Radford is a barrister with a reputation for fighting on behalf of lost causes. Clara is involved in a charity through which she’s gotten to know a young woman whose younger brother has fallen in with a vicious street gang. She wants Radford’s help getting him out. Radford is also notoriously irascible and quickly tells Lady Clara that she’s on the wrong side of a lost cause. At the same time, he’s taken with her almost legendary beauty, beauty marred only by the chipped tooth by which he finally recognizes her as his long-ago defender. It’s only at the end of this encounter that Raven realizes that Clara remembers him, too.

Raven at first declines to help Clara, but finds himself drawn into doing so anyway. From the first, he’s attracted not just to her stunning looks but to her mind; most people can’t keep up with Radford’s intelligence and wit, but Clara gives him a run for his money.

(He frequently comments at the unlikeliness of a mere woman doing so; it’s mostly to get Clara’s goat that he keeps saying it, but I still didn’t find it that cute. It may have been accurate to the period, but I don’t find casual sexism from heroes that much more acceptable than I would casual racism. I don’t expect or necessarily want them to spout anachronistic attitudes, but I don’t need to have their prejudices either shoved in my face or played for laughs, either.)

From there the plot is pretty much a series of slightly unlikely set-ups to ensure that Raven and Clara spend a lot more time alone together than an unmarried man and woman generally would have in their society. First they’re meeting secretly to arrange for the rescue of the boy that Clara wants to help (a lady such as Clara can’t be seen to be visiting a barrister, of all things); later she falls ill and it falls to Raven to nurse her, for reasons. (To be fair in the context of the story it made sense – sort of – but still felt like kind of an obvious deus ex machina.)

There were a number of aspects of Dukes Prefer Blondes that felt familiar, and not in a good way. Why is it that in SO many historical romances the “good” characters know about germs (even if they don’t call them that) and the inefficacy of blood-letting, whereas everyone else (including trained and respected doctors) are quacks/idiots/unethical? I’m not sure how this got to be a litmus test for virtue in romance characters, but both Raven and Clara seem to know much more than everyone around them about modern medical practices. I found this irritating, perhaps because I’ve read that scenario so often.

There’s also a lot of mental lusting in the book; I’ve developed a fair aversion to mental lusting. Raven slobbering over Clara in her nightgown when she’s seriously ill was unnecessary. I get it; she’s hot, and he’s really attracted to her. But I would expect someone as cerebral and upright as Raven to know that there’s a time and a place for everything, and that wasn’t it.

Also, while I know it’s a common characteristic in Loretta Chase romances, Clara and Raven’s verbal sparring got tiresome after a while.

To be fair, there were aspects of Dukes Prefer Blondes that did work better for me. I liked Clara’s quiet bitterness over the constraints of the life she led, and Raven’s recognition that she deserved to be seen as more than an ornament; that she should be LISTENED to and paid attention to. Raven’s complicated feelings about his cousin Bernard showed hints of his depth and gave him some nuance as a character.

I also liked that part of the conflict between Clara and Radford centered on the fact that he was a mere mister, and she was raised to marry a duke. The resolution to that was disappointingly predictable, though. Overall, the book and the characters were pretty flat for me. The fact that this review is probably about 2/3 the length of one of my normal reviews is a reflection of the fact that I just don’t have a lot to say about the story.

I have the feeling that Dukes Prefer Blondes is one of those historicals that will work better for someone who is not burned out on the genre the way that I am. It’s well-written, with sympathetic characters and a perfectly fine plot. My main objection was the presence of a number of familiar tropes, but where would romance be without tropes? Still, for me Dukes Prefer Blondes felt bland, and so my grade for it is a C+.