Though I fretted for almost two years waiting for this book, I can see from your author’s notes that you’ve had a lot to keep you busy having had your own little egg, as the dragons would say, in the interim. Still, what a book you’ve written for us. Excitement, danger, new breeds of dragons, a harrowing journey to and across a new continent for Temerarie and Laurence, Granby and Iskierka, Kulingile and Demane plus 200 sailors and one airsick ambassador – the action zipped along and kept me riveted. It was a wait but the wait was worth it. 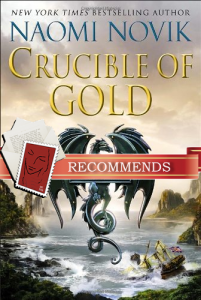 William Laurence, formerly a Captain in His Majesty’s Aerial Corps, is skeptical when Arthur Hammond arrives from China with news that the Admiralty has restored Laurence to the Corps and that they are to travel from the valley where he and Temeraire have been establishing a home to Sydney and thence aboard a dragon transport to Brazil. Oh yes, the restoration comes with strings attached and those strings are going to cost dearly.

News has reached England that Napoleon and theTswana Kingdom have formed an alliance. The French will transport the Tswana dragons and warriors from Africa to Brazil and in return, the Tswana will besiege the Portuguese slave holders who hold many of the Tswana people in bondage. Why should the British care? Because Portugal offers a foothold for British troops even now trying to establish an army on the Iberian Peninsula in order to strike at the French. Hence all aid that can be rendered to the Portuguese colony must be done.

So along with Kulingile and Iskierka, returned from India aboard the dragon transport Allegiance and even more insufferable due to having been involved in several prize captures, Temeraire and his ragged crew embark for the trip to South America. But disaster awaits before they reach their destination and in a bitter twist of fate the dragons, remnants of their crew, officers and assorted worthless sailors from the transport find themselves prisoners of the French before being essentially marooned. It takes a stroke of good luck for them to reach the continent where they face an even bigger challenge – the still mighty Incan Empire which is being heavily wooed by the French. Can the British save the day for King and Country? Or will they be lucky just to save even their own lives.

In my review of it, I made no effort to conceal the fact that the last book, “Tongues of Serpents” had large sections which bored me to tears. The slog through the Outback of Australia went on and on and I felt mentally dragged along with them for the whole damn journey. So when this book began with Arthur Hammond landing in Australia after a long journey from China, and the first things he saw were bunyips and more bunyips, I would almost swear I said aloud, “Jesus wept.” Thankfully, the bunyips were soon left behind or I might have lost my mind at the thought of another book filled with them.
Instead, oh joy!, the action soon shifts to the dragon transport and, even better, Rankin and his ilk remain behind.

Kulingile is still growing, Iskierka is even more of a Grand Diva than ever – often driving Granby to want to beat his head against a wall at her antics – and Temeraire is thrilled at the chance to return to active duty – to uphold Laurence’s honor at what they did – and to action – where he might hope to take his share of the prize money and thus be able to outdo Iskierka in finery. A dragon must maintain his dignity and pride, after all.

Whereas the last book was filled with a large section that became old, same old, this one has something new and interesting around every corner. I recall a tidbit from an earlier book, “Victory of Eagles” perhaps, about the Incans and their dragons and had hoped that a future book would feature them. That book is this one and it’s fascinating to see the relationship between those dragons and “their” people. Though the Admiralty, aviators and general populace of Britain might look with some misgivings at British dragons getting any more outlandish notions in their heads. There’s also enough gold and gems there to satisfy even Iskierka’s avariciousness though Granby is less than thrilled at the means and methods she’s willing to employ to obtain them.

But wait, there’s more! A harrowing flight over the Andes Mountains and across the width of the continent tests the men, dragons and ladies to their limits before they finally arrive where they initially set out for. Years ago I read a travel book called “Up the Orinoco” that gives me an idea of what our intrepid band is up against in the jungle. There are enough details here to flesh out horrors yet also neatly skimmed through so that I never felt as if I were stuck swatting the insects, mopping the sweat and darting back from the shoreline to avoid the river crocodiles. Thank you.

There’s also conflict galore. Laurence has to battle with himself about accepting reinstatement and face another who suffered the fallout due to Laurence and Temeraire’s actions. Temeraire and Iskierka alternately huff and flounce over her relish of fighting, her high handed demands and how much she flirts with an Incan dragon. Granby despairs over keeping Iskierka in check before finally laying down the law. The British delegation muddles through learning about how to go on in this strange land before fleeing for their lives and all too soon are faced with the irreconcilable demands of trying to placate the Portuguese in the face of the justness of the demands of the Tswana.

However there are a few things which seem to be picked up and discarded at will or whim. Initially there appears that there will be some continuing friction from the aviator community against Demane for harnessing Kulingile. A budding relationship between Demane and Emily Roland begins only to have the entire thing dropped. And after an initial period of trouble, the 200 some sailors are seldom a real concern for the remainder of the book.

Still, I’m just so delighted not to have anything remotely near a repeat of the last book that reading this one was a joy. Where will everyone go next? Intriguing possibilities are presented and one character is revealed to be far different in position and situation than has been thought up until now. As well, Laurence’s actions might either forge a new and lasting alliance which could help Britain fight on against the French, or alternately this could merely serve to remind the Admiralty of his tendency to free thinking beyond that required of a military captain. Only time, and the next book, will tell. A-

→ Jayne
Previous article: Must have Android Apps (non-reading)
Next Post: What Sunita was reading in February