“Georgia, Countess of Maybury has it all, but then her husband is killed in a duel and she loses her homes, most of her possessions, and her reputation as well. Innocent of all charges, she returns to the beau monde determined to regain all through a second brilliant marriage, but a scarred ex-naval officer threatens to tempt her in a different direction.” 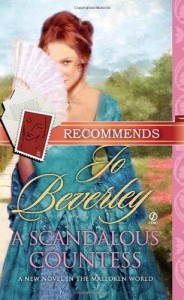 I’m always up for a revisit to your 18th century Georgian world of the Mallorens. We recently had a discussion here about series and as I mentioned then, I enjoy seeing a few of the past characters but am also happy that Rothgar and Diana are peripheral, mainly mentioned but not present. Portia and Bryght have more face time and nice to see them again after an absence of a few books. As always I’m in love with little period details such as the mantua maker’s fashion dolls, the water systems of London, and how the grand lived. Plus when Georgie and Dracy visit with his Naval pals, I felt as if I were in Mrs. Miggin’s Pie Shoppe! The Perriam family is powerful and clever and knows how to manage the Polite World in which they move. The Countess of Hernescroft staging the morning after the duel is enough to scare lesser men. As well the reminder is there of their influence when the inquest is managed.

The basic plot here is a mix of beauty and the beast, wealth vs want plus a touch of a stalker thrown in. Georgie might be a difficult heroine for people to love. She is dazzling, flirty, showy, loves to be the center of attention and isn’t good at deflecting men away and towards other women. She has two main gal pals but gets along fine with men and is the kind of woman who seems to prefer them and their company. She just doesn’t DO the faux kiss-kiss “let’s do lunch” kind of thing. Men love her but most women don’t, especially any woman who thinks herself pretty. That plus the catty beau monde – ready for the next juicy scandal – ensures Georgie a rough time when she tries to slip back into Society after her mourning period ends. But the woman also has backbone. Society viewed her marriage as a constant party filled with a luscious London town home, clothes to die for and a handsome husband ready to indulge her. What it didn’t see – and would never see – is that it was also an escape hatch from her parents.

Georgie isn’t fluff. She’s made of sterner stuff than that – she’d have to be with that mother. Georgie might flaunt a few rules but she’s well aware of them. She thinks through a problem, sees angles and outcomes and doesn’t fool herself- she is eager to get to the bottom of who is threatening her and – what really got me pumped – she doesn’t go missish at the thought of the villain going down for what she’s suffered through. When push comes to shove, she takes matters into her own hands and delivers justice. True there’s a little breakdown sobbing before this when she seems intent on blaming herself For All but by the end, she appears to have got over that.

To contrast with beautiful Georgie there is Dracy who was handsome – still is when viewed from the correct profile – but who’s lost his perfect looks to a war injury. I kind of like that initially Georgie admits that she’d hate to lose her beauty – after all, it’s what she’s known for. But she’s got the guts to look him straight on and never flinches from his face. Part of her growth over the course of the book is to realize and admit that looks aren’t everything. Dracy has chutzpa and doesn’t hide his face – not that he’d do it anyway after mainly being in the presence of fellow Navy men who would be used to this. You’ve made Dracy a military man and thankfully included this mindset and appropriate details as part of Dracy’s personality – how he’s a man of action when trying to discover who threatens Georgie and then proactively protects her once the threat is identified. But also he doesn’t know the beau monde as well and needs some lessons in estate management. These little landlubber touches make him seem more rounded as a character.

Georgie’s family presents some realism of the day. Her sister in law is ghastly, her sister viewed marriage as a social contract with no thought of love, and Georgie is a marriage pawn – controlled and commanded by her parents. Her first marriage wasn’t great in the sack but while she still loved Dickon, truly mourned him – I smiled at this too, she also mourned the loss of her freedom, the money and the perks. You sprinkle some chilling examples of other couples who had made social mismatches so Georgie has plenty of time to think about the step she’s taking in marrying a man of lower rank. But then it’s not as if Dracy is a candlestick maker – she still will be a Lady Something even beyond her courtesy title as the daughter of an Earl. Then I gotta love a woman who lights up at the thought of tackling her husband’s clusterf*cked household account books . I also picture Georgie enjoying extreme couponing 18th century style.

While Georgie and Dracy contrast in looks, they are alike in personality which is shown from early on. Dracy initially thinks he wants a quiet life in Devon with a placid wife who knows about getting rid of moths and sleeping pig sickness. But does he really? The Earl of Hernescroft pegs Dracy and his military personality which relishes a challenge and wants to be stimulated. This is mirrored in the easy way Georgie and Dracy get along from the very beginning. They jest and joke and laugh and the falling in love seems so easy yet there’s still the money issues which Georgie is honest with herself about. Until her friends point out she loves a challenge and what could be better than the little fixer-upper Dracy has for her in the wilds of Devon? The Countess of Hernescroft’s reaction to her future son in law’s house is hilarious.

I thoroughly enjoyed my yearly visit to the Mallorens and watching Georgie and Dracy work out their differences while delighting in their similarities. Still the business of uncovering the vendetta plot had better hold the reader’s attention or they’ll be bored with this one. In the end, Georgie and Dracy are matched in what counts – love, commonality, boldness, laughter and friendship. B