When I was looking at the Harlequin Historicals for this past April, this cover seemed familiar to me. The generic blurb rang vague bells. Looking back through my reading list, I discovered why. It was first published in 2004 and I had read it then. Curious to see how it would hold up, I decided to read it again. 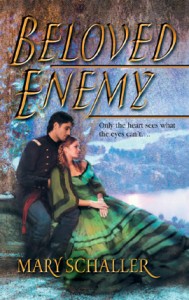 Julia Chandler lives in Alexandria, VA with her staunchly Confederate family. Their political views have almost totally ostracized them from society as Alexandria has been occupied by Union forces from across the Potomac. Most townspeople have either embraced it or made their peace with it but not the Chandlers. As such, Julia and her younger sister long for the chance to go out a bit. Dance a little, flirt and have some fun. Their chance comes when they get the opportunity to attend a masked New Year’s Eve ball. Only suddenly Julia has another, very important reason to attend.

Julia’s fiance was killed at Manassas and her mother is hot to get her married off before she turns, gasp, twenty-one. And the man mama picks, a second cousin, is enough to make Julia’s skin crawl. Julia knows he’s a bully and wastrel but mama won’t listen. He’s family and an entree to Richmond society. So, gathering her courage, Julia sets out for the ball looking for a man to “ruin” her hoping the resulting scandal will force her mother to chance her mind.

But the man Julia finds is not only too honorable to ruin her but he’s also taken with this pretty young woman who can quote Shakespeare. Major Robert Montgomery of the Rhinebeck Legion has no reason to love Rebs since they started the war and he lost the use of his hand at Gettysburg due to a Reb minie ball. But he finds himself engineering meetings with Julia and thinking of what might be. Until his superiors at the Office of Military Intelligence offer him a chance help the war effort by infiltrating the infamous Libby Prison for Union officers in Richmond and helping with a massive breakout. By agreeing to the plan, he thinks his chances with Julia are over but Julia has other plans.

A good book will make me want to learn more about the history behind it and this one had me googling “Libby Prison” to find out more about it and the famous escape of 109 Union officers on the night of Feb 9-10, 1864. The reasons behind the plan that are told to Rob – that the recent cessation of prisoner exchanges have left the Union forces with a dearth of experienced middle level officers needed for the planned military campaigns of 1864 – make sense. Whether it was true or not I don’t know but it sounds plausible. And you work the actual event so well into the story that I wonder if something like it might really have happened. The addition of Miss Lizzie “Crazy Bet” Van Lew, a Richmond native who worked undercover as a Union spy and who helped with information for the breakout, as a secondary character also helps me buy into the whole plot.

I like Rob and Julia even though a time or two they made some snap judgments. Julia comes across as extremely naive – she has no idea what being “ruined” entails – but then I thought, how many gently brought up young ladies of the time would? The fact that she and Rob can extensively quote Shakespeare to each other makes more sense since they’re both supposed to be highly educated people and this was an age when such memorization was more common. Their realization that they’re in love comes fairly quickly though they do at least question it a little before diving into it. Another thing I enjoyed is how the differences between war torn Richmond and Alexandria, with its proximity to Washington, are highlighted after Julia’s trip south.

I recall that it was about this time that Harlequin seemed to be shortening their Historicals leaving their authors with less time to flesh out the stories. I felt then and still feel now that there are a few things about this book that might have been handled better given more space. The Chandler family is supposed to be isolated among Alexandria society but aside from being told this in relation to attending the ball, little of it is shown. I would like to have seen more of Julia’s feisty younger sister who seemed like a great character with sequel potential. Julia’s bully mother, who ruled the family with the threat of her “nerves,” was a nicely done nod to the stock Southern woman stereotype though she descends into “foaming at the mouth territory.” The villains of the book are fairly standard and suffer from the lack of word count needed to flesh them out but I do like the twists that you use to bring them to their ultimate downfall. But the major shortfall of the book for me is the lack of much attention to the subject of slavery. Julia tosses out the information that their two house servants were once family slaves to whom her father gave their freedom after Lincoln issued the Emancipation Proclamation. Yet after that, there’s almost nothing on the subject beyond a trite thought from Julia that the Yankees just don’t understand the institution as practiced in the South. At that point, I thought “I need some realization from her that her thinking is wrong.” I never got it.

Overall, the book held up fairly well as a reread though I’m curious as to why no mention is made that it is a reissue beyond the original copyright date. I would give it a B- for the unusual setting and nice use of actual history but a fail in regards to the issue of slavery.