I confess that I am not a devoted reader but it’s not because your books aren’t pleasurable reads. They are but I tend to think that now the books are published in hardcover that they aren’t likely to be geared toward the romance reader. Heron’s Cove, however, provides a good dose of romance along with its mystery. I’d categorize this more as a cozy mystery because while there is a little suspense, there is no real danger to the characters and nothing gruesome is described. Only one character actually gets injured. 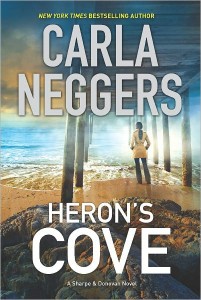 This is advertised as a Donovan and Sharpe book and appears to pick up where a previous book left off. The two main characters are Colin Donovan, undercover FBI agent, and Emma Sharpe, rt crimes expert for the FBI. Previously on Donovan & Sharpe, the two characters fell in love or began a relationship.  I wasn’t really clear on what their feelings were for each other at the beginning of this book other than they were exclusive lovers who cared for each other.

Emma is a former noviate but left the order to go into the family business which is the investigation of art crimes.  Usually the family consults for private individuals but Emma decided to join the FBI. Those complicated and weighty decisions must have been covered in a previous book as they were only lightly referenced here. Given Emma’s former occupation, I was surprised at how unreligious she was.  Even if she had left the Order, I would have thought that spirituality would have remained part of her mindset.

Colin Donovan is a deep undercover agent purportedly on the edge of burnout.  He’s sitting on a cache of weapons and is trying to sell them, in hopes of finding some individuals high up in the weapons trade. Instead, he is taken hostage and his captors debate killing him.

This book read like an episode in a TV series. Nice to visit but not memorable and relies a great deal on coincidences. Emma and her grandfather once did work for a Russian billionaire Dmitri Rusakov. He seeks her aid because a Russian folklore collection which was initially stolen from him by his former wife may be returning to him by his former wife’s daughter, Natalie.  I wasn’t exactly sure why everyone was converging on Emma’s town of Heron’s Cove or Colin’s nearby town, Saint’s Cove.  Why did Dimtri need Emma’s assistance?  Why come to Maine?   Tatiana Pavlova, a jewelry designer of exquisite talent, comes to warn her off of Dmitri Rusakov. Rusakov’s appearance brings an old attraction of Emma’s back to town.

As for the romance angle, it’s present but understated. Colin is taken aback that Emma is baking pies and visiting his parents.  Isn’t that taking it a bit too fast, he thinks?  Emma is tight lipped about her family’s past history and her own with Dimtri and Dimtri’s security specialist.  Colin is irked by this and seeks to gain confidences while at the same time slowing the pace of their relationship (which didn’t appear to be moving in a forward direction in my opinion).  Colin is Emma’s first physical relationship beyond the nunnery.  While I thought there was plenty of chemistry between the two, I didn’t get the sense that the two were good for each other.

There is a bunch of half starts here and it’s a superficial look at everything from the suspense to the relationship.  It’s an easy read with a little mystery and not much danger.  I like my romantic suspenses a bit more gritty and while I am grateful to avoid the serial killer dominated thrillers, I could have used a little more action in this one.  The motley crew of Donovan brothers, Sharpe family members, and the haunted Irish priest provide plenty of characters to fill the pages.  C

→ Jane
Previous article: Thursday News: Emily Giffin stirs up a sh!storm; US Navy SEAL reveals all (and not in a good way); Katherine Hawkins’ cover appropriated by another author
Next Post: JOINT REVIEW: Spice and Smoke by Suleikha Snyder