After enjoying Playing for Keeps, I immediately started on the second book in “A Neighbor from Hell” series. The title is apt because all Trevor Bradford wants is perfection. The concept that you tried to sell here is that the inside matters more than the outside, but the execution of it faltered and not just because there are grammatical and proofreading issues throughout. No, my real problem with the book was the unintentional size-est message that permeated the story. 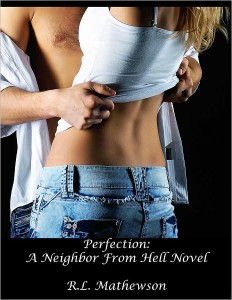 Trevor, like his cousin Jason, is an asshole. He will only date certain types of women – beautiful and thin. He expects to marry someone who is a perfect cook, financially well off, “tall, hot, and have a body that left him panting for more.” He owns a home with a rental property and shares this space with Zoe O’Shea, whom Trevor describes as “short, chubby, pale, and plain.” When he catches himself staring at her chest (encased in a perfectly normal t shirt) he thinks to himself, If he was checking out a woman like her it really had been too long since the last time he got laid. When he steals her food order, she marches into his space to get it back and Trevor response is “It’s not like you need it.”

He thinks women play dirty pool by trying to trick him into marriage by using his food disability against him (yes, he refers to his appetite and weakness for food as a disability).

Not that he could fault them for wanting to marry him, he couldn’t. He was a Bradford after all, but he didn’t appreciate their fucking games. How many times had a woman hinted at marriage while she held a casserole under his nose or woke him up with breakfast in bed, musing how nice it would be to do that for him every day? Then when he didn’t drop down on one knee and propose they’d withhold all those tasty treats they’d promised him.

Trevor’ insult combined with Zoe losing her job provides the impetus for Zoe to make changes. She gets a new job at Trevor’ family’s construction firm. She starts dieting. She starts standing up for herself. Zoe’s weight is a big part of the story. Many characters call her fat and plain, of course, including the hero. But as Zoe begins to lose weight, Trevor begins to find her more attractive. But Zoe’s weight loss is dangerous. She goes on such a severe diet that she faints. Her boss, Jared (and Trevor’s uncle) actually lectures her on not eating enough.

As Zoe begins to become more comfortable with her body, she decides to venture out to a bar and pick up a guy for a night of sex. Trevor ends up being at the same bar and scares away the other men despite having thoughts like these:

What the hell was wrong with him? he had to wonder when she didn’t spare him a glance. He was a fucking Bradford for Christ’s sakes. Bradford men were known for being studs and this small, normally plain woman, couldn’t be bothered with trying to get him into bed when she was clearly desperate for it was really fucking insulting.

Obviously I am supposed to appreciate that Trevor is attracted to Zoe in spite of himself, but Trevor’ thoughts are so insulting that I keep hoping for Zoe to find some random guy who would actually appreciate her. But Trevor is the hero so he manfully steps up to be Zoe’s sex buddy.

The story is fairly obvious in that the Zoe is having regular sex, is fainting and is often sick, but only at certain times of the day with no feverish symptoms. Both she and Trevor become insanely concerned that she is sick. I guess they missed health 101?

When Trevor punches out some guy for calling Zoe fat and plain, I wonder what for. Trevor thought those very same things about her and never felt terrible about it. I guess I am supposed to see Trevor as a neanderthal who recognizes that it isn’t how you look on the outside but the transformation isn’t that Trevor begins not to judge people’s worth on their face and form, but only that Zoe becomes beautiful to him because he begins to love her.

The message that is supposed to be sent is that beauty is in the eye of the beholder, but Zoe isn’t attractive to Trevor until she starts losing weight and this is only reinforced by the epilogue wherein Trevor kindly tells us that while Zoe never lost more weight, “she also hadn’t gained any even with the pregnancies.”

The fumbling execution made Trevor come off as a real superficial jerk. I know that I’m supposed to feel sorry for him because he had a shitty childhood and suffered from dyslexia but his failure to acknowlege his own prejudice and selfishness meant he maintained his own terrible perceptions of everyone else around him. He never changed and Zoe deserved someone much better. These problems are on top of the poor editing, content and copy, in the book. D