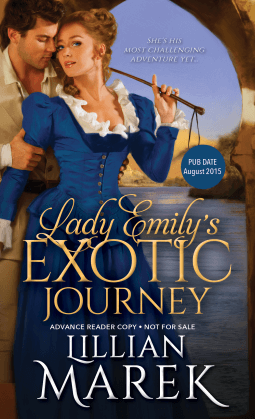 Safe in the embrace of her loving family, Lady Emily Tremaine longs to feel more intensely alive. Surely the magic and mystery of Assyria and the fabled ruins of Nineveh will bring about the transformation she seeks.

To the woman his heart desires

Scarred by his past and estranged from his noble grandfather, French adventurer Lucien Chambertin desires neither a home nor the chains of emotional attachment. He seeks only to explore the far reaches of the world. But he did not know the world contained the likes of Lady Emily—whose curiosity and sense of wonder match his own.

I saw this listed at netgalley and thought, wow cool. A historical set in the Middle East. I have to request this. The story started well for me with my initial impressions being of strong women (both older and younger generations) and an aristocratic husband who knows when to get out of his wife’s way when she’s doing her behind the scenes maneuvering.

Emily and her advanced POV family decry the fact that the British embassy looks so “English” but isn’t that the point of it? They do acknowledge this but did every English diplomat or member of the embassy except James Oliphant have to be portrayed so negatively? While Emily and Co are certainly not for unrestricted social boundaries, they have upper class noblesse oblige. Lucian’s French grandfather has the attitude expected of one who knew the ancient regime and had watched society upended.

Emily and the other women in the party at least have the sense to accept the restrictions they must live under during the journey and do nothing TSTL just to exert their independence. Lucien also finds himself impressed with Emily’s lively curiosity and zest for the adventure of the trip and discovers that here is not only a beautiful but also an intelligent woman he can talk to and be friends with. But it’s about here that the troubles began as I noticed that he rhapsodized on and on about this at length, positively comparing Emily to the insipid French women he knows as well as mentally glowering about his imperious grandfather.

Yep, as I said, the trouble for me started around the 1/4 mark of the story. The title lead me to believe that this would be a fun adventure story set in the Middle East. Instead things like “one week later” or “two weeks after that” began to appear and it dawned on me that I wasn’t really seeing much excitement or much of the journey. It was more like “Lady Emily’s Slightly Tedious Summer Vacation” instead of exotic journey.

When the group arrives at Mosul – yes, finally maybe some adventures! – the narrative again bogs down but this time because of the inclusion of a socially boorish French archeologist and his bratty 14 year old daughter. As well, it’s more Emily and Lucien endlessly “think, think, thinking” about each other. There’s one paragraph of description of the beauty of a Mosul sunset then 2 pages of Emily thinking of Lucien. Lucien angrily sulks about going back to France then, yes you guessed it, returns to thinking about Emily.

Lady Julia seems blissful to happily accept James Oliphant’s mixed ethnicity after one short visit to his mother’s Bedouin camp but then given her mother’s skanking around and the fact that Julia has been terrified of accidentally marrying a blood relative among the English aristocracy it’s more understandable. I did think her hysterics about not being accepted among the ton were strange given that she’s at least the acknowledged daughter of an English Earl. As Emily pointed out, half the aristocracy is probably illegitimate. He loves her, she loves him but no! she sends him off for a three day cooling off period just to make sure he still really wants to marry her.

Just when I thought the mental obsession would never stop, suddenly! Lucien finally admits that Emily is his lady love instead of just a friend. She’s a goddess! She’s his one and only! And before you can snap your fingers, he zips across the space between them, taking her in his arms, kissing her like mad and practically dry humping her. I might be rolling my eyes but at least something is happening. Until Emily puts the kibosh on it by refusing to be a tie, a distraction to Lucien on his future exotic journeys – though if they’re anything like this one, she’s got nothing to worry about. Now we’ve got not one but two couples, obviously in love, who insist on Being Noble and Dramatically Denying Themselves for the sake of the other. No, I must Be Sensible.

Oh, my God. You must be stupid, I’m thinking.

At this point I began to amuse myself by viewing this as a historical YA and played with how it would be with texting, twitter and Facebook. I had to find some fun and keep my blood pressure down. But no, even that’s not enough when I realized with horror that the Evil Other Woman was going to be a petulant 14 year old schoolgirl. And when her dastardly plans to eliminate Emily from Lucien’s life get easily thwarted, the silly twit proceeds to throw an immediate foot stomping tantrum and shriek the entire plan to a befuddled Emily who stupidly can’t seem to grasp what just happened to her.

At this point, I’d had enough. I had reach barely more than the 50% mark and I hated the characters enough to want to tip them in the Tigress. It was stop reading or risk my sanity. DNF