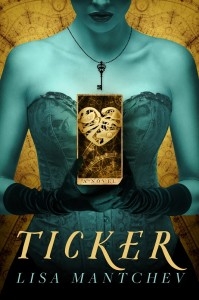 Ticker is another book that I acquired through the Kindle First program. What that has meant so far, now that I’ve read about four or five books through Kindle First, is that generally the book (or perhaps more accurately in this case, the genre) is not one that I would’ve sought out on my own.

In the case of Ticker, the genre is steampunk. Actually, I didn’t realize until I was almost finished reading Ticker that it’s more specifically young adult steampunk, which explains, I guess, the fairly PG-13 nature of the romances. Not being much of a steampunk reader, and not expecting a romance at all, necessarily, I didn’t think much about it one way or another. I will say that the book didn’t have a YA feel in terms of being very simply written or less sophisticated in plot or characterization (that’s not to say that all YA books are like that, but some are). The characters were teenagers but didn’t necessarily act like teenagers or have teenager-ish lives – they all worked, for one thing, at fairly high levels in some cases. That was a little odd to me, but whenever something didn’t make sense I just figured it was a steampunk/alternate world thing.

Penny Farthing has a congenital heart defect, one shared by her dead sisters Cygna and Demetria, who died at age one day and 18 years, respectively. After Penny (behaving in an irritatingly reckless manner) fell from a horse and her heart stopped, her doctor (and Demetria’s erstwhile beau), Calvin Warwick, desperately implanted an early and imperfect prototype “Ticker” in her chest. The artificial clockwork heart, which has to be manually wound regularly, was meant to buy her time while Warwick worked on a perfected “augmentation.” As the first in Industria (think Victorian London in culture if not geography) to be Augmented, Penny is viewed by some segments of society as a freak, perhaps with some reason. After Penny got her Ticker, it was discovered that it had come at a high price. Warwick was something of a mad scientist, and in the attempt to perfect his augmentations and to give Penny a heart that would last, he kidnapped and murdered dozens of people, innocent victims (including children) sacrificed for his experiments.

Now, Warwick has been convicted of murder and is expected to be sentenced to death. But on the day of the sentencing, chaos breaks out. The Farthings’ factory is bombed, injuring Penny’s beloved twin brother Nic (the only Farthing sibling not subject to the heart defect), and the twins’ mother and father are kidnapped. Soon Penny and Nic are running hither and yon trying to rescue their parents with the assistance of Penny’s friend Violet (also Nic’s sweetheart) and their dashing friend Sebastian. Possible help (and a verbal sparring partner for Penny) comes in the form of Marcus Kingsley, “Proprietor and Legatus legionus” of the Ferrum Viriae. Three years of high school Latin a million years ago allowed me to recognize the Latin but not translate it – I needed Google Translate for that. Ferrum Viriae means “iron men”. Legatus means “ambassador”. Legionus doesn’t mean anything, at least not according to Google Translate, but I got the general idea. Basically, Marcus is head cheese of a sort of private security force that polices Industria. Penny notes that he is “only nineteen or twenty”, which was the first time I realized that the characters here were all quite young (again, they don’t particularly seem or act *that* young – they do stupid stuff at times, but not young-stupid, just stupid-stupid).

Another explosion at the courthouse allows Warwick to escape and complicates matters for our heroine and her friends. Also, the discovery that Penny’s mother was working with Marcus Kingsley on an apparatus intended to “lift the veil” to the next world – allowing the living to speak to the dead – makes Penny question some of her strongly-held beliefs (she’s a skeptic who didn’t approve of her mother’s constant visits to psychics and the like in an attempt to contact poor dead Demetria).

What I liked about Ticker: the narrative had a compelling quality that made me want to pick up the book and see what would happen next, in spite of the things that I *didn’t* like about it. I think it’s because it was pretty action-packed, and though I don’t necessarily think of myself as an action fan, well-done action has its merits, one of which is that it’s very readable (unlike, say the Thomas Hardy novel which I’m reading now and enjoying; it’s good, but, still, it’s a slog).

This was probably my main tick in the “good” column, but it’s a big one; what more can one ask from a book than that it be compulsively readable?

In the not-so-good column: well, first of all, from the very first page Ticker felt like it was aggressively steampunk, like the reader wasn’t supposed to forget for even a few seconds that she was reading a steampunk novel. Curious inventions and made-up names and bizarre elements popped up in just about every paragraph. I wondered if it was just me who felt that it was overkill; I have read a *few* steampunk romances, here and there, but I’m not by any means an expert on the genre. I felt vindicated to read a couple of other reviews that confirmed that Ticker really was zealous in including a lot of steampunk elements, to a distracting degree. There’s a difference between setting a scene and hitting the reader over the head with it.

The other criticism I had may be a matter of personal taste, and it may also have to do with the genre. There was an marriage of light and dark elements in Ticker that almost felt inappropriate to me. Penny’s voice (she’s the first person narrator) is very light and breezy and sort of madcap faux-Victorian-British. She tends to be irreverent and devil-may-care. But the events of the book are relentlessly heavy: first of all, there are the murders Warwick commits (I mean, kidnapping, experimenting on and murdering children?), then the deaths that happen in the course of the book while he’s rampaging all over Industria (the courthouse bombing and other incidents). There are the deaths of Demetria and Cygna (Demetria’s death is quite recent and the family is raw with grief). There’s also Penny’s own precarious health, Nic’s resentment of  Penny (which came up late in the book and was glossed over in the end) and the implied alcoholism of the Farthings’ father (a coping mechanism, apparently, after Demetria’s passing). The very nature of the augmentations and the experiments that created them was creepy and made me think of Nazi scientists. At one point a character is discovered dead and her young child is found hidden in a crawlspace where her mother placed her to protect her. Marcus and Penny banter with the child with seemingly very little understanding that she’s now an orphan and has suffered a devastating loss. The dichotomy between the breezy voice and the darkness of the subject matter was a little unsettling, maybe even off-putting, to me. But I recognize that it’s something that may not bother other readers as much (and that also without the breeziness the book might have been unbearably depressing).

Ultimately, Ticker wasn’t really my kind of story, I don’t think. But because the narrative hummed along and kept me interested, I’ll give it a middling grade – a B-.

→ Jennie
Previous article: Monday News: Book sales, copyright use and abuse, and summer reading competition for boys
Next Post: JOINT DISCUSSION: For Such a Time by Kate Breslin