REVIEW: The Lure of the Moonflower by Lauren Willig 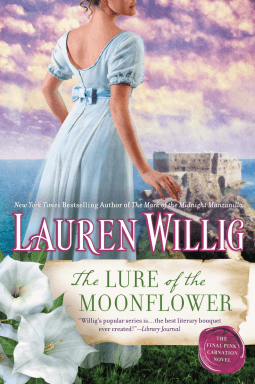 All of Portugal believes that the royal family departed for Brazil just before the French troops marched into Lisbon. Only the English government knows that mad seventy-three-year-old Queen Maria was spirited away by a group of loyalists determined to rally a resistance. But as the French garrison scours the countryside, it’s only a matter of time before she’s found and taken.

It’s up to Jane to find her first and ensure her safety. But she has no knowledge of Portugal or the language. Though she is loath to admit it, she needs the Moonflower. Operating alone has taught her to respect her own limitations. But she knows better than to show weakness around the Moonflower—an agent with a reputation for brilliance, a tendency toward insubordination, and a history of going rogue.

We knew this day would arrive as all good things must eventually come to an end. I think you’ve done a bang up job of crossing your t’s and dotting the i’s and wrapping things up here while the series is still good instead of jumping the shark. Brava.

Colin and Eloise are engaged and in the depths of day-before-the-wedding-where’s-the-wedding-marquee hell. Back up the bus, when did that happen?, must go back and recheck the last book. OMG how did I totally miss that? Are marriages outside of a Church legal in England now? Only this lot would have a mystery trunk delivered on the day before the wedding and a mystery phone call to go with it. The intersection of the soon to be by-marriage relatives is “par for the course in this series” amusing.

Meanwhile back in 1807 the Moonflower is grumbling about the stupid code phrases that spies always get stuck with when making contact. Yeah, who comes up with these anyway? Jack is suitably impressed with his contact which, considering he’s an old hand at spying so it takes a lot, says something. But Jane is up to it. OMG – again – it’s William Reid’s son. Woohoo, this could be fun. Spy vs spy on the same side. I settled in to discover who will get, and more importantly, keep the upper hand between them.

Everyone has always looked down on him and not expected him to do much. Jack’s tried to live down to their expectations. He gets the job done but doesn’t invest his soul in it. On the other hand That Woman has ideals and principles and to Jack, that makes her dangerous. She’s also assured – of her place, of her rank in society and of people doing what she says. She’s impressed him with her disguises if nothing else. In the parlance of Jack’s old soldier buddies, Jack is a killing officer. Jane is a murdering one.

Jane’s principles are a bit nice for her line of work given the knowledge she has of the French agents. Really?? I’m with Jack. It’s obvious though that, unlike Jack, she’s done little field work. She and Jack trade “most ill done by Society” examples – Jack by his ethnicity and illegitimacy and Jane by her gender. Then Jack begins to slowly dole out information which when put together with what we, and Jane, know about his background begin to point the way in the direction of why he acted as he did. Why he switched sides then switched again and still has no shame about it. And in the truth of it, Jane realizes that maybe for the first time she’s dangerously underestimated and misjudged someone. Enough that it might cost their lives.

At times, I did feel I was missing some things. Like Venice and what Jane and the Gardener did there. This gets cleared up later in the book but when things like this are just dropped in a story, I tend to think, “When did that happen?” and get twitchy. Anyway, after the fireside chat that follows the flight from the French camp, the two begin to reach a wary peace and kind of understanding of each other’s motives, backgrounds and the forces which have shaped them. I still thought Jane is ridiculously credulous to insist on not trouncing the Gardener, though. She’s seen him at his worst and knows what he’s capable of doing with a smile on his face.

Both Jack and Jane are both people who have lost immensely due to what they do. They discover just how much they have in common, just how much their business has cost them. In lost trust, lost friends, lost everything. They’ve both been cast out by family – or more in Jack’s case, cast themselves out.

Jane never lost her concentration around anyone, even the Gardener. But she does around Jack. In their business no one ever sleeps deeply without someone they trust to keep watch. But she does with Jack. And he, who prides himself in being able to sleep anywhere including on the cold and wet ground on their journey, can’t when sharing a bed with her. Jack, who learned early that loving someone means putting your heart at risk as you try to understand another human being, finds Jane worth the effort to understand and, due to their similarities, that he is able to understand her. I loved Jack’s comment to Jane about her honor not being between her legs. I recall a DA reader mentioning a similar line from another book but it’s still a good one. Yep, they’re falling.

Something puzzled me though. I was amazed that Jane and Jack speak so often to each other in (I presume) English while seemingly in fairly close proximity to the Portuguese they encounter. At some points, they are pretending to be English but at others, keeping quiet and trying to pass as natives and attracting less attention should the French come questioning would have made better sense to me.

Anywho, Jack and Jane reach a stopping place, stop for the night, decide to take advantage of the hot springs, get nekkid but still – for the most part – manage to talk, a lot, about important things. I was impressed. Then the main conflict, the one that Jack didn’t know was coming, arrives and they talk, and yell, a little more. It’s real conflict. It’s not a childish tantrum and it’s not talk-it-out-in-5-minutes nonsense. They’ve got some issues to work out and they get a start on those. Good, I thought. Then the heightened emotion leads to sexy times and I wilted a little that Jane’s rationale to give into their mutual attraction is that she wants “this one time, this moment of her heart leading her head.” I groaned “No, Jane. Not here, not now.” The only reason I didn’t stay mad was because they don’t get caught in flagrante delicto.

There’s still a mission to finish and these seasoned pros get on with it. Kudos to Jack for not arguing with Jane over who will actually beard the French to get their objective. He knows darn well she’s the best to try that and he’s willing to admit it.

Only despite all Jane’s pronouncements about thinking out every contingency and planning for everything, their plans are awfully loosey goosey, dependent on everything going their way – despite not really having much of a plan – and we all know things never go as planned. These are two top agents but it’s all very “off the cuff, seat of the pants” feel. And Jane still insists on believing in the Gardener, the ruthless agent she watched knife another agent while smiling at him and whom Jack told her gave him the orders to off Jack’s mentor. WTF Jane??

And just as silly to me is the resolution of the Dangerous Event before Colin and Eloise’s wedding. First it’s Monty Python nattering on about the Spanish Inquisition. Then after it gets serious it’s still stupid drifting into the realm of the absurd. I do, however, love Mrs. Selwick-Alderly.

The end of the historical part begins to look like a family reunion at the old home place. Farcical describes it well. I know it’s supposed to be cute but it’s more annoying than cute. I’m with Jack. If set in the midst of that lot I’d think I was in a loony bin too. The resolution of the mission was actually a bit of a let down. And then the gooey, gushy, stuff started up again. I can happily do without any more members of the League. Oh just please let them shut up.

Jack feels he’s gone from noble and wronged to just wrong but for my money, he’s still got some grievances. He’s been lied to, manipulated and has had to put up with nitwit Miles. More than any man should bear. Yeah, I know he and Jane need to get together because they love each other and it’s a romance but I’d hold out for a bit more kissing up and apologies from the manipulators were I him. His proposal to Jane is nice, though. What about a future? Jane’s been declared dead by her parents and Jack has self exiled himself from his family as well as leaving a trail of coat turnings that don’t exactly endear him to British authorities. The epilogue nicely sets out their future daring do.

Ah, on to Colin and Eloise now. Finally a mawwaige. I did LOL at the reference.

Jack and Jane together and on their own are great. Lots of emotion, lots of sparking off each other, lots of respect and a real sense of watching them fall in love. Stick the rest of the League in and it veers towards Whitter Land. Very OTT and silly. Even Eloise and Colin’s nuptials took a turn for the silly and bizarre. Still overall it’s been a good series. Some ups and some downs but fairly consistent for all that which is rare as most series this long tend to drop off and lose steam. I think if readers like the series, they’ll like this one. Same for negatives. I agree it’s time for it to end but I’m glad I made (most of) the journey. B-