I purchased this book a few months ago when Has from the Bookpushers recommended it. I believe I started it and set it aside because I couldn’t get into the first chapter. When the book hit the Times list, I pulled it out to read again and pushed through the first chapter to find an engaging and funny romance but not one without its problems. 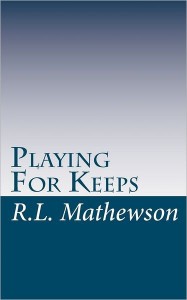 Playing for Keeps is the first in a series titled “A Neighbor from Hell” and it features two opposites: Jason Bradford and Haley. They both teach school at a local private high school and they both own houses next door to each other. Haley’s home is well cared for, with a garden of flowers and well manicured grass. Jason’s home is a grown up frat house complete with discarded beer cans, rowdy parties resulting in property damage, and unhappy women who screech (author’s word) from the yard.

For shy Haley, five years as Jason Bradford’s neighbor has become hell. She’s tried to sell her home but each prospective buyer has been frightened off by Jason. Worse, she has to contend with Jason sneaking into her classroom and “borrowing” supplies and generally making her life miserable.

Haley’s limits are reached when Jason starts yanking out tulips from bulbs her grandmother had given her, ostensibly because the tulips are encroaching into Jason’s yard. Apparently crab grass and weeds are okay to proliferate but the petals of a flower somehow enrage Jason into action.

Jason knew he had gotten off to a bad start with Haley when he arrived on his move in day, locked out, and in desperate need of a bathroom. It was, as Jason recounts, either piss his pants or water the tree and he choose the latter. Since then Haley has treated him like a pariah and every time he’s tried to make amends by repairing damage or explaining himself, Haley has ran away. Her frightened rabbit routine makes him feel even worse and so, Jason being a five year old, lashes out by behaving in worse ways. Plus, he admits that he’s an asshole, albeit a likeable one.

What makes the story work is that Jason is indeed a likeable asshole, the likeability factor coming primarily from his weakness in regards to food. Jason (and apparently all Bradfords) are addicted to food and can easily be lead around by their stomachs. It is also the source of much humor in the story.

“Are those,” he noticeably swallowed, “brownies covered in peanut butter frosting?”

Did he just whimper?

“They’re chocolate chunk fudge brownies with peanut butter frosting,” she clarified automatically as her eyes caught the murderous glare Amy was sending her way. She was just about to hand the plate over to Jason and leave when everything in her stilled.

After last night she was through with getting pushed around and being intimidated. She was sick of missing out on things because she was too scared to do anything about it. She was a grown woman, damn it, and if she wanted to party it up at her first kegger then she was damn well going to do it and she was going to have fun doing it. Even if it killed her, and judging by the mascara glare being sent her way that was a good possibility.

“Let me just take those off your hands so you can grab yourself a beer,” Jason said, taking the plate from her, gazing down at it lovingly as he stepped back inside the house, leaving Haley to follow him.

“Hey, those look good! Can I have one?” a man she’d seen hundreds of times around Jason’s house asked, reaching out to take one.

“Back the fuck off! She brought them for me, you bastard!” Jason snapped.

After a confrontation over the flowers, Haley and Jason make peace with one another and begin a real friendship. As their friendship transforms, the two begin to lie to themselves about their feelings for one another. They are just friends, they both tell themselves. Even when they begin spending every minute of the day with each other; even when their friends and family point out they are in a relationship; and even when they begin to sleep together, platonically; they continue to tell themselves that they are just friends. When Jason is beset with the urge to beat up any man that looks at Haley, he tells himself that it is because he’s protective of his buddy. When Haley can’t sleep without Jason’s warm body behind her, she tells herself that Jason is just like a giant teddy bear.

Jason doesn’t change much through the book. The character arcs are limited although you do see Haley become more assertive. The funny situations and cute dialogue not to mention the setup power the story. It’s a fun romp. Haley is more than enough of a match for Jason and it’s funny watching Jason tumble head over heels while failing to be aware of it. Jason is not the most introspective of characters so his myopia is understandable. Haley’s is less so.

The whole book is the courtship.

Mitch reluctantly sat down. The two of them watched her walk away as Brad sat there smugly. They sat there silently for a few minutes before Jason spoke.

“Don’t even think about it,” he said firmly.

Mitch snorted. “Just because you think you own Haley doesn’t mean that you speak for her.”

Jason took a sip of his drink, nodding slowly before he placed his cup on his knee. “How about this then? I know you and there is no way in hell I’m letting an asshole like you near her.”

“So, let me get this straight. I’m good enough to be your friend, but not date Haley?”

“Why is that exactly? You don’t like the idea of some other guy swooping in and getting her first?”

“Because you sleep around, don’t care about any of the women you fuck, and treat them all like shit. I’m not letting you do that to Haley. She deserves a nice guy.”

Haley being the only decent one in her rich family was pretty cliched but otherwise it read fresh and fun.  Good enough for me to buy the second book and then when I heard that Mathewson may be raising the prices from 99c I bought all seven titles.

I’m not sure if you have these books edited by a professional copy editor or content editor, but if you do, I suggest you get new ones because they aren’t doing you any good. There are regular misspellings that a proofreader should catch and grammatical problems that a copyeditor could give an assist. I mention this only because I feel like good editing can push a book from a good read into a great read. For some readers, the roughness of the prose will not be something he or she can overcome. For many others, it will not matter. Probably the most annoying copyediting error in the book (and all other Mathewson books) is the use of the honorific “Miss” with a period as in “Miss. Blaine” I could not give a recommendation of the book to the DA readership without being clear about its publishing problems.  C+