The attraction of this book was the blind heroine but honestly the heroine was so capable that the only difference between her and a sighted person was being told on an occasion that she was blind. This is the third book in the “Adrenaline High” series. 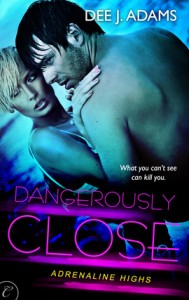 Ashley Bristol sustained an accident in a previous book which resulted in a coma.  Sequelae following the coma included poor vision which Ashley hoped would improve over time.  At the start of Dangerously Close, Ashley sustains yet another fall which renders her vision almost completely obscured with only fuzzy peripheral vision.  She is legally blind.  Fortunately, Ashley is living off a large settlement she received as a result of the first injury and is able to simply decorate her home and seek out a companion.

Despite the Ashley’s numerous problems, she evinces almost no emotional trauma from them.  Despite her lack of vision; her inability to work; and the fact her face underwent total reconstruction, her only emotional response seems to be pleasure at being prettier than she was before.  It’s not that I didn’t appreciate Ashley’s positive attitude but given all the drama and serious changes in her life, her sanguine attitude was disconcerting.  A little emotional dismay at her predicament would have been expected and even welcome.

Mel Simmons aka Seger Hughes, a famous hard metal rock star moves in next door. The singer was caught in bed with a just turned 18 year old only six months before during his latest concert tour. This scared him sober. He finished out the tour and returned to this retreat in Malibu where no one knows him, or so he thinks.  He is initially frustrated to find that the caretaker’s cottage at the back of his estate was sold to someone else but relief soon sets in when he discovers his neighbor is blind and her helper is a classical music fan. Unencumbered by his fame and the attendant expectations, Mel is able to connect with Ashley in a genuine fashion.

The “danger” in the book comes from a Seger Hughes stalker.  Paula  has very intention of being Mrs. Seger Hughes and has remade herself in Seger’s preferred form of woman: – brunette, leggy, bosomy.  Her points of view are creepy  and while I generally think a villain’s point of view is often gratuitous, here it provided great atmosphere and a sincere touch of terror.

Ashley is a bit of a motormouth and she talks almost incessantly. Mel grew to enjoy this. My eyes just kind of glazed over. A person who blathers on about nonsensical things in real life is tiresome and it’s a challenge to write a character like that and still convey the same feeling while maintaining a connection with the readers.  The problem is that Ashley rarely had anything meaningful to say. The dialogue wasn’t cute, it was boring.  Obviously it appealed to Mel more than me.

The best part of this book is the slow, gradual love that the two develop. They are definitely friends first.  Whether it was to insert sexual tension early on in the book, I felt that the characters, particularly Ashley, resorted to juvenile humor. For instance, just two days after meeting Mel she’s asking whether he got laid the night before explaining that she joked like this with her buddies in high school.  What may have been funny in high school comes off weak and contrived 10 years later.  I also wondered if some of Ashley’s character development happened in previous books. I didn’t feel like I knew her well.  She is quite flat in the book.  Mel himself was the standard jaded star.  I would have liked to have seen more of his recovery from rock star with such low morals he’s sleeping with barely turned legal teenagers to this reclusive man who wants to start making new kind of music.

While I appreciated the developing romance, I also found it lacking in tension and chemistry. I did feel like the two were well suited to each other but more as friends than lovers.  C