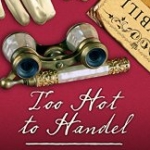 REVIEW: Too Hot to Handel by Sheri Cobb South

NOTE – this is the fifth full length novel in this series and spoilers for previous books are revealed in the blurb. When a rash of jewel thefts strikes London, magistrate Patrick Colquhoun resolves to deploy his Bow Street Runners to put a stop to the thefts. The Russian Princess ... more > 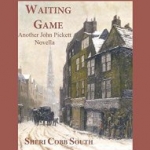 John Pickett and Lady Fieldhurst have reached an impasse as they wait for the annulment of their accidental marriage to come before the ecclesiastical court. Meanwhile, Pickett is summoned to investigate a theft at a linen-draper’s shop. Suspecting an inside job—and with a hostile hound named Brutus impeding his progress—Pickett ... more > 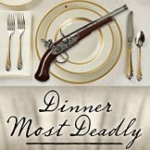 When Julia, Lady Fieldhurst, returns from her sojourn in Scotland restless and out of sorts, her friend Emily, Lady Dunnington, decides what Julia needs is a lover. Lady Dunnington plans a dinner party with carefully selected male guests from whom Julia may choose a paramour. Emily also invites a potential ... more >

When magistrate Patrick Colquhoun orders a habitual thief transported to Botany Bay, he doesn’t realize a fourteen-year-old boy has been left behind—not until young John Pickett is hauled into Bow Street for stealing an apple. Colquhoun arranges a job for John hauling coal, where John promptly falls in love with ... more >

Richard, Lord Ramsay, has been brought up from the cradle with a consciousness of his duty to his family and his name. His sense of responsibility has led him to install two elderly aunts in the Dower House; educate his cousin Peter Ramsay and employ him as a steward; and ... more >

The third installment of the John Pickett series finds Bow Street Runner Pickett in Scotland investigating a woman found unconscious on the beach–a woman who bears a striking resemblance to the local laird’s daughter, a girl missing and presumed dead for the last fifteen years. Pickett is surprised to discover ... more >