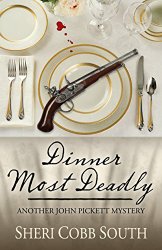 When Julia, Lady Fieldhurst, returns from her sojourn in Scotland restless and out of sorts, her friend Emily, Lady Dunnington, decides what Julia needs is a lover. Lady Dunnington plans a dinner party with carefully selected male guests from whom Julia may choose a paramour. Emily also invites a potential lover for herself: Sir Reginald Montague, a man whose urbane manner and dangerous good looks hide a host of unsavory secrets.

Alas, Emily’s little dinner is a disaster from the outset. Every gentleman at the table bears some unspoken grudge against Sir Reginald, and then dinner is interrupted by Emily’s estranged husband. He and Emily have a heated discussion that ends with Lord Dunnington’s vowing to put a stop to his wife’s pursuit of Sir Reginald “no matter what it takes.” But the coup de grâce comes at the end of the evening, when Sir Reginald is shot dead.

Bow Street Runner John Pickett is summoned to Emily’s house, where he is taken aback to find Julia. For in addition to investigating the case, he is faced with the awkward task of informing her that their masquerade as a married couple in Scotland has resulted in their being legally wed. Beset by distractions—not least the humiliating annulment process and the flattering attentions of Lady Dunnington’s pretty young housemaid— Pickett must find the killer of a man whom everyone has reason to want dead.

Ever since the events of the last book ended that story on a sort of romance cliffhanger, I’ve been waiting to see what will happen next in the relationship of Everyman John Pickett – son of transported pickpocket – and Aristocrat Julia, Lady Fieldhurst – widow of a Viscount. Because despite all kinds of romance book plots, an across the tracks relationship like this just can’t realistically occur. Right? Well, maybe.

But first, the murder mystery. Once again Julia is at the scene of a murder. At this point, if I knew Julia, I might be getting slightly wary of being around her given the number of bodies piling up. She does seem to be a magnet and John Pickett might as well be her Bow Street Runner on retainer. This time a Baron of Bad Ton meets his end after a dinner party of questionable taste and dubious results. There is no end of people who wanted the man dead thus giving John a lengthy list of suspects to question and a lot to think about.

Meanwhile, the initial meeting between John and Julia is, to put it bluntly, awkward. They didn’t exactly part ways in harmony when last they saw each other in Scotland. Plus John still hasn’t broken the news to Julia of how Scottish marriage laws affect them. Once he does, Julia is stunned, her brother-in-law is outraged, the solicitor is all over it but poor John is the one who will have to be the patsy in order to meet the requirements of the one way they can get an annulment.

Poor, poor John who loves and adores Julia with all his soul and is willing to be publically humiliated to set her free. While John might be one of the most honorable men in print, he isn’t a total wuss and I was glad to see his moments of one upsmanship over a rival, despair at losing Julia, disdain for the money offered for his cooperation and anger at what he must go through. John is definitely not a Ken doll and IMO is decidedly the stronger character of this book.

The murder still needs to be solved and John methodically works his way through the possible killers then plays a hunch. This also gives him the chance to act as a matchmaker then and later do a stint as a marriage counselor as a free bonus. John has mad skills at work here. Some clues are sprinkled through the story and I did figure out the identity of the murderer though not the motive.

I will admit that I am on tenterhooks about John and Julia. Though they might be closer than they each realize emotionally and romantically, each is well aware of the social and financial gulf between them. They’re also still not ready to bridge it either. I can’t see John turning out to be a kidnapped child of the nobility or winning a lottery so how will you manage this? I guess readers will just have to tap their feet and drum their fingers until the next book to find out. B-