It’s a cliché to comment on how quickly a year has passed and in the Covid era the months sometimes pass slowly. 2021 wasn’t an easy year so I’m glad I found some great books to make it feel a little lighter. There weren’t an entire ten but I’ve had worse reading years.

Listed below in order from the very best on down (although that order could be slightly different depending on what day you catch me) are the eight books published in 2021 that represent my favorite reads from last year.

The Jasmine Throne by Tasha Suri 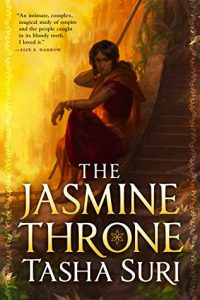 Beginning with the publication of her 2018 debut, Empire of Sand, Tasha Suri has put out three good fantasy novels with strong romances at their center, but last year’s The Jasmine Throne wasn’t just good, it was amazingly good. The wider canvas and deeper characterization afforded by the trilogy format is a great match for Suri’s skills, and the romance between the main characters, an imprisoned rebel princess and a maidservant who hides dangerous powers, each on opposite side of an oppression/resistance divide, is incendiary both in chemistry and in its ramifications for their world.

The setting here is based on India and Suri, a British Indian, is clearly invested in it. Courage and resistance, themes in all of Suri’s works, have rarely felt so sweeping, and the world is so immersive that it is in essence another character. Every once in a while, I read a book and feel that the author held back not one iota of her talent. The Jasmine Throne is such a book. A-/A. 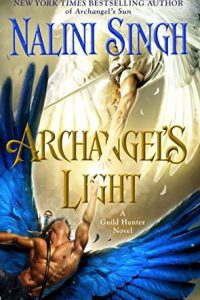 Nalini Singh has been a fixture on the paranormal romance scene since 2008, and her books are frequently absorbing and emotional. But for this, her first m/m romance and the fourteenth book in her Guild Hunter series, Singh really brought her A game. Archangel’s Light came thisclose to the top spot on my list. The book has so much that’s great—sweetness, haunting pain, gorgeous imagery, and a gritty, freaky mystery.

Angels Illium and Aodhan have both had a dynamic presence in the Guild Hunter world almost since the beginning, and readers have been clamoring for this book for years. The author laid the trail of breadcrumbs that led here beautifully in several of the more recent books, and this book delivered on that promise. The darkness and pain that has haunted Aodhan and Illium for centuries has been eclipsed by one thing—their lifelong, 500-year friendship—and now that that friendship is threatened. Those are epic stakes, and as we see Aodhan and Illium fight their way back to each other, we also see them rediscover each other, even as we rediscover them. It’s a tour-de-force, and one that I want multiple sequels for. A-/A.

Velvet was the Night by Silvia Moreno-Garcia 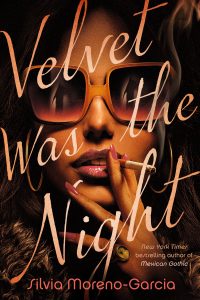 In the time I’ve been reading her, Silvia Moreno-Garcia has put out four books, each very different from the last. She’s that rare bird, a genre author who comes out with a book in a different genre every year. Gods of Jade and Shadow was a YA fantasy, Untamed Shore a domestic thriller, Mexican Gothic a novel of gothic horror, and last year’s stellar Velvet was the Night is a classic noir mystery with a twist. Like all of Moreno-Garcia’s novels, it’s an #ownvoices novel set in Mexico. Here the story takes place in 1970s Mexico City against a backdrop of student protests, an authoritarian government and Cold War tactics.

There are two main characters. Thirty-year-old Maite is a disaffected legal secretary who lies to everyone except herself. Twenty-one-year-old Elvis is part of a shadowy organization that operates in cells at the behest of an oppressive regime, and he lies to himself most of all. As they separately investigate the same mystery—the disappearance of a university art student—their lies unravel. But it is the lies they have been told that ultimately lay them, and the reader, flat.

Velvet was the Night is classic noir through and through, so much so that I can visualize it in black and white. Broody music and romantic monochrome comic books are motifs. The characters are genuinely fresh and the mystery is twisty but free of contrivances. The novel turns the sexist femme fatale trope on its head, and its exploration of the complexities of how we see others and how we see ourselves is meaningful. This is the freshest book I read in 2021, but it is not a romance. Whether it’s romantic is left to readers to decide. Nevertheless, I think it’s very much worth reading. A-. 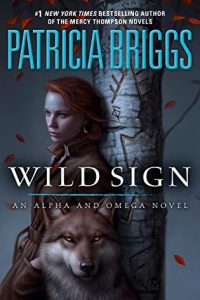 Werewolves Charles and Anna have been together through thick and thin, and through six urban fantasy novels plus an amazing introductory novella. Wild Sign, the most recent of these books, is also among the best. The disappearance of a small community causes werewolf leader Bran to send Charles and Anna to investigate a disturbing mystery that is somehow tied to Bran’s mate, Leah.

The book is not for the faint of heart; the mystery involves one of the creepiest villains in the series, a profound and chilling sense of danger, and more triggers than many readers expected. Nevertheless, it is deeply romantic and at least equally engaging, and not just because everything that tries to come between Charles and Anna only affirms their love. There’s also friendship, loyalty, and one of my favorite (non-romance) tropes, that of enemies (of sorts) turned allies. But what I enjoyed most of all was the reframing of Leah, who is quickly becoming one of the most multidimensional and fascinating women I have encountered in Briggs’ oeuvre. A-.

My review and my post on Leah and Bran.

Someone to Cherish by Mary Balogh 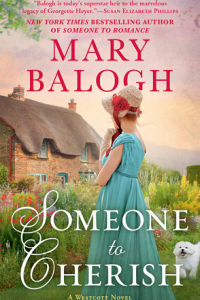 Living in a tiny village poses a real risk to a young couple who want to begin a love affair and aren’t ready to marry, all the more so when one of them is the widow of a passionately devout minister. In this historical romance, the eighth and not-quite-final book in the Westcott series, Lydia Tavernor emerges from a cocoon after years of oppression by male relatives, while Harry Westcott struggles with having fallen for a woman who needs space.

Theirs is a dance of two steps forward, one step back, executed with sensitivity by this veteran historical romance author. I could have done with fewer of Harry’s family members, but the relationship was poignant and (in the best Mary Balogh fashion) achingly romantic. There was great use of Lydia’s small, yapping dog, and Lydia’s transformation from a deliberate nonentity into a woman vibrant with life and love was triumphant. Harry was a terrific hero; I loved how he restrained himself from pressuring her even when that restraint was so hard that it was almost painful for him.

Balogh is one of a few authors I’ve been reading regularly for decades now, and this book felt like it was in satisfying conversation with her powerful but more problematic 1990s novel, Indiscreet. Even her lesser books can be rewarding, and this one is perhaps my second favorite in a generally strong series. A-.

After Dark with the Duke by Julie Anne Long 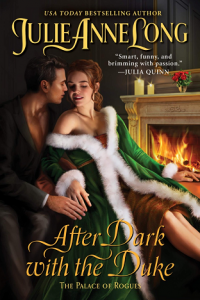 There is quite an age gap between Mariana Wylde and James, the Duke of Valkirk; she’s twenty-five and he’s forty-three. There are other divides as well—he’s a respected duke and the honored former general who, more than anyone, fought and won the Napoleonic Wars, while she is a commoner and an opera singer with a tarnished reputation. He is somber, more closed, and does not give much away, while she is more open and expressive, and an appealing performer. But when they meet while staying at the same boardinghouse and become acquainted over lessons in Italian, their attraction is a flame that can’t be doused.

Julie Anne Long is a master at writing yearning, sparks, and romantic tension, and here all are on full display. There are a couple of contrivances and anachronisms but the novel felt so fresh and creative, the characters and their attraction so rich, that it made me realize how hungry I’ve been for this kind of book. I was an early adopter of this author, having discovered her in 2006 with Beauty and the Spy, and I took a long break after 2015’s The Legend of Lyon Redmond (a low point for me) but you can bet I’m back now. Of the dozen or so JAL books I’ve read, After Dark with the Duke is second only to What I Did for a Duke, a book that is probably in my top ten or twenty historical romances. B+/A-.

The Last Graduate by Naomi Novik 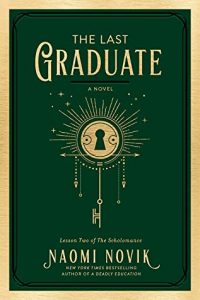 Naomi Novik’s second book in the Scholomance series may not have been as entertaining as A Deadly Education, and it has its flaws (Novik handles diversity awkwardly, and the middle was darker than I wanted to be) but it sees its heroine, El, face a different kind of adversity—attempting to unify a school where everyone has been conditioned to compete against their fellow students for survival.

Like its predecessor, The Last Graduate is peopled by memorable characters, chief among them El, who is the kind of heroine who even as she puts her life on the line to save others, kicks herself for her sticking out her neck. There are also El’s crew of appealing misfits, Aahdya and Liu, now joined by the well-meaning but privileged and clueless Chloe; Liesel, a brilliant and not particularly ethical frenemy; kids who believe their survival depends on killing El; and of course, El’s quirky love interest and somewhat bizarre school superhero Orion.

The book is an exciting ride filled with sarcastic humor and reluctant heroism, and it ends on what is possibly the cliffhanger to end all cliffhangers. When the conclusion to the series, The Golden Enclaves, releases in September I plan to be there with bells on and not just to learn El and Orion’s fate. B+.

What Abigail Did that Summer by Ben Aaronovitch 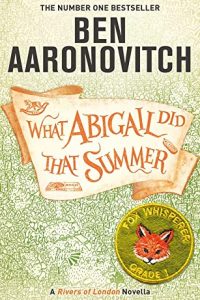 In Ben Aaronovitch’s urban fantasy series, Rivers of London, this long novella/short novel is something of an anomaly. Unlike the other novels in the series, it’s written in the first person and in present tense, and the narrator/central character in this one isn’t Peter Grant but Abigail, his thirteen-year-old niece. Here, Abigail is drawn into a mystery involving kids her age who were invited for a party by other kids and then vanished, seemingly without a trace.

As Abigail investigates, joined by a new friend named Simon, her precocious (but never annoyingly so) smarts come to her aid and that of the other kids, the heroism she is unaware of comes to the fore, and she learns more about herself while facing a moral dilemma. The middle of What Abigail Did that Summer feels a bit slow, but there are considerable rewards. In addition to a great central character, the book also has charming talking foxes, a creepy horror element, a fascinating encounter with the embodiment of the river Fleet, a wonderful appearance by Peter’s teacher and formidable wizard Nightingale, and a coming-of-age journey for Abigail. B+.

Review (probably a mini-review) to come.

If you’ve read any of these books, I’d love to hear what you thought of them!

→ Janine
Previous article: REVIEW: The Bones of the Old Ones by Howard Andrew Jones
Next Post: Review: Dark Rise #1 by C.S. Pacat