I’ve had mixed success with your books. I loved Gods of Jade and Shadow, your young adult fantasy, liked your sort-of-domestic-noir thriller, Untamed Shore, and didn’t care a bit for Mexican Gothic, the horror novel you came out with last year (I was an outlier; it was a bonafide hit). So I was torn about requesting an ARC of your most recent book, a mystery novel in the noir genre (a very different genre from today’s domestic noir thrillers—think The Maltese Falcon rather than Gone Girl) titled Velvet was the Night. Nevertheless, I did, and I was not sorry. 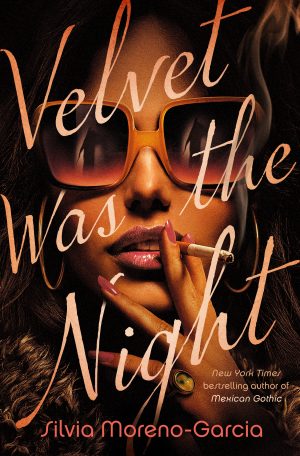 I really appreciate that you don’t write the same book twice. So far, the four books I’ve read have had a few commonalities, though, and they are all things I appreciate. They take place in twentieth-century Mexico (this one in 1971 Mexico City), feature Mexican characters, and all their heroines share a kind of restlessness, an alienation from their initial surroundings and/or communities. It is this restlessness that drives them.

Maite, one of the two central characters in Velvet is the Night, is such a woman. At thirty, she’s happy neither with her life nor with reality. It’s not just her job or her family or her body that she dislikes; it’s all three, as well as life itself—and not just how humdrum it is, but also how ugly. Nothing appeals to her or satisfies her except her record collection and her romance comics, where everyone is beautiful, everything romantic, and the most exciting adventures spread across the page in black and white. She is the most disaffected and cynical of the protagonists I’ve encountered in your books.

And Maite takes her need to escape quite far. She tells her friend and co-worker, Diana, lies about her life—stories of glamorous dates that stir admiration and friendly envy in Diana. She takes advantage of her neighbors’ trust to invade their privacy—peering into their medicine cabinet or trying on a dress from one of their closets—and collects a small memento (a cheap earring, for example) of each of these transgressions. Meanwhile, the political upheaval that takes place all around her she disregards—going beyond ignoring it to burying her head so deep in the sand that she’s barely conscious of it at all. It is her neighbor Leonora’s request that Maite cat-sit for her that changes that and that brings Maite to the attention of a young man who calls himself El Elvis.

Twenty-one-year-old El Elvis belongs to a shadowy (and shady) organization named the Hawks. 1971 is a time of unrest in Mexico, with tensions erupting between student protestors and the Mexican government. In the first chapter of the book, the Hawks disperse the protesters by violent means. They shoot innocent people at the behest of the government, but the government later disavows them and denies any connection to their actions.

The Hawks operate in cells and the job of Elvis’s cell (four young men) is to make that easy for the government. El Mago, the tough, enigmatic, and taciturn man who runs the Hawks, orders the cell members to break cameras, beat up the journalists, and destroy the film. While they are doing this, the leader of Elvis’s cell is shot in the stomach.

El Gazpacho, the leader (the Hawks can’t use their real names, only nicknames, even with each other; El Gazpacho is from Spain while El Elvis is a music lover), is also young and he is the only peer El Elvis knows and likes. The other two members of the cell, El Guero and the Antelope, are trigger-happy and deride Elvis for his reluctance to use a firearm. All four are barred from sharing personal stories by El Mago’s dictum, but Elvis and El Gazpacho are sympatico anyhow, having bonded a bit over Gazpacho’s love of Japanese fighting techniques and shared cigarettes.

Elvis also admires El Gazpacho’s intelligence and feels some loyalty to him. Which is why, despite El Mago’s injunction against stopping to help another Hawk if he is injured in the protest, Elvis rushes Gazpacho to the hospital. Afterward, he calls El Mago to tell him what happened.

El Mago advises Elvis and the other two men to lay low. In the days that follow, El Mago doesn’t tell Elvis much about Gazpacho’s condition, other than that he is recuperating but still in the hospital. He instructs Elvis to take charge of the cell and look into another matter. An art student named Leonora has recently vanished without a trace. She may have important information and El Mago wants Elvis to track her down.

Maite is also searching for Leonora. Leonora engaged Maite to watch and feed her cat for the weekend and never returned, and Maite wants the money she is owed for cat-sitting, money that Maite badly needs. She also wants the cat off her hands; Maite doesn’t like cats. She traces Leonora to a printer’s shop where she meets Ruben, a member of a student art collective that Leonora also belongs to.

Reuben is worried about Leonora, whom he dated for a while; Maite is impatient to get paid. They compare notes and their conversation opens Maite’s eyes to the volatile political situation she has heretofore made herself ignorant of. She is drawn in by the excitement and adventure of it all and she begins to look for Leonora in earnest. She doesn’t realize that she is being followed and watched by Elvis and by other dangerous people.

This was a novel that should not have worked for me but worked brilliantly. After I read it, I had to think hard about why I liked Elvis so much more than I liked Maite for at least half the book. Why I disliked Maite at first was easy to understand—alienated by choice, lies, steals, doesn’t care, hates cats—but why I loved El Elvis almost right away was harder. He participates in things I find abhorrent including killing, interrogations, government-sanctioned violence, and attacks on free speech.

The author found a lot of ways to make me care, though.

In the first place, Elvis is a loyal friend and comes through for El Gazpacho, whose life story he doesn’t even know, when his own life is in danger. He is willing to connect as Maite isn’t, but he has so few opportunities for that.

In the second, he’s far less privileged than the art students he tails, or Maite. Not only was he utterly impoverished when El Mago recruited him, but he was also neglected, abandoned, or kicked out by everyone in his life as a teen. The priests at his school thought he was worthless because he is dyslexic, his mother was happy when he fell in with a gang because it meant one less kid to house, feed, and ignore. He can never dream of the university education that many of the students take for granted, yet he is famished for education even if he doesn’t acknowledge it. Reading is a struggle for him but he chooses a new word from his cherished copy of the Illustrated Larousse dictionary every day and he repeats it to memorize it (this motif resonates with the novel’s themes on more than one occasion).

Third, it also helps that this is not a romance or a typical mystery and so the characters aren’t meant to be heroic or idealized figures.

Lastly, Elvis was not only desperate when he joined up with El Mago, but also young, just eighteen or nineteen, and he’s not much older when the novel opens. Many of us have made ridiculously bad choices at that age because we had stars in our eyes, and the book captures that well.

Elvis is smart, but also more trusting and, in some ways, naïve, than self-preservation demands, something the reader sees from the beginning. Having no other role model, he idealizes El Mago. Not for his politics (like Maite, Elvis deludes himself that he is apolitical), but for El Mago’s seductive trappings: his cool car, his elegant and plush apartment, and his enviable record collection. He hates the violent aspects of his job but loves its mystery-solving challenges. He believes that if he just works with enough persistence and competence, proves his loyalty and worth, he can someday be El Mago, have all El Mago’s coolness and magnetism (as he perceives them) himself. His idealism, is, of course, destined to be shattered. Elvis’s illusions are stripped from him in parallel to how Maite is revealed to us and to herself to still be capable of hope.

If Maite starts out unlovely in every regard, then even at the end of the book she still may not be someone you can hold an interesting conversation with, as Elvis is. But throughout her journey, the reader comes to understand the whys and wherefores of her better and better and eventually, to feel the same fragile hope for her that she begins to feel for herself. I couldn’t help but empathize with aspects of her life; they were at once uncomfortable and resonant.

The novel has other considerable strengths as well. As in the best noirs, the plot is twisty and unsettling. The book has a moody atmosphere and cinematic touches—cigarette smoke and broody music waft on the air. And it upends the most misogynistic trope of the classic noir, the femme fatale, replacing that hoary female archetype with El Mago—a different, male, and far more privileged fatal figure.

I loved the way the Cold War lingers in the background; the student protestors have communist leanings and some members of the Hawks’ upper echelons have been trained by the CIA. We get the sense that Maite, Elvis, Ruben, and Leonora are no more than tin soldiers in the US and Soviet Union’s greater deadly game.

The book doesn’t shy away from the abhorrent parts of Elvis’s job but doesn’t wallow in them either. There’s no gratuitous violence—in fact, the book could perhaps have used one more violent scene. But it’s clear that the author wants to make a point about violence, rather than sensationalize it, so maybe her choice here is correct.

I have just one criticism, but it’s significant. Because I found Maite so off-putting at the beginning of the book, it took a while to get engaged and the introduction felt very slow. My husband, who also read it, felt the same way. I almost gave up early on, in fact. Of course, I’m glad I didn’t.

There’s one question that I’m sure every romance reader will want to have answered. Do Elvis and Maite ever meet?

Yes, but only in brief and only late in the book. Elvis begins to know Maite through his investigation, but Maite knows nothing of him. Whether the novel is romantic is left for the reader to decide, but it is certainly not a romance. It is a noir mystery/thriller from its beginning to its end.

Velvet was the Night has so many interesting things to say about how if an authoritarian government is a social cancer, forces like the Hawks metastasize it, about the connection between self-image and body image, about the fallacy of apoliticism, about humanity, and connection, and music. And about how whether they are attractive or interesting to talk to isn’t the most important thing about a person, but that how sad they are might be. And it explores these themes with no didacticism, only a beguiling combination of rebel spirit where some things are concerned and calm acceptance of others. A-.