“Recently out of rehab, Sasha James is determined to keep her head down, complete her parole and never touch amber again. The chip in her neck controls her cravings for the highly addictive drug, but also tracks her every move. Not that she goes anywhere other than work and the halfway house she calls home–a far cry from her luxurious former life as lover of the mining colony’s top drug dealer, Guy Christiansen.

Agent Nathan Sterling has no desire to see Sasha fall back into amber, but his sister has become Guy’s latest conquest and the unexpectedly attractive Sasha is the key to getting her back. So in exchange for an introduction, he offers Sasha the one thing she can’t refuse–her freedom. From the chip, her parole and even the planet if she wants. Though he would be sorry to see her go…

Torn between her growing attraction to Nathan, fear of Guy and the allure of amber, Sasha accepts. But who will save her if Guy refuses to let her go a second time?”

I liked the first book, “Rulebreaker,” enough to keep going in the series despite some problems I had with it. This book gets most things right for me that I didn’t get in “Rulebreaker.” The world building is still good but this time the romance lives up to the genre of Romantic SF. 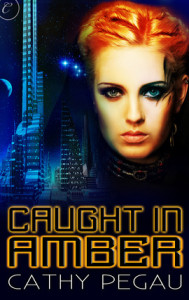 To me, this story has much more emphasis on the romance and the character relationships. Perhaps this is just my feeling based on the fact that I’ve read the first book so this “world” isn’t as novel to me anymore. But I honestly feel that the focus here is the people and not the place. Which isn’t to say that the world building is sloppy or neglected. It’s mentioned as if having an artificial eye complete with zoom lens is nothing new, like hover cars are standard and off world trading is ho-hum normal – in other words integrated into the story you’re telling rather than made splashy just for its own sake.

Sasha is a wounded heroine. She thought she knew what she was doing, thought she was in control, she turned away from her parents’ attempt to get her out of this amber world and paid the price when it all crashed down on her. She learned that Guy was a user and a controlling asshole, that she was weak enough to almost sell her soul for the drug she craved and when she was arrested, tried and sentenced to jail, that no one seemed to care. This was devastating to her – being rejected by everyone – and her self esteem sank. The terms of her parole also impose little, petty reminders of her ex-con status that serve to chip away at any small rebuilding of her self worth.

So when Sasha doubts that Nathan has any feelings for her beyond how she can help him get his sister out of Guy’s influence, I believe her and don’t see it as just feeding the plot point.

Nathan is a bit harder to read as a romance hero. But his growing feelings for Sasha seem to build in a realistic way. At first, she’s a means to an end to save his sister. Then slowly he begins to see her as a person with a weakness that could wreck her if she begins to use again. His guilt followed by worry over this seems appropriate at that point in the book. He also admires the chances she’s willing to take when she spots an opportunity to further their plan. As the story progresses, it’s her strength that stands out to him and how much he’ll miss her if she goes off world. The moment of truth arrives when he owns up to the fact that he’ll risk everything to make sure she survives a final encounter with Guy.

The undercover part of the plot works well for me too. Even though Nathan seems to be ‘seat of the pants-ing” it at times, the basic framework of his plan shows he’s put some thought and detective work into it. Still even here the main emphasis of the scenes serve to advance the characters’ relationships.

There’s nothing dramatically different about the way the resolution of the story is reached or plays out. Not to say it’s bad or weak but just that it’s a thriller ending in a story obviously set up to have a thriller ending. Sasha discovers strength she didn’t know she possessed, Nathan keeps his promise to free her from her parole, Sasha falls for this man who not only believes her but believes IN her and they both feel saved by each other. And I believe all of this because it’s shown and not just told. So next up is “Deep Deception” with another f/f romance featuring two strong women I’m looking forward to watching go toe to toe. ::rubs hands in expectation:: B