REVIEW: Damaged and the Beast by Bijou Hunter

I’ve spoken with a couple of readers of New Adult books and we three agreed that this book, despite its many flaws and its troubling presentation, is one that has stuck with us.  Farah Smith is a college freshman living her grifter/con mother in a rundown basement apartment paid for by Farah’s grandmother.  She doesn’t trust her mother, wants to break free from her con artist father, and needs to make some money so she can get her own apartment. 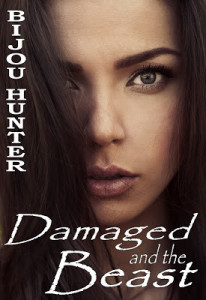 Farah’s intentions are to save enough money so that she and her younger sister can live independent of either deadbeat parent.  Farah has saved three years of tip money, squirreled away and hidden from her father, that she’ll use to pay for books and other school expenses not covered by her grandmother’s financial gifts. She gets a job at Denny’s near school and starts classes. It’s not easy for her, not her classes or making friends.

Farah’s body and face generate responses from guys around her that make her uncomfortable but she zeroes in on a guy who she dubs Sweetie Pie.

Sweetie Pie would never gamble away our Christmas money. He would never forget my birthday, though he might need hinting to remember our anniversary. He was the kind of guy who wanted to buy himself lots of electronic toys, but wouldn’t if the kids might lose out on getting something great from Santa.

But Sweetie Pie aka Nick has competition from Hot Guy aka Cooper.  Cooper is taking law classes in hopes of becoming a lawyer and running his father’s crime area.  His “taking law classes” sounded like BS to me because there is no such thing as a bachelor in law or a law school undergraduate subject.  You are either in law school or you aren’t.

Some of the reviews call Farah weak and whiney but I didn’t find her so. She’s had a pretty crappy life and her ambitious are simple as she states in the previous book quote.  She misses her sister terribly and she doesn’t feel like she fits in with the college students.  She wants the safe guy but can’t stop thinking about the hot guy.  Her emotions were all over the board but it felt genuine.

Cooper is the largest problem in this book from his tendency to constantly refer to women as bitches to his scary stalker routine and worse of all his sense of entitlement.   The reason that Cooper depiction works for me is because the text acknowledges he is spoiled and difficult. So while he is the male protagonist which in a romance is called a hero, I think that there is a subtle nod that Cooper really isn’t really heroic.  Is Cooper called on his spoiled behavior  enough? No and I don’t think Farah is right for taking him back into her life when she feels threatened and scared by him but Cooper is a far cry better than she’s ever had.

But it really isn’t Cooper that is the reason I remember this book. Instead, it is the way in which Farah’s trauma is treated differently than in so many other books. Her feelings about herself, in general, and about sex, in particular, aren’t cured the first time she has sex with Cooper or even the tenth time. There is no magic peener in this book.  Instead the sex scenes are often uncomfortable but very authentic.

The first time the two have sex, they are both a little drunk and part of me is thinking they really need to stop now and in a book with a decent hero, maybe they would’ve stopped. But Cooper isn’t entirely decent, but I wondered if it would take someone with an utter belief in his own greatness not to be beaten down emotionally by the fact that Farah wasn’t going to be cured right away.

There were some writing tics that I could have lived without.  Cooper and Farah regularly trade insults, but the pattern of them actually made no sense as if they were just playing a game of word association. They were meant to be funny but came off lame and rather inconsistent.

“Perv.” (starting with her)

I’m not sure what grade to give this book because I’ve read several books before and after that I didn’t think about as much.  I’m going to go with a B- because while there are problematic issues, particular with the hero, I felt that the characterizations were genuine and the emotional arc of the heroine different.  B-