Harlequin Historicals will still occasionally branch out beyond Regencies and I’ve come to look for your books to be among those branchees. I’d started reading in this series two years ago with “The Borrowed Bride,” but will be honest and say that I’d lost touch with it since then. Now, a few books later, the setting of the 1920s and bootlegging grabbed me and got me back on board with it. 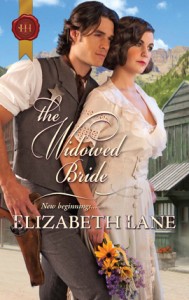 “Ruby Denby Rumford endured her monstrous husband’s abuse until death-‘by self-defense-‘did them part. Now she and her daughters seek a new beginning in Dutchman’s Creek, Colorado, but will her dark past stay buried?

With an obligation to uphold the laws of prohibition and an undercover persona in place, U.S. Deputy Marshal Ethan Beaudry comes to town ready to end a shady bootlegging ring. He doesn’t expect to find beautiful, mysterious Ruby involved-‘or be forced to choose between duty to the law and this forbidden passion.”

Wow! A historical heroine who’s offed her husband isn’t something I see every day either. Ruby has faced down the worst in marriage – an abusive husband who threatened her, beat her and would probably have killed her if she hadn’t fought back and killed him first. Not knowing much about the law at this time, I will say I find it slightly amazing that she got off as easily as she did in this era. Ruby has desires and is willing for Ethan to awaken them and satisfy her – still she isn’t sure about marriage again. But she’s also not going to let any man boss her around or treat her badly. She’s got enough nerve to stand up for herself now and not take shit from any man.

They start a sexual relationship early but it felt right. Ruby is trying to overcome her past experiences and Ethan jump starts that process. However, this makes her discovery of the truth behind his presence in town all the more wounding. Was he enjoying what they did or just using her? You give Ruby a real reason to dislike Ethan instead of suddenly turning her missish or having her bewail whether or not he loves her and I liked that.

Both have good reasons for hiding their backgrounds from each other – she faces social stigma for what she did and he can’t let the bootleggers of the area know why he’s there. I found these to be much better reasons then some I’ve read in the past. Each feels guilt over the lies but Ruby is no fool and quickly realizes that Ethan hasn’t told her everything. He is sure she’s hiding something and while he doesn’t immediately think she’s in league with the villains, he’s not going to let her pretty face dissuade him from checking out her background. They discover the truth earlier in the book than I’d expected but I like that even while Ethan is gently coercing Ruby into helping him, he phrases it in a way that saves face for her – helping him will get him out of her hair all the sooner.

Ruby has enough common sense to eventually come around to Ethan’s viewpoint and appreciate that he’s trying to do his job and also protect her from vicious bootleggers. She also neatly turns the tables on the villainous mayor’s attempts to blackmail her. Go Ruby! Thaddeus Wilton truly is an evil character – you make him quite slimy and shudder inducing. Ruby also has enough presence of mind to save herself from Harper. She’s no shrinking violet and can use her head to think her way out of problems. I love to see this in a heroine. Or hero for that matter.

You included many period details that give a great sense of time and place. I especially liked the description of the General Store filled to the rafters will all kinds of neat things. Ethan’s cooking lessons – well needed for Ruby who was used to a house full of servants – were cool too. And thank you for working the details of Ethan’s job into the story, specifically his evidence kit – it ain’t rocket science or modern CSI but it’s moving towards modern forensics as known at the time.

The main problem I had with the story is Ethan’s reasoning for breaking off his growing relationship with Ruby. I can kind of understand it but since I’ve seen this “I’ll never love again or allow my heart to be broken again” kind of stuff in so many books, it mainly makes me roll my eyes now. But even though Ethan’s reason for breaking things off with Ruby sucks, he is honest with her and tells her quickly. Thankfully he soon discovers he’s an idiot and corrects himself. His idiotness is balanced by a nice realization of his feelings once the crisis is over.

Though this is part of a series, I think that readers could just jump in here with no problems. And I hope that they will because I think it’s a good book and I’m always trying to promote the different and unusual. Now I just need to go back and look into the two books I skipped. B

→ Jayne
Previous article: Topic: Redemption or The Big Second-Chance
Next Post: REVIEW: My One and Only by Kristan Higgins