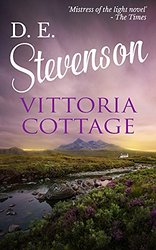 WARNING – terms The use of “N” pulled me up short. However this is immediate post-war England and the word is used once by a blunt speaking probably 50 some year old man.

Since being widowed, Caroline Dering has been content to live her life solely for her children: her beloved son, James, due back soon from Malaya, and her daughters, Leda and Bobbie. Then the mysterious Robert Shepperton arrives in the village.

At first, Caroline’s gentle heart is simply touched by his obvious unhappiness; until gradually she finds her sympathy turning into love. But the visit of her lovely younger sister, Harriet, to Vittoria Cottage, throws Caroline into a turmoil — because Harriet also falls for Mr. Shepperton …

It was not until now, when she thought she had lost Robert, that Caroline discovered how much he meant to her … she looked back and tried to determine exactly when her friendship for him had grown into love. But it seemed to Caroline that she had loved him always.

She loved him in all sorts of different ways: she admired his character and enjoyed his humour, she felt an immense tenderness towards him and her heart beat faster when he was there. These feelings were so strong that they were difficult to disguise … But with her beloved, glamorous sister Harriet evidently winning his friendship and admiration, what can be done …?

More and more of DE Stevenson’s long out of print books are being reissued and I for one am glad of it. Here the story has the usual, gentle rambling Stevenson start to book and is all about the titular cottage – its history, the family which has owned it and the current occupants there now, the Derings. Widowed Caroline, though not born there and as such one who should have been viewed by the villagers as a “foreigner” is actually more loved by them than her husband was. Then there are her 3 children: one in “Malay” (though the villagers aren’t quite sure where that actually is), one who is young and pretty and the youngest daughter who zips around on her bike with her large dog bounding behind her.

It’s when Caroline is out blackberrying that she meets Mr. Shepperton with whom she has an almost immediate connection and about whom the whole village already knows. Oh, they’re not being nosy, it’s just that a visitor to Ashbridge is such an event and everyone there knows everything about anyone. Clothing coupons are still in use and they all want to know the reason all his clothes are new.

As the opening chapters meander a bit more, we learn all about the village of Ashbridge, see more of the people Caroline has already mentioned and get to peek into daily village life. It’s all absolutely charming and easygoing. Caroline is a slightly older heroine with grown, or almost adult, children. But in Mr. Shepperton, she finds someone with whom she can relax, who thinks as she does, sees the world through older eyes rather than the careless green youth who don’t even know all that they don’t know. As with many Stevenson books and children, there always seems to be one slightly rotten one who is spoilt or willful – usually the pretty one.

This story is a really great take on middle age and how one can lose one’s self in taking care of others and how those others – especially children – don’t appreciate that fact or see their parents as people in their own right but merely as parents only. Harriet and Caroline are both at risk of losing sight of themselves – Caroline from being sucked into nothing except her children’s lives and Harriet as an actress. Not merely in her job but actually at acting which she says she must constantly work at as she’s not as good as the best ones. Harriet gives good advice if only her spoilt niece – and she and I totally agree on Leda – would take it. Now, will Caroline?

My, my – seems a lot of people, including her nearest and dearest, don’t like Leda. I don’t either. She’s a spoilt, silly creature who likes to boss people. Poor Derek is gobsmacked at the number of people who aren’t keen on his bride-to-be, including his own sister. Rhoda is a blunt, brass delight though. She tells Derek straight off she’s appalled at the thought of her future S-i-L but she’ll put up with Leda for Derek’s sake. Meanwhile, ol’ Derek is starting to see the light at the end of his marriage tunnel and that it mightn’t be sunshine.

Then there are lovely bits about the Cock and Bull Inn. I can just picture it with blackened oak beams and wandering passageways and stairs at odd places. It’s also filled with salt-of-the-Earth types who, once they get used to you, are more than willing to take you in and begin to put off their best manners around you and just act naturally. They also animatedly debate the new Socialist government and health service. This is post-war Britain but a country still dealing with rationed petrol and food shortages.

Of course Mr. Shepperton has a reason for his new duds and for leaving London at the urging of a stranger who has experienced enough during the war not to prattle on in sympathetic words about his losses but who bluntly suggests he turn over a new leaf and go to Ashbridge. Of course we know who the stranger is. Robert Shepperton is also faced with something I wonder how often actually happened – a child sent away to safety during the war who now has no desire to return to still austere Britain.

As the second half of the book starts, more characters make their appearances including long lost ones – all of whom have complexities to bring to the plot. Robert Shepperton’s wartime background is reveled explaining a lot about his physical and mental state of mind when he returned to England and moved to Ashbridge. As one character says, the strain on him must have been frightful. Several relationships are in states of fluidity – will Leda and Derek continue an engagement most question, will Caroline finally think of herself, gather her courage and say something to someone she’s drawn to and what are these hints about another young couple?

Poor Caroline has got so used to reconciling herself to disappointment and putting on a brave face that her unwillingness to put herself forward is understandable if frustrating to read. If only Caroline could hear Robert’s thoughts, the thoughts of a man who notices everything about the woman he’s come to care for. Meanwhile, her sister Harriet dishes out some good advice and then takes it herself.

There aren’t too many surprises in the ending except maybe to the people themselves. Readers and the other characters of the book see the outcomes far more easily, of course. Leopards don’t change their spots and it appears as if their experiences aren’t going to change the fundamental nature of the people we’ve come to know. One young man will prove a cad, one will try for the woman he adores and a sweet HEA finally arrives for Caroline, seemingly despite all she does to dodge it. “Vittoria Cottage” is vintage Stevenson and lovely to read. I’m looking forward to continuing with the Dering family in the next two books in the series. B