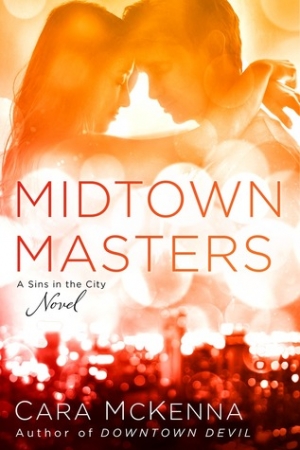 I enjoyed Crosstown Crush and liked Downtown Devil, the first two books in your Sins in the City series and I’d seen some early buzz about Midtown Masters – intriguingly, the blurb was extremely vague. The books in the series don’t share any characters. Rather, they share a theme – menage but not in the usual way. I like the exploration of different types of relationship models. Each book has a definite HEA but it’s not necessarily textbook either.

Midtown Masters starts off with a couple of best friends, Suzy Park and and Meyer Cohen, doing web-camming for money. They had tried the boyfriend/girlfriend thing but it wasn’t exciting enough for either of the kinksters, so they decided to do a bit of camming to spice things up. Eventually, they decided their romantic connection wasn’t going to last but the sex was fun and the camming was taking off. They committed to a year of monogamy and started to provide live-stream content at a high price point to a fairly exclusive list of clientele.

One of those clients is “Lindsay”.

I understand why the blurb is so vague by the way – it’s hard to talk about the book any further than that without giving away spoilers, depending on one’s view of such things. Given that the reveal is early in the book, I’m going to dive in and say Lindsay is assumed by both Suzy and Meyer to be a woman. However, Lindsay turns out to be John Lindsay, a best-selling crime fiction writer who initially sought out the services of “Mr and Mrs Parks” to improve the quality of the few sex scenes in his novels (after some lambasting in reviews). Once John saw the first live show, he came back for more for other reasons.

Over the course of the book, John, Suzy and Meyer develop a real life relationship. John is a near-virgin; he had one sexual encounter of dubious consent (his consent, not hers is in question) and nothing since. He is 37 years old and a shy introvert.

Meyer is bisexual and the big minus in Suzy’s and his agreement to be monogamous for a year so they could go condom free for the camera, is that he has been without dick. Many bisexuals are happily monogamous but Meyer is someone who craves sexual variety. Suzy was never going to be enough for him – that’s part of the reason why their romantic relationship didn’t work out. Suzy is also quite kinky but she’s starting to think that, with the right person, a monogamous commitment is doable. She craves romance and an emotional connection, as well as hot sex.

Suzy is also a trained psychologist. She is considering post-graduate studies in sex therapy but so far has not put her degree to much use.

All of these factors combine to make Midtown Masters a very cerebral book. There’s a lot of talking. A LOT.

“And that’s why you chose your field?”

“Partly. One part of it is because I’ve always had this hole inside me, this sensation that my parents and I have been strangers my entire life.”

“They came from such a different culture, and they never talked about their feelings, or even their lives from before I came along. Not much, anyway. They were—and my mom still is—very un-emotive. So wanting to understand them was part of it, and my own oversupply of emotions and how to deal with them was the other. It was like I was feeling enough for the three of us, almost, when I was younger.”

“Once I learned to step back from my feelings a little, to examine them, detach them from my reactions . . . All those thoughts and feelings became fascinating to me, in a whole new way. I got interested in the connection between feelings and physical sensations, and what happens in your head between the moment someone hurts you and the moment your fist flies at their face—or you run away and cry, or eat a whole sheet cake, or get drunk, or yell at your kid. I want to help people like me—hyper-feelers—hit pause and sit in that uncomfortable space between the stimulus and the response, and learn to choose what comes next.”

Normally, I love lots of dialogue in a book. But for me, much of it was too much into the navel-gazing territory and I got tired of it. It felt repetitive – like the characters were covering the same ground over and again and they were talking their feelings to death. I was being told what was happening internally rather than being shown and that bothered me. While I could see that the conversations represented could well be entirely realistic given who the characters were, I felt distanced from the actual romance.

In the interests of showing readers what I mean by the navel-gazing, I’m going to post a few quotes and let them speak for themselves. They didn’t do much for me but I might be an outlier. (It’s not as if it hasn’t happened before.) No doubt there will be DA readers for whom Midtown Masters will be a breath of fresh air.

“I don’t consider myself either of those things,” John said as they turned onto Fifth Avenue, “but I think you’ve helped me in some way. Or opened something up in me that I didn’t know was there, at least.”

“Maybe I’ve just given you an opportunity to talk about it all.” She squeezed his hand, and he squeezed back.

“Undoubtedly. There’s no one else in the world I could talk to the way I talk to you. I’d thought maybe it was because we were strangers, and it was anonymous. But then I managed it with the camera on, and on the phone. Now in person.”

“My teenage self would’ve wanted to spend the next week obsessively unpacking it all and trying to understand it, but I’m happy to simply conclude that we have some kind of natural bond and leave it at that.”

“I wouldn’t have thought I was capable of whatever this bond is before we met, so thank you.”

“Maybe it’s because we met in such an impolite way,” she teased. “We met with our most vulnerable parts exposed, and when that goes well, I think it’s our instinct to embrace that trust. That, or to panic and run for the hills.”

“Okay. So there was last night. Then there was this outing. Where does that leave us, as far and kissing good-bye goes?”

“There’s no hard-and-fast answer to that. I wouldn’t have been offended either way . . . I think if you’d gone in for a kiss just now I’d have been a little surprised, even if you weren’t as shy as you are. Not offended, and not disappointed. But surprised.”

“Okay. That’s good to know. I had a feeling it wasn’t quite right. Nice to hear I have some kind of intuition.”

“If we’d gone on more dates or were getting serious, and we were more lovers than we were friends, it’d be a different story. Jeez, you know, it’s weird. I mean, our relationship’s almost completely sexual, despite the fact that we never touched until last night. But the friendship we’ve got going here is so intense, it almost trumps how we met, and what went on last night.” She sighed, squinting through the windshield, thinking. “So to answer your question, I clearly don’t really know, but yes, your instinct squares with mine.” A smile warmed her expression as she turned to meet his eyes once more. “But as the topic’s been broached . . . You could kiss me now, if you wanted. If your intuition’s on board.”

“Not to sound weird or patronizing,” she said, “but how’ve you been, since it all went down? Not traumatized, I hope?”

“Not at all. I, um . . . I don’t know exactly how to say it without sounding like an idiot, but I feel rather . . . transformed. Awakened, silly as that sounds.”

“None whatsoever. I’m actually rather proud of myself, for just letting go and getting swept up in everything. I’m not the sort of man who’s typically ripe for sweeping, so . . .”

She laughed, the sound like bells. “Happy to have done some of that sweeping, then.”

To add to that, John’s career was discussed quite a bit and it often felt a bit too meta for me. Maybe it wouldn’t have bothered me in a different book but it was just one more thing for me here.

In the end, I didn’t connect sufficiently with any of the main characters to really enjoy the story and I struggled to finish the book. I was uncomfortable with the unevenness in the relationships – John was most often supplicant, student or wallflower and I never felt that he’d come into his own and could stand solidly as equal with either Suzy or Meyer, either separately or together.

The relationship model wasn’t an issue for me. I’m happy to see genre romance branching out to explore other kinds of relationships. I don’t want to say too much about how things work out but those who have read the earlier books in the series will see some familiarity. I’m delighted that non-traditional relationships are getting some mainstream release. I liked how sex-positive the book was. But this one didn’t really work for me I’m afraid.