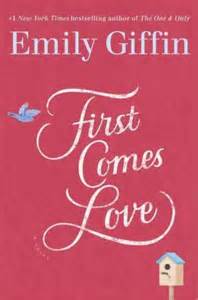 Back in the day, I really loved your first two books, Something Borrowed and Something Blue, and also liked the next two, Baby Proof and Love the One You’re With. I’m not sure why I stopped reading your books after that, except that I felt like perhaps they were moving from chick lit to women’s fiction, which is a distinction I mostly make by the age and marital status of the main characters. It’s not that one genre is better than the other; it’s just that I have a bit of a block about women’s fiction (though usually when I read it I like it fine). I think it comes from being a romance reader at heart and wanting the thrill of a new romance and the promise of an HEA, rather than the quieter and more ambivalent conflicts of women’s fiction.

Anyway, I’m also not sure what prompted me to request First Comes Love; from the description it sounded more women’s fiction-y than most: two sisters in their late 30s confront mutual and and separate challenges in their personal lives.

Set in Atlanta, First Comes Love focuses on Josie and Meredith as the 15th anniversary of their beloved brother Daniel’s death approaches. Daniel was the oldest, a medical student and golden boy who died in a car crash. His death splintered the family; their alcoholic father went off the rails and their parents eventually divorced. Josie and Meredith’s relationship, always contentious, worsened without Daniel’s steadying presence. Now both of the sisters are at a crossroads as old secrets brew and new opportunities arise.

Josie is 38, an elementary school teacher, and a middle child with the opposite of middle-child-syndrome. Daniel and Meredith were always the sober, responsible ones; Josie was the drama queen, exuberant and flaky. She hasn’t changed much over the years, to Meredith’s frequent chagrin. In spite of her wild child ways, all Josie has ever really wanted is to get married and have children. Now she’s facing a new school year and having her ex-fiance’s daughter in her class, just as she starts to wonder if she should give up on love entirely and consider single parenthood instead.

Meanwhile, Meredith is grappling with dissatisfaction on several fronts in her life. After Daniel died Meredith gave up her dreams of being an actress in New York and went to law school instead. She married Nolan, who was one of Daniel’s best friends, and now has a four-year-old daughter, Harper. While she loves Harper with all her heart, Meredith is starting to feel like the life she’s living is a mistake – wrong job, wrong husband – she feels trapped by her choices and increasingly wants to escape.

Josie and Meredith have always had a rocky relationship. They were close growing up, but perhaps it was a closeness mostly brought on by being two years apart in age and by physical proximity. Now they mostly seem to share history; their parents and their memories of Daniel tie them together. Josie relies on Meredith as a sounding board, albeit a disapproving one. Meredith seems to mostly view Josie as someone she can judge and feel superior to.

As someone with a sister,  I could definitely relate at times to the siblings’ fraught relationship. But while I felt that the characterizations were supposed to be somewhat balanced, and the reader was perhaps to understand where both Josie and Meredith were coming from, that wasn’t the case for me. Sure Josie was flighty and a little self-centered. No, she wasn’t the most emotionally mature 38-year-old out there. But Meredith was in another category. Sour, angry, judgmental, and martyrish, Meredith was one of the most unpleasant protagonists I’ve come across in a while.

It doesn’t help that most of Meredith’s interactions in the book are with Josie and Nolan, the two people she seems to resent and, honestly, dislike the most. Late in the book the two are talking and Josie opines that, “Mere’s been in a bad mood since she came out of the womb.” Nolan, who seems generally loving and supportive of his wife, even if the sentiment is not returned, agrees. So it’s not just that she struck me as particularly unpleasant; even people that love her and tolerate her foibles acknowledge that she’s kind of permanently dissatisfied.

Anyway, I wouldn’t say that the imbalance really negatively affected my enjoyment of the book too much, except I probably would’ve liked to have Meredith get told off more than she ever actually does. It was more just odd to me because I wondered if it was *me* who just had a uniquely negative reaction to Meredith, and maybe some other readers would find Josie harder to take. In real life, I’d say I have qualities in common with both Meredith and Josie, and I’m equally intolerant of flakiness and excessive negativity. So I don’t think it was a personal thing.

(And weirdly, it made me think of Something Borrowed, and the relationship between Rachel and Darcy. In that book, told solely from Rachel’s perspective, she’s the uptight responsible one, but she’s a good friend and a good person, albeit one who sleeps with her best friend’s fiance. Darcy is charismatic and self-centered, a bit like Josie, but kind of a monster underneath – until she’s redeemed in her own book! It just intrigued me to see that a sympathetic first-person perspective makes a difference in how you view characters.)

As I said, in spite of my confusion about whether I was supposed to find Meredith and Josie equally sympathetic/aggravating, I actually did enjoy First Comes Love quite a bit. The writing is smooth and the story moves along at a nice clip. Also, and maybe this is a function of it not being romance – I really didn’t know what was going to happen in the end. Was Meredith going to dump Nolan? Was Josie going to go forward with her artificial insemination, and if so, with who? She has a sort of stealth romantic prospect that pops up but I kept expecting things to go in a different direction, but they didn’t, or at least not quite the way I expected them to. I really liked that the book surprised me and kept me wondering until the end.

One criticism – I wish Daniel had come alive somehow more in the story. He’s so at the center of things – the story begins with the girls’ mother thinking that the three of them should mark the anniversary with a trip to New York to visit Daniel’s old girlfriend, and as the book goes on a secret that Josie has regarding Daniel’s death starts to weigh more and more on her. His absence has a huge effect on most of the characters, but he never really felt real to me – perhaps because he felt a bit too idealized? To be fair, it’s perfectly natural that everyone who loved Daniel would idealize him after his young and tragic death; it was just that he lacked the depth and nuance that made him feel like a real character and thus made his loss feel like something the characters were actually dealing with.

In keeping with the genre, the story ends with a happily-ever-after-for-now; in other words, everyone is a bit better off than they started (though with Meredith we’re really grading on a curve; she was so miserable and unpleasant for most of the book that her efforts in the end to be less miserable and unpleasant, however incremental, felt like a victory). Anyway, my grade for First Comes Love is a solid B+, and I won’t wait so long again to pick up another Emily Giffin novel.