REVIEW: The Golem and the Jinni by Helene Wecker 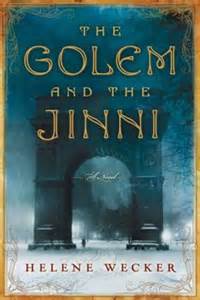 In The Golem and the Jinni, a chance meeting between mythical beings takes readers on a dazzling journey through cultures in turn-of-the-century New York.

Chava is a golem, a creature made of clay, brought to life to by a disgraced rabbi who dabbles in dark Kabbalistic magic and dies at sea on the voyage from Poland. Chava is unmoored and adrift as the ship arrives in New York harbor in 1899.

Ahmad is a jinni, a being of fire born in the ancient Syrian desert, trapped in an old copper flask, and released in New York City, though still not entirely free

Ahmad and Chava become unlikely friends and soul mates with a mystical connection. Marvelous and compulsively readable, Helene Wecker’s debut novel The Golem and the Jinni weaves strands of Yiddish and Middle Eastern literature, historical fiction and magical fable, into a wondrously inventive and unforgettable tale.

The decision to try this book came about in a way that often catches me. It just seemed “different.” When faced with such a book, I’m often like a child who sees a something unknown and just has to pick it up and look at it closer. Sometimes it pays off with a wonderful discovery and other times it won’t. Here the payoff is thoughtful, mesmerizing book with intriguing characters, situations and a hopeful but by no means certain happiness for some.

I first saw the book at Amazon from their “people who…”. The cover – oh yes, I’m fickle for cover art too – made me look twice, the title made me click on it to discover more and the blurb, well that was the “different” that made me decide to buy it. While I don’t often read fantasy novels, I do like them and this one promised not only a jinni but a golem as well. Not your ordinary vampire, shifter or zombie fantasy novel here. And along with the unusual characters there’s turn of the twentieth century NYC for the same admission price. How could I resist?

The setting is a trip back in time and makes me glad to I had just finished watching the early episodes of Ric Burn’s documentary about New York City as that allowed me to much more easily “see” the places and things described, especially the angel fountain and the crowded tenements of the immigrant lower east side. I love it when things come together that way. The story is a lovely view of two immigrant communities. While it’s not always complimentary, it’s always sympathetic. I also agree with the view point that many of the issues covered here are relevant today – the clash of cultures, languages and traditions still being brought to this country 110 years later.

The Golem and the Jinni are fascinating creations. They’re opposites and yet the same. They have so many similarities but also differences. She is earth – solid, dependable and more comfortable being told what to do. He’s fire – fickle, fleeting, free spirited and damn the consequences. He’s appalled at being confined while she’s horrified at being rootless. On the other hand, they’re both “not human” and can see the truth of the other allowing each the luxury of being exactly who and what they are. They manage to understand each other as no human could ever know them. They are beings bound to another’s will who find freedom. Born of the old world, they come to the new and reinvent themselves. And yes to all the comparisons to immigrants.

The plot is one that kept me guessing and believe me, this is a good thing. Its intricacies take quite a while to unfold and take shape. At first I wasn’t sure who all these secondary characters were and how on earth their backstories would be relevant for the Golem or the Jinni. But in the end, everything is knit together and the tapestry of the story is completed. Oh dear, that’s a mixed metaphor.

The pathway to the denouement is a twisty one which must have taken a good deal of time to imagine and then wrestle under control. I do love when a plot leaves me guessing and interested.

But is there a romance?, I can hear readers asking. Well, in a way. Each is the one the other thinks of when times get tough. She gets him to see and accept his responsibility for his actions while he gets her to loosen up, find some joy in life and be willing to take a few chances. In the end, as the Golem thinks, they’ll have to work at a relationship, carve one out that will fit and suit only them. Can they do it? I think yes. They’re both strong but still flexible and as they continue to make and remake their lives, I think they will find a place just for them. B