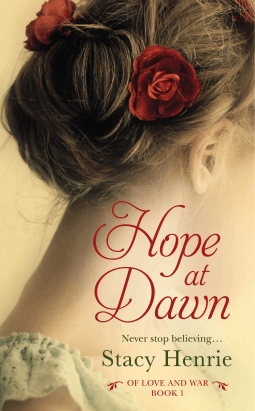 With her brothers away fighting the Great War overseas, Livy Campbell desperately wants to help her family. Her chance comes when she meets a handsome stranger who lands her a job as a teacher in a place far from her parents’ farm. But the war casts a long shadow over the German-American town that Livy now calls home-and the darkness will test everything she thought she knew about family and love . . .

More than anything, Friedrick Wagner wants to be part of his adopted country’s struggle for peace. But when the bitter animosity between Germans and Americans soon turns citizens against newcomers, friend against friend, he will do whatever it takes to protect Livy from the hysteria that grips their town. As tragedy-and dark secrets from the past-threaten their future, Friedrick and Livy have one chance to stand up for what’s right . . . and one chance to fight for their love.

I’m always looking for unusual settings or plots and the description of this one promised both. Plus it utilizes an Americana backdrop that I haven’t seen used much in years.

Livy is a strong yet still uncertain heroine. She’s young – just turned twenty in the opening scene – and has only been away from her parent’s rural Iowa farm for one year of college before she was needed back after her two older brothers enlisted in the Army. Her beau came back from France wounded in body and soul and has now turned to drink. Livy, however, isn’t some martyr and when Robert doesn’t show for a local dance one evening, she takes up the offer to foxtrot with a handsome stranger then flirts a little. She also jumps at the chance of a teaching job Handsome Stranger tells her about.

It was wonderful to see how supportive Livy’s family is of her hopes and ambitions to strike out on her own, hold down a job and be productive. Livy’s a hard worker, patriotic and determined to do her best by her new pupils. What truly delights me about her is that she doesn’t happily skip down the road of martyrdom. When Robert goes over the line, she cuts bait and tells him so in no uncertain terms.

Friedrick is also patriotic though he’s had to already prove himself even before the local vigilante arrives one night demanding that the Wagners buy another war bond with what little ready cash they have left. Anti-German sentiments have swept through their small town and there is little more that American born Friedrick and the others can do to prove themselves loyal to their country. Friedrick is sick and tired of the comments and suspicion German American families are subjected to and himself in particular since he has a farm deferment from enlisting due to his father’s bad health.

When Livy and Friedrick meet again, their initial attraction yields to sparks of conflict that isn’t manufactured nor inflamed for the story. I could see the point of view of each of them. Livy has brothers in the line of fire in France and hasn’t been around any German Americans before this. She’s a little young and naïve but I thought that was to be expected given her background. But she is open to new experiences and willing to change her opinion based on what she sees and the people she meets. Friedrick jumps to a few conclusions about Livy before coming to the realization that she isn’t going to condemn him out of hand and is willing to accept his offer of a truce between them. I was glad to not see them holding grudges just for the sake of doing so.

I thought the story had good historical details in showing the life of rural Iowa farm towns and one room schools. It also taught me a great deal of history I didn’t know such as the banning of the use of all foreign languages in Iowa and how pervasive anti-German sentiments were. I was sorry to see the villains mainly portrayed as fairly stock characters who show up, threaten the good guys and then sink back into the wood work until needed again for more menace.

But what about the religious aspects? I can hear long time DA readers asking. Will I feel preached at or badgered about faith? Honestly, I don’t think so. I know I didn’t. Instead, faith is an integral part of Livy and Friedrick’s lives. Going to church is the accepted thing to do on Sunday and they turn to God in times of need and in thanks for prayers answered. I didn’t feel bashed over the head with religion but it is present throughout the story.

The main characters are well fleshed out and believable, the conflict is germane to the time and place and it’s nice to learn some new things along the way. If not for the by-the-rote villains, I think I would have enjoyed the story more but I’m still glad I read it. B