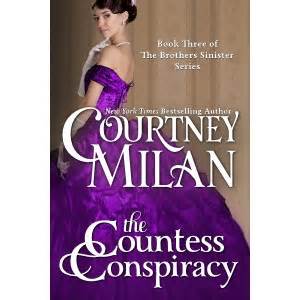 I believe I’m not alone in being in a serious historical romance funk. Among the readers I talk to, it seems that many of us who have been primarily historical romance fans for years are finding it hard to get excited about the current crop of books. That this malaise is shared by others suggests that the problem is not with the readers, but with the reading material. But I don’t know that this is necessarily true, at least for me, because even when I read what objectively (well, as objectively as a subjective judgement can be) is a perfectly fine historical romance, like The Countess Conspiracy, I remain somewhat unmoved.

Sebastian Malheur and Violet Waterfield have been friends forever, and co-conspirators of a sort for the past several years. They grew up together, and Sebastian stood by Violet during her difficult marriage (which ended with her husband’s death in a fall). Now he’s doing even more for her: for several years now he’s been pretending that Violet’s scientific discoveries are his own. He publishes papers and gives lectures on them, neither of which Violet can do. For one thing, her early attempts to submit her findings on plant reproduction* to scholarly publications were utterly ignored because she’s female. Even if she were to find someone who would publish her work, she would be subject to social approbation, something her very proper mother has drilled into her as a fate worse than death.

* Though it’s not presented in a particularly complex manner, I’m not going to even try to explain too much the nature of Violet’s work, for fear of getting something wrong.

It’s the subject matter of Violet’s research that makes it especially scandalous – her breeding and cross-breeding of various plant species is a shocking topic for delicate Victorian ears and eyes, with its vague but undeniable connection to S-E-X. It’s shocking when Sebastian delivers the lectures, too, but he’s a man, and a charming, rakish one at that, so the shock is more of the salacious “ooh!” variety. Still, Sebastian does receive some social disapproval, and it’s starting to wear on him. Even more wearing is the knowledge that he’s living a lie; he feels like a fraud, and it’s turning his naturally sunny disposition darker.

Sebastian has been in love with Violet for as long as he can remember. She’s a few years older than him, and he trailed after her as a child and then later included her in the “club” he has with his two best friends from school, Robert and Oliver. This detail felt a little false; a woman being included in a social quartet with three men she’s neither married nor related to, in Victorian times, seemed unlikely. But I guess it’s meant to show that Sebastian insists that Violet be included in everything, up to and including Oliver’s bachelor party,  because he adores Violet.

Both Sebastian and Violet have family baggage to deal with, in addition to their own fraught relationship. In Sebastian’s case, his carefree, happy and easy existence is upended by conflict with his older brother (in addition to his angst over the charade with Violet). Benedict is dying of some sort of unspecified heart ailment, and Sebastian is troubled to realize that Benedict doesn’t want to give guardianship of his only  son to his younger brother, preferring a more distant but upright relative. This leads to several discussions between the brothers which cause Sebastian to realize that Benedict has no respect for him, in spite of Sebastian’s supposed scientific accomplishments. Sebastian’s attempts to prove Benedict wrong only make things worse. This conflict was well-done – it felt real and I could understand the difficulty from both POVs; the brothers are just very different in a way that’s pretty much guaranteed to cause resentment.

Violet’s issues are more serious. Her father killed himself, a scandal that had to be hushed up and denied, and which lead to Violet’s mother instituting some very rigid rules for her daughters regarding proper deportment. Violet’s sister Lily takes to the rules with enthusiasm, marrying (happily) and producing an endless stream of children, and generally cleaving to the conventional model of Victorian womanhood with gusto. Violet loves her sister but is jealous of her in some respects; she feels that her only value to Lily is as a helper and fixer when things go wrong.

Her relationship with her mother is even more difficult; Violet resents the rigidity with which she was raised, especially after her father’s death. Though she follows her mother’s rules, she’s keenly aware of how they circumscribed her life during her marriage and how they continue to do so in the present. Further, she is sure that if her mother knew her secret she would turn on her without a second thought. Violet does not feel unconditionally loved by either her mother or her sister; there are rules and regulations attached to their continued approval and support.

It takes Violet a while to realize that this is not the case with Sebastian, and if I had any issue with her, that was it. She really does take him for granted. There’s a closed-off part of her that refuses to acknowledge what’s between them and what could be between them (there are reasons for that, but they aren’t explained for a while and by the time they were I was a bit frustrated with Violet). Also, Violet is portrayed as something of an absent-minded genius, one who isn’t even aware of her surroundings when she really gets going with her work. The latter depiction is a common one for scientists in fiction, and it may even have the ring of truth, but it sort of bugs me. I think it’s often played too broadly, or, as here, used to excuse someone being a bit of an insensitive ass.

Before I learned the deep, dark secret of Violet’s unhappy marriage (which was a bit different than what I’d expected), I also got a little tired of Violet’s interior monologue, which was all about how unlovable she was and how she drove everyone away eventually. Actually, even after Violet’s secrets are revealed, I’m not quite entirely sure how the pieces fit together to make her so self-loathing. I had to chalk it up to Violet’s pain over never really feeling like she could be her true self with the world. (Though in that, I’m not sure she was so unusual for her time and place.)

There’s plenty to like in The Countess Conspiracy. The writing is good. I liked Violet. I liked Sebastian. I liked the (somewhat unusual) role reversal, where he’s the charming, flighty one hiding an unrequited love, and she’s the dark and angsty genius. Still, it added up to a bit less than the sum of its parts for me, and I’m not sure why. Since I can’t find much fault with the book (well, I have found fault, but it’s all minor stuff in the larger scheme of things), I have to conclude that it’s part and parcel with my general historical romance malaise. Sigh.

My grade for The Countess Conspiracy is a straight B.