REVIEW: The Waters of Eternity by Howard Andrew Jones 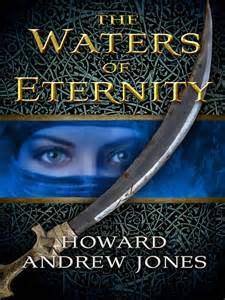 Venture into the time of the Arabian Nights with stalwart Captain Asim and the brilliant Dabir as they hunt an unseen killer that craves only the eyes of his victims, and pursue a dark entity haunting the halls of an opulent mansion. Ride with them on a desperate journey to preserve a terrible weapon from Byzantine agents, and seek the waters of eternity to save a dying girl’s life. In six tales brimming with mystery and sword-slinging action Dabir and Asim stride forward into adventure. With nothing to shield them but Asim’s sword arm and Dabir’s wit, the two heroes must unravel sinister puzzles, confront dark wizards, rescue fair maidens, and battle the terrifying monsters of legend.

I was doing some ebook shopping at Kobo when your books appeared in the “suggestions for you” slideshow.” Ever since I’d enjoyed Janine Ashbless’ “Heart of Flame,” I’ve been looking for more “Arabian Nights” style stories. Hmmm, I thought. These look interesting and could be something I’d like. But since I’ve been burned before when diving into unknown-to-me authors, I decided to try this collection of short stories first.

What an engaging voice you’ve given to Asim. From the start I know I’m in good story-telling hands with someone who has the pacing, descriptions and ability to deliver a rousing finish. These are well rounded characters with consistent traits, habits, likes and irritations rather than cardboard backdrops for the fantasy world you’ve created. Readers seeking different settings, times and something other than vampires/weres/fairies, European settings and Christian characters need look no further.

Asim and Dabir’s adventures are short, sweet and to the point – nice bite sized stories that can fit into any available reading time. Only one felt somewhat incomplete to me – the first one with ghul where they ended the story unsure of what had caused the ghul to change and attack. The rest are complete, well told, with good pacing, explanation and resolution.

The creatures are ghastly fun – especially the last one which made me think of the old Italian swords/sandals Hercules movies. I like that they don’t always behave according to legend and that some might appear to be one thing but then in the final denouement, become/behave/resolve another way. It kept me on my reading toes until the finale.

The relationship between Dabir and Asim is wonderful. They’re obviously long time friends – Asim knows not to interrupt Dabir while he’s thinking and, when sent to interview people, to ask lots of questions and remember the suspects’ actions/looks/demeanor as well as the answers they give. They know each others strengths and weaknesses – Dabir = brains, Asim = brawn, and work together well as a team. They’re a middle eastern bromance.

The story collection is a great mix of fantasy, swashbuckling, friendship and humor. The story of who was trying to kill the cocky playboy had me in stitches. But I also like that much of what actually solves the mysteries is deduction and reasoning. I’m now sold on Dabir and Asim and looking forward to reading two full length novels. B

→ Jayne
Previous article: REVIEW: The Hidden Law by Michael Nava
Next Post: Does what you paid for a book affect how you’d rate it?