REVIEW: My Name is Resolute by Nancy E Turner 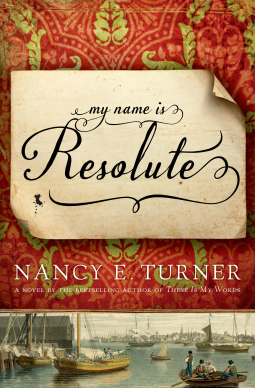 The year is 1729, and Resolute Talbot and her siblings are captured by pirates, taken from their family in Jamaica, and brought to the New World. Resolute and her sister are sold into slavery in colonial New England and taught the trade of spinning and weaving. When Resolute finds herself alone in Lexington, Massachusetts, she struggles to find her way in a society that is quick to judge a young woman without a family. As the seeds of rebellion against England grow, Resolute is torn between following the rules and breaking free. Resolute’s talent at the loom places her at the center of an incredible web of secrecy that helped drive the American Revolution.

This book is a long saga. Which is not my favorite type of story but I knew going in that the book covered decades and it was my own choice to begin it. Several people I know have read and loved your previous books which made me want to try one. I love this time in history and hoped that the momentous events covered would make up for my personal bias against long books.

The beginning third is riveting. Ressie’s ten year old self is honest about what she sees and experiences though not with understanding beyond her age. She truly doesn’t know what her sister saves her from nor what Patience – Patey – endures for a few crusts of bread to keep the sisters alive on the pirate boat. In Resolute’s journey away from Jamaica and to the American Colonies, we see the resilience of children and how she learns to adapt to being a captive.

Ressie’s life as an indentured servant – or slave as some see fit to think her – was eye opening. Here is a hard life in the raw with the easy possibility of death at any moment, which is a theme throughout the book. Her capture by Abenaki Indians, travel to Montreal and years spent in a Ursuline convent there opens a whole chapter of history in the Americas of which I had no knowledge. These are the events that seal in Resolute the dyed in the wool desire for freedom, for liberty and to never be a captive again.

I also enjoyed the next period in Resolute’s life when she reentered English society and found her calling in life – that of weaving. As a woman alone, she has few ways to make an honest and honorable living but with the beautiful cloth she weaves, she can maintain her independence. When a handsome young man comes into her life, she finds her lifelong love, even if they do spark and argue at times.

Then the boring middle section began. Boring. Boring, The battles of the French and Indian Wars are raging yet what we see is Ressie getting (understandably) angry at the pettiness of a forgettable character then being taken to trial and facing her punishment. Beyond showing the justice of the day, the only other purpose that I can see is it sets up the teeth gnashing villains.

Once Ressie’s men are back from the war, we enter a new period in her, and their – life. Britain needed money to pay for the recent war and began to tax just about everything except breathing. Seeing the many and various ways that the taxes ruined honest tradesmen and brought others nearly to their knees trying to pay what the Crown demanded, I could see the rise in resentment and need of people to resort to any means they could just to survive. Of course, Ressie’s husband and privateer brother are soon in the thick of plotting and scheming ways to evade the new taxes and raise the spirit of rebellion.

I have to say that honestly sometimes Ressie is thick as a brick. She can keep her own secrets and has elaborate signals worked out yet when confronted with her husband and brother’s involvement in the little acts of rebellion against the Crown during the 1760s, she acts like subterfuge is totally beyond her ability to understand and has to have things explained. It might be an authorial instrument to explain the ways the Sons of Liberty passed on information but it makes Resolute look like an idiot.

As the book went on there was death. Lots of death. Well, that’s true to the times but saddening none the less, especially the degree of it. I’ve realized that while I want historic authenticity, I don’t want such a large number of the characters I come to know in a book to die and double that feeling if the deaths start to feel like events just tossed into the story for no other reason than to allow Resolute to wallow in grief some more or, worse still, mentioned in passing as if they are of almost no importance.

Inserting fictional characters among historical ones has to be done carefully for me to believe it. Unfortunately here some people, such as General Washington, are stuck into a scene in a way that seems merely as if to say, “See, here are real person randomly stuck into the story just because.”

I hope that some typos are fixed. More than once each King George (I, II, and III) is referred to as King Charles. But I did learn the difference between the Battle of Preston and Prestonpans. There are also moments of overwrought melodrama plus, as mentioned earlier, three characters who are naught but black villains with no shades of gray. They got very tiresome.

I wish the book had managed to maintain its strong beginning. The setting is interesting, the plot taught me new things about Colonial America and I had high hopes for it. But instead it slowed to molasses in places, depressed me with the sheer number of people who died and ended with more of a whimper than a bang. It also confirms for me the fact that most long sagas are probably books I should avoid from now on. C-