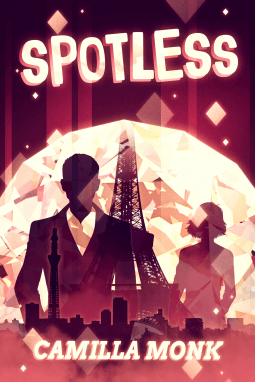 Island Chaptal—nerdy IT engineer by day, romance novel junkie by night—just walked into her messy New York apartment to find Mr. Right waiting for her. No, wait…Mr. Clean.

A gentleman professional killer with a bad case of OCD and zero tolerance for unsorted laundry, March isn’t there to kill her…yet. He wants the diamond her late mother stole for a sinister criminal organization. Island agrees to help him find it, facing the kind of adversaries who dismember first and ask questions later. Good thing she’s got March to show her the ropes. And the guns. And the knives.

The buttoned-up Island is soon having a blast racing from Paris to Tokyo following the clues in her mother’s will, and for the first time, she’s ready to get close to someone. But falling for a hit man may be the very definition of loving dangerously…

The description of a hit man with OCD grabbed me. I mean really, except for the fact that March’s so good at what he does, I’d say he’s in the wrong profession. Bet his cleanups are a nightmare – or does he always use a cleanup crew? Anyway, I decided I had to give this book a go.

The hilarious chapter headers – which I enjoyed as much as the rest of the book – set the tone of the book as one of over the top camp and a loving spoof of and homage to romantic suspense novels. I do hope the image presented of Island, as a woman who loves romance novels but who also reads them as a substitution for having no love life, is a spoof too. I seriously loved the snark but I think that’s because Island turns it on herself as much as anyone else. And she also manages to actually get some agency through it rather than just sounding obnoxious which frequency happens with this style of humor.

But instead of going only for humor there’s some Deeper Issues going on here as well. Island is getting “hit” – sorry, couldn’t resist – with a lot of things. Being assaulted in her apartment, kidnapped, almost tortured … all bad things. But what is hitting her hardest is the knowledge that not only did she not really know her mother but also that her father has kept her mother’s memory hidden from her for all these years and that Island herself never pushed for anything more from her father about her mother.

Just as in a RS book, there is the initially clueless and naïve heroine who becomes caught up in a race against villains with a super badass hero complete with even badder weaponry. Only the hero here is straight out of the Anne Stuart “Is-He-Evil-or-Good” Collection. There’s also an endless supply of private planes to jet them around the world and Lexuses, Mercedes and Audis – most left in a condition that would not entitle a refund of your insurance money at any car rental place. Oh and the relentless pace of the first three days is of the style which manages to cram 36 hours worth of events into a 24 hour day. At least March admits to needing lots of coffee and amphetamines to stay awake.

Does it make sense for Island to go along with March and his mission? Strangely it actually does. She’s had a hint of the worse evil henchmen who are out there after her and if she helps March, it just might get them and their evil boss off her back. Also Island realizes she’s a special type of client to March – the type he doesn’t always tie up and put in the trunk – that much. The violence level is high – both on and off screen with March and Associates leaving a trail of bodies a mile wide plus an almost torture scene involving the heroine and a villain who makes March look like a choir boy.

Does the romance match the suspense? At first March is questionably good in that he’s not as bad as the villain who is clearly insane and he protects Island even if only to keep her alive to cough up the diamond. Then some interesting hints get dropped by March that he knows Island from previous encounters, some candid advice is given to Island by a woman who ought to be able to knowingly do so, Island seems to be getting better at reading March’s changing facial expressions and she has some are-they-real-or-are-they-Memorex flashbacks which really get intriguing. Slowly March seems to be relaxing his guard of her and around her plus letting her begin to see beneath the “onion layers” Island sees him wrapped in.

But is he really a good guy who kills people for a living and has angst or is he just plain old bad? Of course we know the answer to this as this is marketed as a romance. I also noted the slight leeway and cover that March is given (by the CIA) if he’s willing to take a few dirty jobs. For me he gets redeemed enough that by the end, I’m almost rooting for him more than Island. Island subtly does a few things to get March to reveal more about himself so as to know him better. Their dinner is a breakthrough though and the topics interesting enough I would love to have been on a double date with them and able to join in.

The end is way OTT but that’s just as a spoof should be. The heroine gets kidnapped – again!? Yes. There’s a Blofield villain lair with tons of minions with guns who will die? Yes. Is a devastating secret revealed? Yes. Does our Hero walk into the lair alone and get frisked for weapons? Yes. Did that help villain? No. A surprise person arrives? Just in time. Exposition galore? Oh, yes. Final showdown complete with honor on one side and none on the other. Yep. Heroine has her silly moments in all this and screams a lot? Yepper. Dramatic finale? Mmm hmmm. At least Island realizes they both acted like idiots before she remembers something and saves the day. Before one last – just had to get that in – revelation.

Now for the ending of the romance section. Oh, yeah, that’s separate from the thriller/suspense stuff. I will admit to some disappointment but given all the angst and emotional trauma whizzing around, I’m not surprised. Plus, was there a touch of Stockholm Syndrome thrown in for free? I think there was. The very last part? That’s just weird.

I gotta agree with some reviewers that Lea made things way too complicated and the ending dragged on too much. But then it would be hard to sustain the initial rush of the book. I am on board for the sequel though and give this one a thumbs up for sheer entertainment value alone. Plus the chapter headings – I can’t say enough about how funny those are. B