REVIEW: A Touch of Camelot by Delynn Royer 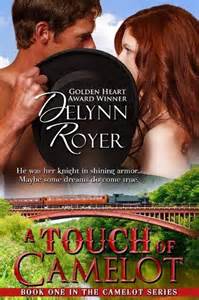 Set in Kansas, Virginia City, and San Francisco, 1879.
Guinevere Pierce was raised at the knee of one of the slickest con artists in the West, but can she con her way out of this one?

When Gwin and her kid brother Arthur become witnesses to murder and then targets themselves, there’s no time for games. There’s only time to run.

Cole Shepherd is a new Pinkerton detective. His first assignment? To escort the beautiful and deceptive Gwin Pierce and her brother across country to testify.

When Gwin sets eyes on her Pinkerton escort, she’s stunned. Cole’s is the face that has haunted her romantic dreams since she was a girl. He’s her Sir Lancelot, but now he’s her captor. And he’s leading them toward a trap that Gwin must convince him could cost them their lives.

From the Kansas prairie to the sparkling hills of San Francisco, theirs is an attraction they can’t resist. Maybe some dreams do come true.

I was in the mood for something light and historical and remembered enjoying your 1920s novel last year, “It Had to Be You.” “A Touch of Camelot” had been sitting in my library at Smashwords so I queued it up. While it fit the bill for humor, it did have some more serious moments as well.

Gwin and Cole share some history though neither one realizes it for a while after they meet up again some years later. He’s a lawman who has finally achieved his dream of working for the Pinkerton Detective Agency while she and her brother Arthur are dyed in the wool con artists raised in traveling medicine shows. Gwin and Arthur have already led authorities on a merry chase and when Cole gets assigned to take them back from Kansas to California, he’s warned that it might be harder than it initially appears.

This proves to be an understatement as the two siblings are convinced that if they go back to San Francisco, they’ll be dead soon. Cole listens with skepticism to their reasons – after all, Gwin is a consummate liar for a living. He can’t understand why they object to testifying at the trial of the man accused of killing their father and other members of their group but he’s sure as heck not going to mess up his first assignment.

Since they’re traveling by train, there aren’t many chances for the siblings to skip town, as it were, but Gwin makes the most of their opportunities. The cat and mouse game between the lawman and the liar keeps both on their toes even as a grudging admiration develops between them. Along with some mental lusting that doesn’t get too out of hand.

Something happens to change Cole’s mind and the conflict that had centered on him and Gwin then shifts to the nebulous and menacing people determined to see the siblings dead. The reader has been clued in to the reason, which thankfully isn’t too far fetched, for a while though the final showdown gets a touch bizarre.

I enjoyed the fact that Gwin has agency despite all the odds stacked against her. She’s smart and will seize any chance no matter how small to make money and escape. Cole might get frustrated with her but he does quickly change his mind about her skills and abilities and treats her as a worthy opponent. The shift to sexy times seemed more plot driven than generic and a few misunderstandings get thrown in and blown out of proportion when needed to draw out the relationship conflict. Still their banter is amusing and well worth the time to read it.

Gwin’s brother Arthur is also a sweetie. He’s whip smart too though not smart aleck. Cole and Arthur soon form a friendship though Cole listens with dismay at how Arthur and Gwin easily chat about all the cons they can pull off and the sometimes precarious nature of their upbringing. I think Cole will be doing some redirecting of Arthur’s intelligence and abilities in the coming years.

As a western rom com, “A Touch of Camelot” hit the spot for me. There are a few bits of seemingly modern vernacular and puzzling issues such as Pullman train cars with no Pullman porters aboard. While the conflict between law and order makes sense and isn’t based on something a quick conversation would fix, at a few points along the way, the romance conflict seemed more manufactured than generic. Nonetheless, I had fun with the fast, relatively angst free story and look forward to seeing Arthur all grown up in his own book. B-