Foxglove Summer, the fifth book in your urban fantasy series, finds the hero of the series, police constable and wizard-in-training Peter Grant, driving out to the countryside to help investigate a missing persons case. 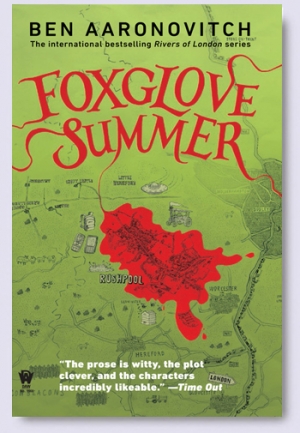 Two eleven year old girls, Hannah Marstowe and Nicole Lacey, have disappeared from the small village of Rushpool. Sent to Herefordshire to see if a retired wizard named Hugh Oswald might have had a hand in the children’s disappearance, Peter quickly clears Hugh and his not-quite-human granddaughter, Melissa, and then volunteers to help out the local police.

Since at first glance it appears to be an ordinary missing persons case—the girls are thought to have run away together—Peter is sent to liaise with / babysit Hannah’s family, in order to free a search-trained officer.

Peter also befriends a local cop named Dominic, so he is on hand when Dominic’s friend Stan (“Short for Samantha”) makes a discovery which may be related to the case. Stan is a drug addict and hides her stash in the woods, yet someone has now stolen it. There are no tracks near the place from where the stash was taken, and Stan’s first thought is an odd one—that a pony got into it.

The find yields no further clues, though, and by day three of the search the local police chiefs are desperate enough to ask Peter to do what they term “a Falcon assessment” on the entire case.

So Peter reads through the police files and learns that the girls’ cell phones were found by the side of the road, both dead, and that a school friend of Nicole and Hannah’s said Nicole had an invisible friend. Peter requests that the phones be looked at under a microscope, and the resulting photos reveal a pattern consistent with degradation caused by proximity to magic.

The investigation is interrupted by the arrival of a certain river goddess. It seems Beverley, on the scene to assist in the investigation, has gotten into a disagreement with a couple of the local rivers. Meanwhile, Leslie also contacts Peter, but it’s unclear what her purpose is in doing so.

Can Peter help sort out the river situation? Who has taken the two girls and why? Do the UFO sightings in the area have anything to do with the case? Will Nicole and Hannah be found? Will the person or entity responsible for the kidnapping be brought to justice?

Your last book, Broken Homes, annoyed the crap out of me for various reasons, chief among them that although I saw it coming, I really, really didn’t want Peter to be betrayed by Leslie. I was disappointed that you would have Leslie do such a trite, predictable thing and with that choice, turn all she’d undergone into a source of angst for Peter.

Thank goodness Foxglove Summer is so much better. I don’t think I can understate how much better.

First, the plot is suspenseful but I never felt the child-in-jeopardy element was used for cheap angst, heartstring-tugging or other reader manipulation. Instead it’s dealt in a matter of fact manner.

Second, unlike Broken Homes, which felt episodic and meandering, this book feels cohesive. Each of the earlier books had at least occasional pacing issues, but I didn’t notice any in Foxglove Summer; it’s consistently engaging and entertaining.

Third, Peter’s trademark wit is in place. I laughed and hooted multiple times. Take this scene, which comes after Molly sends Peter a couple of trunks:

I sighed and asked Dominic to give me a hand.

“Bloody hell,” he said when he tried to lift his end. “How long were you planning to stay?”

“It’s the housekeeper,” I said, “She gets carried away.”

Dominic gave me an odd look.

“Not my housekeeper,” I said as I tried to avoid knocking over a garden gnome. “Our nick has a housekeeper.” Which I decided sounded even weirder.

While there isn’t quite as much detail about architecture or history in this book as in some of the others, we get interesting details about forestry, geology and geography, and these never feel like info dumps but are woven in when they are pertinent.

Almost all of the many new characters introduced in this book are distinctive, amusing or eerie. I especially liked Hugh Oswald and his beekeeping granddaughter Melissa.

And then there is Beverley. I liked her in Midnight Riot / Rivers of London and I like her even better here, where she and Peter both help each other out. I like the way Peter’s relationship with Beverley develops, too. (And I beg you, please, please, please don’t turn her into some kind of femme fatale in an upcoming book).

This brings me to Leslie. We don’t get much of Leslie in this book, and honestly, I was good with seeing that particular conflict tabled under To Be Continued. There is none of the Faceless Man, which I was also fine with, but I wished we’d gotten a bit more of Nightingale.

As always, Peter himself is my favorite of all the characters – he somehow manages to be a combination of clever and clueless, cheeky and honorable, snarky but a good guy down to the bones. At the climax of this book, he does something pretty amazing, and I wondered how he’d get himself out of the trouble that landed him into.

So yeah, I pretty much adored the book, but I do have a couple more gripes. The first is minor—I thought that Peter should have figured out what was going on with Nicole and Hannah’s phones immediately.

The second was a bigger irritant, and that was the copyediting. I don’t know what happened with this book, but the digital American edition was rife with errors. Here the examples I caught:

“He’d been there since the end of the July.”

“we raided her stupendously large American fridge, which was the size of cryogenic pod”

“There was a scatter of adults sat at the picnic tables”

“I smacked it hard with the branch, keep my grip loose so that I wouldn’t let go”

“holding up traffic while the kids the cross the road”

“as the Asbo climbed the hill to the top of ridge.”

Additionally, I noticed a continuity error with the numbers of the magic detectors Peter uses later in the book.

It’s a shame to have such an otherwise strong book marred by errors that could have easily been caught, but with those exceptions, I enjoyed myself to pieces reading it. Story-wise, it’s my favorite so far in this series, so despite the copyediting issue, I am recommending it. B+/A-.