REVIEW: Return of the Outback Billionaire by Kelly Hunter 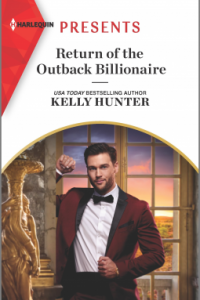 The billionaire is back.

And he has a startling proposal!

Seven years ago, Judah Blake took the fall for a crime he didn’t commit to save Bridie Starr. Now his family’s land is in her hands, and to reclaim his slice of the Australian outback, he’s got an announcement!

Photographer Bridie has always idolized Judah, to whom she owes her life. Until the moment he springs a very public engagement on her! As they thrash out the terms of their new relationship, she will have to reckon with the untamable attraction that makes even cautious Bridie long to be wild…

I will be honest and admit that I debated reading this book because I’m not usually one for the Presents line. Asshat gazillionaires and doormat heroines don’t thrill me. But then I thought, it’s a Kelly Hunter book. Yeah, gotta read it.

Judah Blake and Tom Starr saved Bridie Starr from an obsessed stalker (against whom Bridie had an AVO [US= restraining order] but the price – seven years in prison for Judah, PTSD for everyone, guilt and shame – was high and a secret remains. Can everyone work out the mental and emotional fallout and see to their futures?

Angst – Judah’s about what happened to Bridie and about lying regarding who pulled the trigger. Don’t worry, this is revealed early in the book. He’s also sad, mad, and angsty about the losses he suffered by doing the right thing and saving Bridie leading to seven years in jail during which his father turned to addiction, his mother died, and then his father died, leaving Judah’s younger brother to carry the load of the station until Judah was released. Also, he doesn’t want to risk losing control if things get physical with Bridie because … seven years behind bars and away from women.

PTSD – yep, Judah’s got that too understandably and not just in a “I don’t want to be within four walls with a door but would rather sleep outside under the stars” way which is a bit cliched but still true. No, we see in subtle ways like Judah eyeing all the many things in the kitchen that could be turned into shivs and obsessively eyeing and counting the knives to be sure none are missing, or having trouble going through an open door, or getting used to eating what he wants, when he wants it. Iron control kept him alive in prison and it’s oh, so hard for him to let it go.

Bridie’s got some lingering PTSD issues such as being in closed, dark spaces that might remind her of the trunk of the car she was in during the kidnapping. For seven years she felt paralyzing fear and barely left the station, had to initially work her courage up to getting past her own verandah, and only finally did so by taking the pictures of the Outback that she sent to Judah which helped keep him whole. As she tells him, the thought of him in prison for saving her acted as a cattle prod to get her a bit past her fears but she is still leery of strangers.

Other family members feel their own guilt over what happened – Bridie’s father and her aunt. I wish there had been more discussion on page of why her aunt felt guilty and more on page resolution of this. Something that’s gone on for seven years needs a little airing before being put away.

Bridie knows that Judah is feeling some sexual attraction to her and she has to balance her own sexual response to that with her past knowledge that some men can’t control themselves. So when Judah backs away from an inferno kiss, Bridie is conflicted as well as also wanting more from him. The scene where she gets over this is a little bit of bondage (and not of whom readers might think) and a lot of her taking charge. Go, Bridie. She also owns her sexuality and freely informs Judah that she enjoyed it and definitely wouldn’t mind a lot more.

Bridie’s thoroughness was killing him. Slowly, surely, as inevitable as sunset, she built a fire in him that threatened to become an inferno. She finished undoing the buttons of his shirt, and the brush of her fingers and knuckles almost had him coming out of his skin. She pressed a kiss to his chest as she slid the shirt to the floor, and then tilted her head up towards his.

‘How am I doing?’ Her voice only wobbled a little bit.

‘Let me just strike “gives effusive praise” off your list of strengths.’ But her hands kept exploring and her eyes shone with gentle humour and encouragement.

‘Pretty good,’ he offered in an effort to redeem himself.

This is a Presents book so it’s got a lot of the standard stuff from that line. Obscenely wealthy Aussie 1% with gigantic cattle stations, private planes (with sleeping quarters), and helicopters. A darkly brooding hero, a somewhat (initially) fragile heroine, a past between them, and a forced proximity relationship. And yet this is all done in ways that don’t make me roll my eyes. Bridie is fragile because of an obsessed madman who abducted her when she was sixteen after slowly taking control of her life, Judah went to prison because of what happened when he and her father saved her, and his determination to regain control of what he lost, including some land his father sold to Bridie, while locked away combined with making snap decisions overtook him in public and led to the “fake engagement” trope.

And even though they’re richer than sin, Bridie, Judah, and his brother want to set up an eco business and conservation trust with some of their cattle station lands – so not acting as privileged as they could be. And a couple who might sell land to add to this, loves the idea of selling it to Bridie and Judah so there’s another reason for them to go through with staying together for a while. Oh yeah, and Judah’s seven years of never backing down or showing any signs of weakness means that he needs to not have Bridie back out of the engagement and make him potentially look weak in front of business rivals/associates. It all actually makes sense!

They are both aware that they need to be cautious about how they see the other. Bridie isn’t quite the fragile young teen she was then while he’s not the total hero she built up in her mind. I admit that I was concerned about this part and appreciated that both Bridie and Judah are given enough time and space to work out being honest and that they do see the “real” other person before finally committing to the relationship. Whew!

There is one thing that could make people pause and that’s the resolution about how the not really spoilery knowledge that I mentioned earlier is handled. I had to think about it a bit. On the one hand, I’m glad that there are no secrets between Bridie and Judah before they marry. On the other hand,

there was and remains a miscarriage of justice even if the person who actually killed the man who had blown through an AVO and abducted Bridie and whom she thought meant to kill her is racked with guilt over how things played out.

But I really liked the way that Bridie and Judah worked on their communication – which had sticky periods. Bridie stands up for what she wants but also notices and addresses the fact that Judah has fears and issues he has to work through. There is no magic conversation or sex that solves or heals all. The dry humor had me laughing and

Even if he wasn’t one for fancy words. She could be the fancy-word provider. Not a problem.

I do feel that they’re right for each other and headed towards healing. Plus they got a wedding ceremony that they can dine off of for years and I learned of another Aussie treat I need to try someday – Anzac biscuits! B

→ Jayne
Previous article: Review: Nothing but Good by Kess McKinley
Next Post: REVIEW: Revenge of the Beast by Jack Meggitt-Phillips