Review: Nothing but Good by Kess McKinley 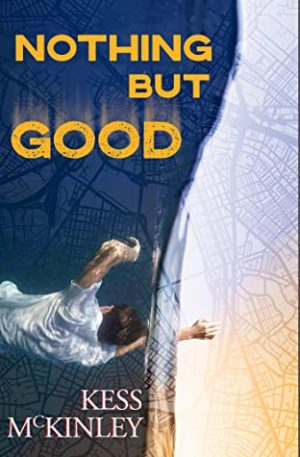 Special Agent Jefferson Haines puts the ‘order’ in law and order. Meal kits. Gray suits. Consistent reps at the gym. But all his routines are thrown into chaos when he’s called in to catch a serial killer whose M.O. is the stuff of urban legend: the Smiley Face Killer.

Dripping paint. Wicked slashes for eyes. The taunting curl of a smiling mouth. After years evading capture, the serial killer is back again. As Jefferson races to stop the next attack, the investigation leads to the one man he thought he’d never see again, Fred ‘Finny’ Ashley.

Finny has his own theories about the killer. And they’re pretty good. Maybe too good. Now, with his career on the line, Jefferson has to figure out if his one-time best friend is the culprit or the next victim.

I did not expect your book to work as well as it did for me, but I was very pleasantly surprised. I think the blurb is pretty clear on the genre of the story – romantic suspense. And this is one of the rare occasions where I think that the romance AND the suspense storylines were equally good. I mean, it is always a balance for the writer to make sure that romance is given enough page space in an action adventure storyline, but also to make sure that said suspense/mystery story does not look stupid and I think this author managed it very well.

I think the suspense/ mystery story is front and center here – two FBI agents hunting a serial killer, but Jefferson meeting his college best friend in the middle of the investigation brings the feelings he had for him front and center and makes him wonder what could have been if they did not have that fight eight years ago. Remember – investigation? Well, Finny lands right in the middle of it.

I did not think they seriously consider him as a suspect for a long period of time BUT at times Jefferson walks the line of being professional and also wanting to protect his friend. He never really *does* anything unprofessional, but a couple of times he wavers and I loved that his partner was there to smack him with words and “bring him back” so to speak. Because so many stories I have read which tried to mix romance and suspense/ mystery investigation landed in “agent being an unprofessional professional” land, I always worry when I pick up another one in this genre. But I think this writer managed to do it well.

Where the romance is concerned, I thought it was also a clever trick to have sort of a reconciliation / from friends to lovers romantic trope here so as not to develop a romantic attraction from the very beginning. Finny and Jefferson may have not been a couple when they were younger, but they certainly had feelings for each other and it does not take much to rekindle those feelings and not much page space is taken away from the hunting the serial killer storyline.

“Except he kind of did. In eight years, he hadn’t told anyone the full extent of how he felt about Finny; how much their fight had gutted him. The old mutual friends he met for a quick beer when they passed through town weren’t the kind he’d spill his guts to. On those occasions he’d focused on playing it cool, looking for whatever scraps of information he could get. Over the years as they all gained more responsibilities, those meetups had become few and far between until he almost never talked to anyone from school anymore, which meant he hadn’t learned Finny had returned to Boston until he saw it with his own eyes.”

I loved how the story was bursting with tension between the two men, on top of the tension of the suspense story.

My feeling was that Finny was not considered a suspect for that long, but I liked that the investigators took time to check him off the list. Although now I think that I was supposed to consider the possibility of him being a suspect for longer than I did. Love interest of the main character though? No, I don’t think I did.

I liked how thorough the investigation was. I liked how the author made sure to mention that the whole team was investigating, not just the two main agents and that added believability to the story, because with the amount of the investigative work they had to do, it would have been silly to have only two agents do the job.

“Jefferson turned up the music blasting through his headphones and adjusted his position to lean closer to the screen. This review could’ve been delegated to another member of their case team, but neither Caroline nor Jefferson was good at giving up control, at least not on the important things, and right now this seemed to be their most promising lead.”

I did not have an idea, though, of who the killer was and it was great! It was an intense and lovely read even if not a very long one. It has 189 pages on my kindle.

→ Sirius
Previous article: DUELING REVIEW: How High We Go in the Dark by Sequoia Nagamatsu
Next Post: REVIEW: Return of the Outback Billionaire by Kelly Hunter