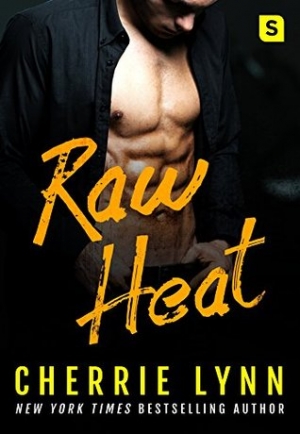 Raw Heat is the third book in your Larson brothers series, featuring the youngest Larson, Damien. Damien is a very successful poker player, holding a number of “bracelets” (which I gather is some kind of poker trophy) and the owner/operator of a successful nightclub in Houston, Players. Upstairs in Players is an illegal poker room. Damien has “safeguards” in place but his brothers, Mike and Zane, have long been worried he will be raided by the police and get into serious trouble.

Damien, because of his upbringing, is very emotionally closed off. As an exceptionally talented poker player, he has a lot of experience keeping a straight face no matter what is going on inside him and many people find him difficult to read in the extreme.

Emma Haskell is the accountant at Players. She has an uneasy relationship with the illegal poker game upstairs. She is uncomfortable with its illegality but the money Damien pays her is enough of a salve to her conscience. She particularly needs good money because her brother, Benjamin, is a gambling addict and relatively recently, was so deep in debt to loan sharks, Emma’s parents were forced to cash in their retirement funds, sell their house and downsize to raise enough money to bail him out of trouble. Emma is angry her parents will have to work much longer in order to live and unhappy that her parents enable Benjamin’s addiction, although she realises full well she’s been responsible for just such enablement herself.

Having believed Benjamin to be on the straight and narrow after receiving so much help from their parents, Emma is shocked and dismayed to see Benjamin at Damien’s poker game one night. She’s even more upset to learn that he owes Damien more than $30K and will be back to try and win back his losses. Damien understands Emma’s loyalty to Benjamin but he also knows Benjamin is not going to change and she’d be better off cutting him loose and allowing him to rise or fall on his own.

More in order to protect her parents than Benjamin, Emma makes a devil’s bargain with Damien. Benjamin and Damien will play a game of poker. If Benjamin wins, his debt with Damien is cancelled. If Damien wins, he gets Emma for 30 days. While Emma is horrified by the offer and it doesn’t speak well of Damien to even make it, there is a definite underlying simmering heat between them and ultimately Emma accepts the deal as not just a way to clear Benjamin’s debt but also to give herself what she really wants. The risk for her is not to fall in love with Damien because he’s told her very clearly that at the end of their month, he will walk away. (Of course, it’s not at all a surprise that Damien wins the game and Emma has to pay her “debt”.)

Damien is also very generous with Emma, buying her expensive clothes and shoes, pretty much whatever she wants because that’s the kind of guy he is. Emma’s little Chorkie dog, Bentley, approves of him so readers know that deep down Damien is clearly a good guy. (Bentley detests Benjamin so there’s extra proof there.)

I didn’t mind the set up of the book even though it had something of a darker edge. Emma knew what she was getting herself into and she had, always, the choice to walk away. She acknowledged to herself many times that her participation only enabled Benjamin further but she did it anyway. My clear sense was that ultimately, apart from the plot device to get the characters together, it was also what Emma really wanted. For that reason, I was comfortable with it but I suppose others will not feel the same way.

Unsurprisingly, both Emma and Damien find their connection is much deeper and stronger, and not only sexual, than expected and both find themselves in risky emotionally uncharted waters. This is where the book surprised me a little because Emma is very up front with Damien about her developing feelings for him. Within the first couple of weeks Emma is pushing Damien for an ongoing relationship and wanting him to acknowledge some feelings for her. While I appreciated her honesty, it also felt a little overblown from time to time and just a titch manipulative (from an author/reader perspective). It seemed designed to ramp up the tension between them without necessarily making sense to me. There were times when some of their more fraught discussions seemed to come completely out of left field and I was occasionally left with a bit of readerly whiplash.

Emma eventually is also forced to deal more definitively with her parents and Benjamin about his addiction. I appreciated that there were no easy answers offered or taken in this.

The amoral offer of Damien’s bargain with Emma is specifically addressed and he does give exceptional grovel so I believed the HEA even though most of the book takes place in three or four weeks. Emma and Damien do very well together, challenging each other in good ways and being a safe space for one another in others. They certainly have scorching sexual chemistry; their sex is inventive and clearly demonstrates their growing emotional connection.

The previous series heroes and heroines make an appearance in the book in ways that felt natural but I was disappointed that Rowan’s daughter wasn’t mentioned at all, not even in passing. I admit I got a bit hung up on where on earth the baby was and who was looking after her when Zane and Rowan were swanning about in Las Vegas.

I enjoyed Damien’s assistant and confidant, Stacia and her relationship with both protagonists and I loved Emma’s BFF, Liz. I’d happily read a book about Liz by the way. *hint hint*

Raw Heat was definitely sexy, albeit with a slightly darker edge than the previous books in the series and, apart from some clunky transitions, I liked it very much.

Also, is it just me or does the guy on the cover look like he’s checking what’s in his pants?