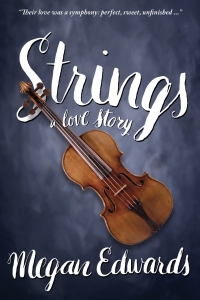 The Merino Rose. Ted Spencer has a hard enough time believing the celebrated violin really exists. To find it sitting on his coffee table is nothing short of incredible. The stuff of legend, the exquisite Guarnerius has been missing for centuries.

But even though the renowned instrument is a violin lover’s dream come true, it holds only heartache for Ted. The value of the Merino Rose may be beyond measure, but he has acquired it at too high a cost.

Ted found his soul mate when he met Olivia de la Vega his senior year in high school. In the school’s production of Camelot, Ted was cast as Lancelot, Olivia as Guenevere. They should have spent their lives together but strings got in the way—family ties, career objectives, and the tangled web of fate.

Will the Merino Rose bring the two star-crossed lovers together at last, or will their love always remain the melancholy sound of distant violins?

A good “second chance at love” story can reel me in and this one seemed to promise that plus a beautiful missing violin of priceless worth. Would this couple finally get together? I requested to read the book in order to find out.

There are all kinds of issues brought up here beyond just the love story. From the first page, it’s clear that Ted is fighting the good fight with his family about his interest in music and also obvious that he’s going to keep at it. It’s the late 1960s and Ted has lived a life of privilege due to his wealthy family’s business but his father is the controlling type and Ted relishes being away at boarding school which allows him some freedom. If not for his best friend’s joking around, Ted might have missed his true love though as it’s Bill who gets Ted to try out for the school production of “Camelot.”

The second issue arises when the part of Guinevere gets cast. The sophomore daughter of one of the school’s cleaning women whose father was Mexican is announced as the winner setting off some sly and snide comments from the students who didn’t get the role. When Ted first meets Olivia, it’s fate. But can high school students really know they’ve met The One?

It appears they can and in this case do realize it but Fate can be a fickle bitch and the most ardent love story can get derailed. Ted and Olivia seemingly find the careers they’ve always dreamed of but at a cost they might not even realize until Fate brings them together again. It’s years later and inertia plus more baggage has piled up in their lives, more strings tying them to others and pulling them apart. Will there ever be a time for them or was their brief moment of “Camelot” over all too soon?

There’s a lot going on here. Can Ted face up to his parents about his career choice vs blindly following the path they set for him? Can he also dig up the courage to go for whom he wants in the face of prevailing attitudes? What about parental misunderstandings and the role they might play in keeping Ted and Olivia apart? And once you’ve gone down a road, is there a way back or once enough time has passed, is the opportunity lost?

The book is charmingly told in first person by Ted. Teenaged angst and love at first sight mingle with missed chances and more mature obstacles. The love story is literally down to the last page before it gets sorted and there were times when I wondered if I would finish a love story or a bittersweet lost love book. I was swept along and it’s a book that practically reads itself as I sucked it down in record time.

Yet on reflection, after I finished it, I realized that there are lots of issues raised but some of them are never truly delved into or in the end, settled. I guess these can be filed under the category of we all make mistakes and some things can’t ever be fixed in life. Ted also lets life carry him along once he’s made his grand stand of career choice. His default seems to be let someone else make his life choices then run when things get sticky. Olivia’s ethnicity is also given short shrift since the story is only told from Ted’s POV and he loses track of her after graduation. Even years later there is nothing said about how her heritage might or might not have affected her opportunities in the 1970s.

I wanted happiness for these two and kept my fingers crossed that things would work out but I wish that more time was spent dealing with the issues that were introduced then abandoned. B-

Want to know more about a Guarneri del Gesù? They aren’t as well known as a Stradivarius but some musicians like them better.