This book won the RNA Romance Novel of the Year Award for 2011. The RNA Award is unique because it involves readers, authors and other industry professionals working together to award one book. I thought it would be fun to repost the review.

“How much can you hide?

Jemima Hutton is determined to build a successful new life and keep her past a dark secret. Trouble is, her jewellery business looks set to fail – until enigmatic Ben Davies offers to stock her handmade belt buckles in his guitar shop and things start looking up, on all fronts.
But Ben has secrets too. When Jemima finds out he used to be the front man of hugely successful Indie rock band Willow Down, she wants to know more. Why did he desert the band on their US tour? Why is he now a semi-recluse?
And the curiosity is mutual – which means that her own secret is no longer safe …”

Since I enjoyed the first book of yours I read, “Slightly Foxed,” I jumped at the chance to check out your latest release, “Please Don’t Stop the Music.” Your description of it as a ‘dark psychological romance – with jokes’ is dead on. I knew from the beginning that there were going to be angsty emotional revelations along the way but I still enjoy laughing a bit on the road to them. 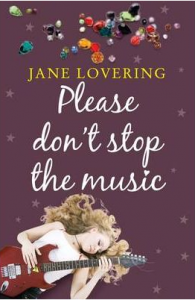 These are two very wounded people who have both current and past problems. They have to open up in order to heal and allow for possible future love and you take the time to pry them open, almost like clams, to allow this. Thank you for giving them REAL problems and not just “I’m so misunderstood by the world” navel gazing idiocy. I like that you give us some clues about what these issues are – it’s not all coy as some stories are – but the final revelations are still powerful and haunting. But it’s good that Rosie and Jason realize that Jem is hiding something – what friends would they be if they didn’t plus they’d look like idjuts.

I can kind of understand why Jem keeps running and almost runs again one last time. She’s got some serious self-esteem issues she has to deal with. Her warped views on sexuality were gained at a relatively young age and she’s both ashamed of what she allowed to happen and still not quite over it. But as Ben points out – look how she’s grown in the time since he’s met her. She is willing to confront Saskia (what’s with the popularity of this name anyway?) to help her friend Rosie and him and at least she realizes what her problem is even if she’s still sees running as how to overcome it. Ben does a wonderful thing for her in following her and *showing* her what she means to him. I don’t think Jem would believe it any other way.

Ben also has to overcome not only his “sex, drugs and rock’n’roll” past but also the guilt over how he left the band and the grief of the reason why. He had to get over the ‘towering artiste knocked down in his prime’ delusion. But get beyond it he finally does as he admits that he wouldn’t take his past back as a gift if it meant not having Jem in his life. That was a powerful revelation. No, he’ll never play again but he can still work in music.

Even after the explanations of why she did it, I have to say that Saskia gets away with too much. Her reason for what she did doesn’t excuse her for trying to ruin two lives – and harming Ben’s business as well. And she appears to be walking away from it scot free. Perhaps Jem and Ben will put the York trade authority screws to her but I needed to see some punishment or retribution.

I love that baby Harry isn’t a little bundle of total joy and happiness for Rosie. He’s not just a plot moppet but a real influence on Rosie and Jem and Jason’s lives. Rosie’s issues are certainly different and I did wonder about her relationship with the father but you turned that for an interesting twist as well. I like the sort of open ended finale – Jem and Ben look to be working things out. Jason and Rosie as well but no wedding bells are shown yet.

Yeah for the York setting again. Yes, there are other parts of England besides the Home Counties and London and I’m delighted to see them! I love the image of the center of York with streets that fold in on each other and hidden nooks and crannies. Plus I enjoyed the sardonic English humor in the story. Jem and Ben take the piss out of each other on a regular basis.

The book is Chick Lit’ish in that it’s mainly first person but there’s much more angst and we get Ben’s thoughts through his journal, which I loved. You’ve done a good job showing the arc of the characters’ development and change – of Jem and Ben falling in trust with each other, feeling safe and happy with each other, then falling in love. You put these two through the wringer a time or three but theirs is a HEA I believe in. B

→ Jayne
Previous article: REVIEW: The Fireman Who Loved Me by Jennifer Bernard
Next Post: If You Like…Romances Set in South Asia or featuring South Asian characters