REVIEW: The Fireman Who Loved Me by Jennifer Bernard

The romance of this story was enjoyable but the sweet and sometimes serious nature of the romance was offset by over the top descriptions of the “villains” of the story creating a cacophonous tone mismatch. A late conflict arose in the book and while it could have provided a challenging and very real impediment to the happy ever after (and thus making the connection of the lead couple all the more satisfying) 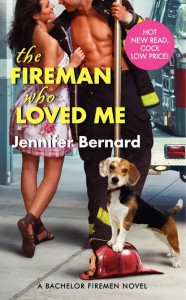 Melissa McGuire ends up in San Gabriel working as a news producer at the local television station after being humiliated in Los Angeles. She had an affair with her boss that went south

Her grandmother is convinced that Melissa needs a boyfriend and buys a date for Melissa with a fireman at a local bachelor auction. When the bachelor fireman backs out because of a desire not to go out on a date with a grandmother, Captain Harry Brody takes his place. Brody is used to acting as the father figure to many of the younger firemen and conversely they all hold Brody in awe because of his steadfastness and his past history of bravery.

Brody isn’t interested in dating right now. He’s trying to rebuild his life after a painful divorce but Melissa strikes all the right chords for him. The two end up spending a lot of time together when the local media personality, Ella, (one of the villains) decides to do a reality special involving the San Gabriel Fire Station. The Fire Station is famous because the all bachelor crew was featured on the Today Show and in People magazine.

Brody is a really great hero. He’s unshakeable. There is a scene early on in the book where Melissa is relating all her assumptions about firemen and Brody doesn’t rise to the bait:

“I apologize if I was rude,” she said, nose in the air.

“Why should I, when you seem so convinced that you are?”

“You could at least try to defend yourself.”

She gave a squeak of pure frustration.

“Don’t you ever get rattled?”

“It’s part of my job to not get rattled.”

His character was consistent throughout. The steadying hand, the leader, the guy who watches out for others. Melissa was observant, as befitting her role as a news producer, and a quick learner. She led her tribe of news people in her own way. She was quick to make amends, didn’t hold grudges, and allowed herself to be educated.

Brody and Melissa were the best parts of the book but we saw so little of them together that the romance and their interaction took a back seat to the atmosphere of the firehouse, the backstabbing news room, and the machinations of the villains–Ella and Melissa’s former boss, Everett. Ordinarily, in a straight contemporary, I wouldn’t identify people as villains but from the way in which two of the characters were written, they fit the profile perfectly. I am pretty sure one, if not both of them, twirled a virtual mustache after every encounter.  For instance, Everett is using Ella to get back at Melissa and Ella is trying to use Everett to get a better job.  Their sexual encounters, which are often degrading for Ella, are described in some detail.

There was little relationship conflict other than standard and heavy handed use of the big misunderstanding until the last third of the book which is probably why so much of the first part of the story was filled with non relationship story lines but the relationship conflict was one that could have provided a real challenge. Brody’s ex wife returns to his life with a child in tow. It isn’t his, but Brody had always wanted a family and he can’t turn his ex wife who needs him away. The way in which this storyline is resolved, however, is written with the same over the top narrative used with the villains. The tension in the story seemed too manufactured and while I liked the leads, they weren’t together enough on paper to keep me interested. C

P.S. As a side note, I am not one for sequel baiting, but this book did the opposite. Ryan, the lead in the sequel to this book, bails on the date with the grandmother because he fears the teasing he will get from his fellow firefighters. He also takes a shine to the empty headed and mean spirited Ella displaying that he is turned by a pretty face and not much else. He came off as self centered, shallow, and a bit of a simpleton.

→ Jane
Previous article: What is this price fixing lawsuit about anyway? A Q&A
Next Post: REVIEW: Please Don’t Stop the Music by Jane Lovering