On the heels of a family tragedy, Katie Greene must move halfway across the world. Stuck with her aunt in Shizuoka, Japan, Katie feels lost. Alone. She doesn’t know the language, she can barely hold a pair of chopsticks and she can’t seem to get the hang of taking her shoes off whenever she enters a building.

When Katie meets aloof but gorgeous Tomohiro, the star of the school’s kendo team, she is intrigued by him…and a little scared. His tough attitude seems meant to keep her at a distance, and when they’re near each other, strange things happen. Pens explode. Ink drips from nowhere. And unless Katie is seeing things, drawings come to life.

Somehow Tomo is connected to the kami, powerful ancient beings who once ruled Japan–and as feelings develop between Katie and Tomo, things begin to spiral out of control. The wrong people are starting to ask questions, and if they discover the truth, no one will be safe.

Katie never wanted to move to Japan–now she may not make it out of the country alive.

When offered the chance to read and review your book, I jumped at it. YA and paranormal usually aren’t my thing but this looked to stand out in the crowd of ho-hum. Set in Japan, with a Japanese hero and secondary characters plus drawings that move and come to life – and can attack people as Kami are unpredictable – this promised something unique. 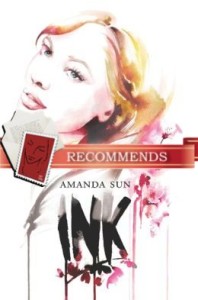 But before the unique kicked in, some standard YA tropes needed to be established. Katie is an orphan whose mother died suddenly and whose father was never in the picture. With her grandfather fighting cancer, Katie gets sent to her aunt, an English language teacher in Japan. She feels isolated due to her lack of knowledge of Japanese – though she’s working hard on that – and the usual new-to-school lack of friends – though her circle of friends expands as the book continues.

Katie, Yuki, Tomohiro, Tanaka and the others sound like teenagers – a little sulky, a touch bravado-ish, sometimes over enthusiastic and at others painfully uncertain. Nothing goes beyond kisses and even that is considered daring and awkward but I didn’t need more as the connection between Katie and Tomohiro is well developed and shown.

So why would a senior and popular student take any interest in a younger Gaijin who frankly seems to initially stalk him? Because of her brashness. Tomohiro hides a terrible secret that he knows could get him killed and which leaves him fairly isolated despite his popularity. He pushes people away both to protect them and to keep others from using his feelings for anyone against him. Katie is the only person who isn’t afraid of the “tough guy” act Tomohiro affects and who pushes back and in doing so shows that she’s strong enough to finally be let into his life.

Katie is pushy at times. She knows Tomohiro is hiding something and is determined to discover what that is. What kept me from being slightly annoyed with her actions is that they are a great opportunity to show life in Shizuoka and how different school experiences are. Students cleaning the classrooms and restrooms after school? The wide variety of after school clubs? Proper etiquette towards teachers? How to welcome the annual cherry blossoms?” Ink” goes into all of this and I found it fascinating

One sweet thing about the story is the slowly building relationship between Katie and her Aunt Diane. Initially they’re almost strangers and still working out their grief over the loss of their mother/sister. Though Katie doesn’t pitch sullen fits, she doesn’t exactly match Diane’s sometimes uncertain efforts to fit her into life in Shizuoka. But their quiet efforts eventually pay off in some moving scenes of how much each comes to mean to the other.

The initial secret that Tomohiro tries to keep from Katie propels the first half of the book. Evading the villains who might try to use Tomohiro’s abilities carries us along further. But then suddenly a new threat emerges with a plan that lands the book firmly in conspiracy theory territory. The existence of more potential villains – or allies depending on how one views them – isn’t exactly from out of the blue but the sudden shift in scale from local gangsters to … well to what it’s changed to is very dramatic and verging on OTT.

The end of “Ink” comes at a point where immediate threats have been nullified but it’s obviously not the end of the story as several things still need to be explained or resolved. Who or what is Katie and why does the ink respond to and seek her? Will Tomohiro be able to control his powers, remain sane and stay out of the hands of those who wish to use him? Where will Katie ultimately end up living? Is there hope for a long term romance for Katie and Tomohiro? I’ll be staying tuned for the second book in the series. B