Provoked is considerably different from your first two books, and not just because it’s male/male. As I read it, I kept feeling a little off-kilter; it gradually became apparent that this story is not a traditional romance. Although it doesn’t exactly have a cliffhanger ending, it should be considered a first volume, like The Fellowship of the Ring.

Scotland, 1822. David, the son of a poor farmer, has worked his way up in the world and is now an advocate. After witnessing the execution of two of his clients for treason, he’s understandably depressed, and more susceptible than usual to being lured into an alleyway tryst with a handsome stranger. The event has an unexpected effect on him:

David was accustomed to reliving his rare encounters with other men. Usually though, he was mired in regret as he did so. This memory was different. Much as he tried to concentrate on what it had felt like to kneel on the filthy wet ground and give in to his abiding weakness, what he kept remembering was the moment Balfour dragged him to his feet and kissed him. Balfour’s warm, firm lips. His sleek tongue. His solid presence.

And not feeling alone.

David never expects to see Murdoch Balfour again, but their paths keep crossing as David navigates a set-up with a sweet young woman, and helps a client’s brother seek out a betraying agent provovateur. David discovers that Murdo is the opposite of him in almost every way: rich and high ranking, hedonistic instead of ashamed of his desires, and deliberately heedless of anyone’s interests besides his own, while David is moral to the point of self-sacrifice. Nonetheless, he continues to touch David in ways that are more than physical:

For a moment, Balfour simply stared at his outstretched hand, til David felt so uncomfortable he wanted to draw it back. But then Balfour took it, and in one swift movement, turned David’s hand over, palm down, and lowered his head to press a kiss to the back of it.

Balfour’s lips were soft and warm, but the fingers holding David’s hand were strong and determined. The gesture made David feel supremely off-balance. It was typically Balfour: challenging and humorous at once. Making a woman of David with his queer courtliness. It was… romantic.

As this quote shows, the fundamental differences between David and Balfour aren’t the only thing keeping them apart. A product of his culture, David is unable to recognize the possibility of romantic commitment between two men. And he refuses to see how Balfour is growing to feel about him.

The story is told entirely from the point of view of the very likeable and sympathetic David, so we see Balfour only through actions that David doesn’t always understand. That, along with Balfour’s more aggressive character and the fact that he is often off page, gives the book the feel of a classic category romance — or perhaps less a romance than a Bildungsroman. David is dealing with numerous ethical issues as he tries to figure out how to live a principled life, and his “sinful” urges and interactions are only a part of his story.

There are times of great tension and excitement, but Provoked mostly moves at a gentle pace, suiting its gently heroic subject; still, I was never less than thoroughly absorbed in it. And though the multi-book format can be irritating, it made sense here, because this is just one episode of David’s life. I’m looking forward to the progression of his “enlightenment.” 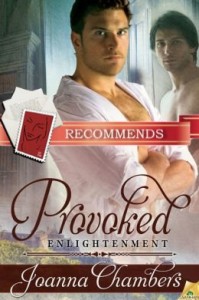 I thought the writing in this book was gorgeous – when I want to stop, reread, taste every word or almost every word.

“A wave of intense sadness and loneliness swamped him. Was there all there was? A few brief moment of connection – the grasp of another’s hand on the scaffold – and then you were cast out, alone, into the great universe?”

While this quote refers to one specific event, I actually think that overall for me it reflected the mood of the book.

I loved that the romance between the main characters was set up during the events that were larger than they were if that makes sense. I do not mind the historical romances which are set in a limited space and give us rare glimpses of the world outside, but I do want to see and learn more about the world outside, not just enjoy the romance. David’s defense of weavers accused of treason set up several interesting plot developments and possible implications for him and Murdo Balfour, which I suspect will play out in the next books of this trilogy. But it also made me think about how many rebellions, revolutions of the past could have been avoided if the people in charge would just tried to do something to improve working people’s conditions before it was too late, before workers just could not deal with the horrors of their existence anymore and everything exploded into violence.

It is in this setting that David and Murdo Balfour meet for the first time. I am not going to tell you the reason why Murdo was in Edinburgh, but you can see that the blurb hints that he could have been the person who betrayed the weavers to the government. I was really impressed that the author managed to make the resolution of that storyline very suspenseful. It was something that mattered to me and I understood why it mattered to David – to know one way or another.

I completely believed in their fast attraction when David and Murdo met, and liked that they still showed enough cautiousness before they acted on it. I liked that initial attraction was seemingly all about sex, because this is all I can believe in when I am confronted with it in the story. It is strange when I am thinking about it in retrospect – it definitely was fast, because they have sex very soon after they meet, but at the same time their conversation felt like such a cautious dance around each other.

David is a POV character in this book, so of course we learn a lot about him, but even though we only see Murdo through David’s eyes, I think we also learn at least a little bit about him. I thought that David was a very multilayered character to me – yes, he experienced a heart break in his past (I think most romance heroes have that in their pasts) and yes, at times he hates that he is attracted to men, which in historical romance is totally understandable to me and actually preferable to “Oh despite society around me condemning the men of my preference, I am totally and completely at peace with who I am”. But the heartbreak that David experienced in the past did not turn into a consuming trauma that stopped him from leaving a productive life in society. This portrayal was a breath of fresh air to me, because so many men in m/m stories seemed defined by their past traumas. David’s past is definitely part of who he is, but he also defines himself as a professional, as somebody who while coming from a modest family worked hard and seemed to have a desire to advance in his profession. I really liked that.

Murdo seemed to me to be a more typical character – “tall, dark, brooding and handsome” I think defined him for me, at least for now. It was interesting to see that while initially it seemed that he was more accepting of his attraction to men, at the end of this book I was really wondering which one of two men was more honest with themselves and accepting of who they were. I wonder if he would be a POV character in the second part of the story, because I really would love to get into his head.

I am always pleased when I see a nuanced portrayal of women in m/m stories and I have to say that this story made me really happy in that sense as well. There are several women in these stories and at least three had enough parts to make me interested in their stories. They are not caricatures, one of them is very likeable and even Isabella just had that potential, even though I did not find her very likeable in this book. But she felt like a human being and that’s all that mattered to me.

As I mentioned previously the book is the first part of the trilogy, so there is no happy ending in this installment, but I heard there definitely will be one at the end.