REVIEW: Make Me by Charlotte Stein

My favourite kind of menage stories are m/m/f – it seems to me to be a more equal type of triad relationship, each person being sexually attracted to the other. I was in the mood for something quick and dirty and the promise of this one was too much to pass up. Plus, it was only $1.99.

Maisie had no idea her best friends could be so kinky. But now, ten years after the most intense sexual encounter of her life, she’s about to discover just how sexually flexible they can be.

Forced to face Brandon and Tyler, Maisie comes up against something she doesn’t expect: the intensity of her own desires for things best left in the past. But once Brandon’s confessed to her just how persuasive Tyler can be when it comes to kinky encounters, Maisie finds that some things can never be buried. She wants them both, and she’s no longer afraid to admit it…

The blurb is wrong by the way – it’s 5 years after a drug-hazed sexual encounter between the three. Maisie is invited to the opening of a bar owned by Tyler and Brandon. She hasn’t seen them since the night things got heated between them, after which she basically ran away. Maisie is more comfortable in her sexual skin now and when it is apparent that the chemistry between the three remains off the charts, she decides to go for it and see where it may lead. 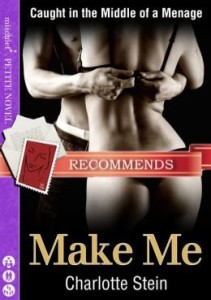 You write very hot (and dirty) sex. There is a deliciousness to the way you seem to revel in the messy and sticky of it, not shying away at all from explicit language or descriptions, which appeals to me.

Tyler is the more dominant of the trio – with Brandon happily giving up control and taking direction. It becomes clear that in this way, Brandon actually gets to do what he wants, what he feels he could not ask for otherwise. Maisie is happy to be mainly on the submissive end of the spectrum but tries her hand at dominance too. The places the threesome are prepared to go with one another do speak to their mutual trust and affection – my impression is that neither Brandon or Maisie would be able to be so sexually free with someone else. (It is not quite as clear regarding Tyler.)

The story is told from Maisie’s first person POV and that, combined with the short word count, means that there’s no deep exposition of Tyler and Brandon’s characters. (There’s not all that much more of Maisie, notwithstanding she’s telling the story.) What there is, is gleaned rather than explicitly stated and peppered throughout the sex scenes and in the short pieces which link the sexual encounters.

Brandon’s hand slides down over his eyes, but Tyler seems completely unfazed.

‘I think a little gay is usually called being bisexual. But I can see where you’d be confused. Being bisexual is like being the tooth fairy – very few people actually believe in you.’

‘Do I have to clap my hands so you don’t die?’ I say, and am really proud of myself for doing so. Most of my body wants to collapse in on itself like a dying star, so really it’s a miracle I’m managing to talk at all.

‘I think you might have to clap your hands so Bran doesn’t die,’ he replies, because he’s so smooth and sharp and also really, really right.

I felt, at the end, that I would have liked perhaps 10 or so extra pages to explore the characters a little more and so I’d be more comfortable with the HEA. Brandon and Maisie do love each other and Maisie loves Tyler too, but Tyler’s feelings are more opaque, notwithstanding the last paragraph. The practical realities of a long term triad are not really covered in the story – which isn’t necessarily a criticism – the story charts the beginning and I was happy enough to leave it there – but I’d have liked to have been more certain of Tyler’s feelings and perhaps more, I wished to know more about why the men left Maisie alone for so long, with no attempt at contact. That seemed inconsistent with how quickly they began a relationship with her after 5 years apart.

It is super hot and dirty and I liked it. I give a B