The title of this book rang a bell when I saw it for sale. Since it has such a positive reputation and was a Newbery Honor book, I felt confident that it would be worth my time to seek out and try. I immediately fell for Catherine, called Birdy. But I also acknowledge that if a young woman who might act and think like Birdy actually existed in England in the year 1290, she would have been one in a million. 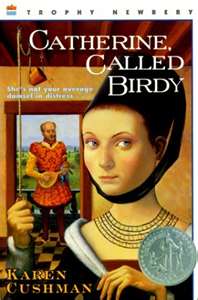 Birdy’s diary faithfully records a year of her life beginning when she was fourteen. It’s funny and honest in that Birdy doesn’t try to make herself out to be better than she’s actually behaved. But then lots of times Birdy doesn’t think she’s done anything wrong even when her mother,her nurse and the beast, aka her father, see it otherwise. It shows her initially rebelling against the standard activities that would take up most of the day of a girl in her position. She hates sewing, she hates embroidery, she hates standing and stirring cauldrons of nasty smelling soap. She hates fleas and the thought of marrying the kind of men her father keeps considering as potential husbands for her. She wants freedom – as she knows it – and a choice in her life. She sounds very much like a teenager today. Is this historically correct? Probably not to the degree that you’ve shown here but then you’re writing the book for today’s modern young women. Females of 1290 would no doubt view Birdy as a strange and alien creature while an accurate depiction (if that was even possible for us to achieve) would bore modern girls beyond belief.

During the course of the year, Birdy dreams of running off and taking up a variety of different trades and jobs. One by one, however, she rules them out or is told – sometimes gently and sometimes not – how unsuitable she is for them. Being a knight on crusade? Or a monk drawing illuminated books? Or a puppeteer at a fair? Or even just a villager? No, none of these are possible for her. So you have her use her brain to try and swing events to go her way instead of you turning her into a dreaded anachronism. In various ways, Birdy presents herself to these awful suitors as the last thing they want in a wife. And for the most part it works, much to her mother’s distress and father’s anger. Birdy might dream of running off and becoming all sorts of unsuitable things but when the rubber meets the road she fights in the only real way she can to get any control over her life that is possible.

But she also matures and gets advice from several older women about life and how to pick your battles. She sees instances where people act in ways Birdy might not initially understand or accept as what she would do but which are what those people think are best. She begins to understand that maybe she doesn’t know everything and that she might need to rethink her impressions of the people around her. Perhaps her older brother Robert isn’t quite the abomination she’s always thought he is. Birdy’s friend appears to believe it. Maybe the beast her father is a better husband than Birdy knew. Birdy’s mother certainly thinks so.

Is Birdy’s change of heart over her upcoming marriage growing up or giving in? Mainly I think growing up but that comes with a whiff of giving in. She’s still not enamoured of the man her father has chosen for her when she decides to face the music. But the advice that’s been given to her finally sinks in and begins to make sense to her. She can still be herself no matter where she is or goes and no matter what she becomes. No one can take that away from her and she has the power to make the best of whatever situation she finds herself in. B