In flipping through the Blaze ARCs sent to us by Harlequin, I picked up your book first. I’ve read and enjoyed you in the past. For 2/3 of the story, I felt like this was a book I could recommend to Dear Author readers but it kind of fell apart at the end; however, aside from the odd suspense element introduced which served as the relationship ex machina, this was a charming love story. 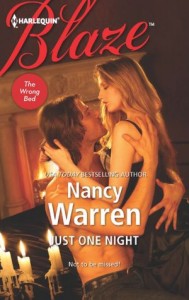 Rob Klassen is a photojournalist, injured by a bullet wound during his last excursion near the Ras Ajdir border between Tunisia and Libya. His editor is putting him on sick leave until Rob can run a 6 minute mile so, as his boss puts it, “the next time you have to run for your life you can make it.” Rob has no real home or roots. His only relative, the grandmother who raised him, recently passed away and his adult life has been spent traveling to one location or another to take photos for World Week magazine, one of the premiere news magazines in the world. He decides to retreat to Bellamy House, the home that his grandmother bequeathed him in Seattle.

Hailey Fleming is an up and coming realtor whose heart has been broken too many times.  I never knew what age Hailey was and I didn’t know why she wasn’t more established in her career. This is an important component because Hailey argues she doesn’t have time for dating because she is trying to become a success as a realtor. She also states that she’ll think about dating in one or two years. Yet later in the book she states that if she was wooed by a local she would be interested. Color me confused. Her emotional arc wasn’t as consistent as Rob’s and at times felt like it was merely constructed to provide a sense of conflict.

The end where it unravels for me inserts a romantic suspense element that may have been vaguely foreshadowed but used up valuable page space that could have been put to better use exploring how the two parties could enmesh their different lifestyles.  The two had somewhat similar backgrounds in that they were both rudderless youths.  Rob’s was more traditionally dire but using that as an excuse for Rob’s inability to settle down wasn’t well juxtaposed with Rob’s real love for photojournalism.  In other words, I didn’t buy that Rob’s desire to be in the thick of things arose out of his shitty childhood or that it would dissipate just because of the love of Hallie.

Hailey’s desire to build a career in Seattle and Rob’s desire to continue taking amazing photographs in far flung places weren’t two entirely incompatible desires so long as separation was feasible.  Yet, that option wasn’t even considered.  It seemed like Hailey believed that in order to be *with* Rob, she had to physically be by his side in wartorn countries, holding his camera bag.

There is a secondary storyline involving Julia, Hailey’s best friend, and her aborted attempts at internet dating. It was kind of a reverse makeover story (gender reverse) and at times I thought it was cute and others I thought it was overly shallow.  Hallie and Rob’s was a tender love story and I liked the love scenes, the gentle humor, and just the tenderness that Hailey and Rob exhibited toward each other, even when they were apart.  C+