“For two people who don’t fit anywhere, we get along well” sums up the romance between two outsiders, David and Annika.  This unusual romance between a the volcanic naturalist David and the airship engineer Annika might be my favorite entry in your Iron Seas series.  It is one of my favorite books of 2012.   My review may be TL;DR for many (Too Long;Didn’t Read) so I’ll provide a short summary.  Two outsiders meet, fall in love, overcome impossible conflicts, and confess their love for each other amidst an epic snow filled scene. 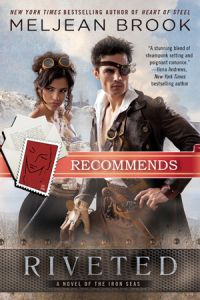 David is a naturalist ostensibly mapping out volcanoes in Iceland, but he’s also a man with a secret mission – to place his mother’s necklace of runes at the burial site of her maternal forebears.  Annika is an engineer for Captain Vashon’s airship. She signed on four years ago to find her sister, Kalla, who left their small Icelandic village.  When David becomes a passenger on Captain Vashon’s airship en route to Iceland, David and Annika fall for each other.

His mother never spoke of the location of her home, but David knows it is in Iceland and if he has to survey the entire Island to find the home, he will. Annika is from that same region but she refuses to tell David the information he wants to know because she cannot expose her people to the world. They’ve been hidden for 100 years in safety. Some of the people from the village leave and return only for visits, helping to facilitate commerce for the village but everyone keeps the location and its existence a secret. (I wondered if this was the Iron Seas version of an Amish steampunk romance and Annika was on an extended rumspringa).

The conflict would be enough for most books, but this series has always been about the exploration of Other.

Annika set out in search of her sister who was cast out for a misdeed of Annika’s.  Burdened by guilt and shame, Annika seeks not only her sister, but redemption for herself so that she can show her village that she is more than the “rabbit” they have nicknamed her.  Annika’s upbringing in her village was unconventional compared to the rigid rules of the New World and other locations she has visited, each with their own customs and societal expectations. She is often deemed improper. While she “fit” at home, she was also viewed as timid and weak. To some extent she is off on this journey to find herself.

David’s family suffered from a tragedy caused by an inventor – it was in this tragedy that David lost his mother and parts of his body.  They reconstructed him out of metal and nano agents.  The Steampunk Bionic Man.

His right hand resembled every other person’s—large, perhaps, with broad palm and long fingers, but proportional to his height. His left hand and wrist were of the same size, yet they were human only in shape; the skeletal limb had been constructed of steel. The fluid movement as he spread his mechanical fingers was indistinguishable from the same movement in his right hand, and spoke to the intricacy of the design—the contraption wasn’t stiff, but responsive . . . and probably incredibly strong.

No, he didn’t carry any weapons. But from the guard’s perspective, the man’s hand was a weapon—and the man himself a danger to Castile.

Even one of his eyes was a prosthetic:

Oh! And that was not a monocle at all, but some sort of optical contraption that had been embedded into his temple, which shielded his left eye with a dark, reflective lens.

While David lives abiding by his father’s mantra of looking for the hope in all things, it is undeniable that people around him view him differently. Some with pity; some with disgust; and almost none with unfettered acceptance. David looks at others inability to accept him as their own flaws, but he also longs for intimacy. His two paid experiences were so distasteful for both parties involved that David has gone without rather than to see another women shy away from him in disgust.

The reclamation of self is a bit of a theme and one that is explored throughout.  David reclaiming his sexual identity; Annika figuring out that she is more than the timid day dreamer she had been characterized, and even the villain of the story looking to find redemption for his family name.

I’m trying to be as a vague as possible about some of the storyline because part of the beauty of reading a Brook’s book is to unwrap the package yourself.

He was quiet for a long moment. “I wish that I’d waited to fall in love, too.”

Her throat ached. “You can wait for it now.”

She felt his laugh against her hair, the shake of his head. This time, the kiss he pressed to her neck wasn’t openmouthed and hot, but soft and sweet.

This is such a beautifully rendered story about two people – (the timid Amish girl and the virginal Bionic Man) – and it is so completely different than previous Brooks’ books that I hope people who didn’t find The Iron Duke or Heart of Steel to their liking would at least try the first chapter in their book store. A

PS I mentioned on Twitter the Amish + Bionic Man and Meljean replied that it was totally fair to call David the 600 Livre man!