A celebration of the visual contributions of the bestiary—one of the most popular types of illuminated books during the Middle Ages—and an exploration of its lasting legacy. Brimming with lively animals both real and fantastic, the bestiary was one of the great illuminated manuscript traditions of the Middle Ages. Encompassing imaginary creatures such as the unicorn, siren, and griffin; exotic beasts including the tiger, elephant, and ape; as well as animals native to Europe like the beaver, dog, and hedgehog, the bestiary is a vibrant testimony to the medieval understanding of animals and their role in the world. So iconic were the stories and images of the bestiary that its beasts essentially escaped from the pages, appearing in a wide variety of manuscripts and other objects, including tapestries, ivories, metalwork, and sculpture.

With over 270 color illustrations and contributions by twenty-five leading scholars, this gorgeous volume explores the bestiary and its widespread influence on medieval art and culture as well as on modern and contemporary artists like Pablo Picasso and Damien Hirst.

Published to accompany an exhibition on view at the J. Paul Getty Museum at the Getty Center May 14 to August 18, 2019. 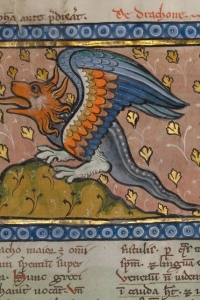 I enjoyed reading “Illuminating Women in the Medieval World,” another catalog published by the J.Paul Getty museum, so much that I pounced on the arc for this one. Medieval Beasts! Oh, I must see this.

First of all I learned that Bestiaries were not intended to be a real account of existing animals. Many were couched in terms of Christian allegories but they must also have been seen as entertainment in addition to serving up theological concepts and biblical narratives. They also gave us many colloquial sayings such as “king of beasts,” “crying crocodile tears,” “licking someone into shape,” “wily as a fox,” and “monkey on my back.” Virtues and vices we still associate with animals – nobility with lions or loyalty with dogs – were popularized in them.

Scholars examine various aspects of the books including branching out from the original Greek language “Physiologus” into Latin, European vernacular and Middle Eastern languages. Six bestiaries have survived in various dialects of medieval French. Another essay examines the trouble various scribes and illustrators had in coordinating the illustrations and text placement. 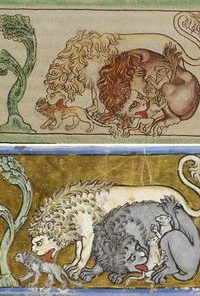 Historic critics such as Bernard of Clairvaux denounced them as the medieval equivalent of today’s “time suck” internet. “One could spend the whole day gazing fascinated at these things, one by one. instead of meditating on the law of God.”

To me the book appears aimed more at an academic audience. Some of the essays interested me more than others and this might not be the place to start in discovering bestiaries. There is a lot of information here and it’s not something that can be absorbed in one reading. I do wish I were nearer to the museum to be able to see these in person but with the lavish illustrations included, I think I have the next best thing. B- One warning – this appears to be available only as a hardback book and is priced accordingly.

→ Jayne
Previous article: DAILY DEALS: Favorites and a Freebie for Friday
Next Post: REVIEW: The Artist Who Loved Cats: The Inspiring Tale of Theophile Steinlen by Susan Schaefer Bernardo