Archangel’s War begins where Archangel’s Prophecy ended, with Elena in a strange chrysalis too small to hold her. Has Elena survived or is a repository of power for Raphael all that is left of her? 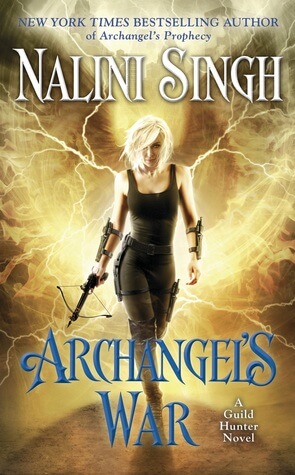 As the novel starts, Raphael, also dormant, mentally contacts his Seven and the Legion to tell them to clear the area. A huge explosion follows, and Raphael wakes next to what may be a remnant of Elena. Elena made Raphael promise to kill what’s left of her if her soul doesn’t survive, saying “I would rather die as Elena than live as a shadow.” Raphael and Elena have also made a pact to face everything together, even death. So Raphael waits to see if Elena has survived her transformation. If not, he will have to kill her, and then himself.

Of course, readers of the series can guess the answer to that question. Without Elena there would be no Guild Hunter series. She is the central character of the series. Nevertheless, the opening is suspenseful since we know that even if Elena has survived, she will have been changed.

It turns out that while Elena is a spirited as ever, intent on kicking the Cascade’s ass and saving Raphael and New York from whatever lies in store for them, she is also physically fragile, her skin paper thin and her body emaciated. Worse, she is wingless. To save her while she was trapped in the chrysalis, her body had to discard anything nonessential, anything she could survive without. The image of the midnight blue and dawn gold wings she once had is tattooed on her back, and she can almost feel their presence the way amputees sometimes feel their lost limbs.

Nourishment restores the rest of Elena’s body, but her mind remains troubled by the loss of her wings. She is also concerned about the anxiety her friends and loved ones experienced while her life hung by a thread. Her youngest sister, Eve, has been angry and acting out, and other family members, while outwardly calmer, were no less vulnerable and terrified. Nevertheless, Elena has survived, and she’s determined to face whatever comes next with courage.

And what comes next requires courage to face. Lijuan has been growing in power. No one knows if even the combined efforts of all the other archangels can defeat the being—goddess, in the eyes of some—now thought of as the archangel of death. A fog has rolled over China, and when it clears, those left behind are either dead or missing.

Across the world, ancient angels are awakening, posing a challenge to the survival of the Cadre, since it can be comprised of no more than ten. Further, one of these ancients is well known to Raphael, a figure from the past, and not one to be trusted.

Raphael is stalked by a power that whispers of godhood to him, and he must combat it. Every time he begins to see anyone as expendable, he fights that view with all of his strength, while Elena reinforces his humanity.

There are other changes in him and in Elena. Raphael literally gave Elena a piece of his archangel’s heart, and it remains to be seen how Elena’s body will process that archangelic power. Her body seems to have been scrambled to an extent, since in addition to the wings tattooed on her back there are tiny feathers at the tips of her hair, and a green Legion mark appears on her face.

Raphael, too, has undergone physical changes, both due to his sacrifice of a chunk of his heart and to the tiny pieces of Elena’s heart now floating in his bloodstream. His powers are changing as are Elena’s, and yet they must stand between Lijuan and New York.

The awakening of the ancients, the dangers and plagues unleashed by Lijuan, fluctuations in the climate and in the Cadre’s powers, all coalesce into one huge conflict—a war the like of which the world has not experienced in millennia. Will Elena, Raphael, their friends and their city survive? Or will some have to make the ultimate sacrifice?

In addition to introducing important new characters and elements, Archangel’s War has some things in common with Archangel’s Kiss and Archangel’s Legion.

In the former book, Elena came to consciousness in a new body and had to learn to adjust to being an angel. In this book, she emerges from a second coma and transformation and has to adjust again. She has lost her beautiful wings but acquired new powers.

The commonalities with Archangel’s Legion are that once again an epic conflict unfolds and again, the Legion plays a significant role in the war.

One of the enjoyable things is how this time the dynamics are different. Between those two earlier books and this one, Elena and Raphael have grown and so have their relationships—with each other, with the Legion, and with their network of friends, family members and allies.

I love how much Elena and Raphael have learned to trust each other and the other’s strengths, and how well they’ve gotten past the whole overprotective thing. In this book they are such a united front, despite facing many challenges, and it’s beautiful to see that. The love and worry their friends felt for them were touching, too.

While some of the reunion moments and power discoveries were familiar and/or easy to predict, not all of them were. Elena gets a few new abilities and one of them was truly delightful. And in terms of reunion scenes, a certain moment involving Dmitri brought a smile to my lips.

A couple of changes weren’t 100% convincing. A development with Illium’s mother, the Hummingbird, was welcome on the one hand but felt like it came out of nowhere. There’s very little in the Hummingbird’s past to foreshadow it.

The cold power that came to Raphael with the Legion mark was retconned a bit, too. In this book a different power tries to take hold of him, attempts to drive the humanity out of him. This time, Raphael is in a much different place, and his determination to reject those insidious whispers is great.

I loved how he hung on to his humanity. While Elena helped, Raphael has a lot more facility for fighting the coldness now because of the ways his life with Elena has changed him.

I don’t want to say too much about the last third of the book but there were some stupendous developments there. Included in the book were also interesting backstories for a number of both old and new plot threads: Caliane / Nadiel, Illium / Hummingbird, Alexander and I won’t say who. Even Cassandra gets one, and it’s intriguing. Additionally, there are some pivotal actions taken by Michaela, the Legion and Suyin.

The war was paced well in terms of the reading experience, but in terms of the plot, it read a little contrived that all the archangels would be absent from the fight with Lijuan for so long. Understandably, they didn’t want to abandon their territories to the tender mercies of her armies. But they all knew that if Raphael fell, so would the rest of them, so if nothing else, self-preservation should have gotten some of them to the battle with Lijuan faster.

On another, more fannish note, I wanted more about Elena’s relationship with her youngest sister. I love Eve and I want more of her. More Jean-Baptiste, Magda and Jeffrey would have been welcome too. I love most of Elena’s family relationships.

(Except her relationship with Beth; Beth is too one-note to interest me, and I’m often annoyed by her lack of independence and spirit. I’d love for her to grow and change further.)

A minor issue is that the book was a little *too* eventful. This is not something I usually complain about! But at the 60% mark I started to feel emotionally exhausted and there was still a lot of excitement to come.

The cliffhanger in Archangel’s Prophecy continued to chafe me. It had reverberations in Archangel’s War that brought back my feelings of frustration from that earlier reading experience. Not because much that was similar happened here, but because I was reminded of the earlier book. I’d kind of like to leave Prophecy behind and forget I read it, but of course the events of that book have to be dealt with.

Nevertheless, Archangel’s War is a strong, game-changing book and one many readers will love. The series feels like it’s back on track now, and since it’s one of my favorite paranormal romance series, I’m grateful. B.